PLYMOUTH, Mich. — It’s hard to imagine any company matching Tesla’s rocket-like rise. But if any electric car start-up could aspire to be the “next Tesla,” it would be Rivian.

Founded in 2009 and based here, 30 miles west of Detroit, Rivian is preparing to produce an electric pickup truck and a sport-utility vehicle. Both models are supposed to be on the road by the summer and will be made in a former Mitsubishi plant in Illinois. Rivian is also developing electric delivery trucks for Amazon.

What distinguishes Rivian, however, is its extraordinary roster of investors. Amazon is not just a customer; it has put a lot of money into Rivian. Others backers include BlackRock, Fidelity, T. Rowe Price and Ford Motor, which plans to introduce a large S.U.V. based on Rivian’s technology.

The latest injection of capital came Tuesday, when Rivian said it had raised $2.65 billion from a group led by funds and accounts advised by T. Rowe Price. Other investors included Fidelity and Amazon’s Climate Pledge Fund. The investment round values the company at more than $27 billion, and brings the total investment in the company to $8 billion since the beginning of 2019.

“We have been eagerly anticipating the arrival of 2021, and with it, the exhilaration of Rivian starting to deliver its revolutionary products to customers,” Joseph Fath, a T. Rowe Price portfolio manager, said in a statement.

A hefty war chest is no guarantee of success, and producing a new car from scratch is a monumental task for established automakers, let alone a start-up.

“The process of creating something like this is anything but simple,” R.J. Scaringe, Rivian’s founder and chief executive, said in an interview. “It’s a complex orchestra, several thousand parts coming from several hundred suppliers. It’s definitely far more complex than people think and far more complex than I thought it would be.”

Rivian is hoping to cash in on the same opportunity that Tesla identified and has advanced — the electrification of transportation. To most auto executives, there is now little doubt this is the way the world is going. In the last five years, Tesla has gone from making 50,000 cars annually to making ten times that many last year. General Motors, Ford, Volkswagen and others are investing billions to develop electric cars and trucks that eventually will begin supplanting fossil fuel models.

Rivian is different from Tesla in several respects. Tesla so far has grown by selling sporty sedans, a type of vehicle that is falling out of favor with consumers. Tesla intends to begin making an oddly angular, futuristic pickup, the Cybertruck, later this year. But it hasn’t yet put heavy focus on the trucks and S.U.V.s that make up 75 percent of the passenger vehicle market in the United States.

Rivian, on the other hand, is focused on producing “adventure” vehicles that owners can take off-road, an approach that means Rivian won’t often compete head-to-head with Tesla. “There’s a perception that this is winner take all, and that’s just wrong,” he said. “Consumers need to have different brands, different flavors. Our success is not at all mutually exclusive to others’ success.”

Rebecca Puck Stair is the kind of car buyer Rivian hopes to attract. A movie location scout in Albuquerque, N.M., she has been interested in buying an electric vehicle for a few years, but needs high ground clearance and four-wheel drive capability for assignments that take her into the desert. “That didn’t exist in the market,” she said. “A Tesla doesn’t fit my needs.”

About a year ago, she heard about Rivian for the first time and put a deposit down on an S.U.V. the next day — like Tesla, the company does not plan to sell through dealers. Ms. Stair has seen the Cybertruck, but the design is not for her. “It just screams ‘obnoxious guy truck,’” she said laughing.

Rivian’s truck and S.U.V., which start at $67,500, look more conventional, as if they could have been designed by Land Rover.

Unlike Tesla, which is trying to grow quickly, Rivian is taking measured steps. Last year, before the pandemic struck, it said it planned to make around 20,000 pickup trucks and S.U.V.s in 2021 and some 40,000 in 2022. It has not yet offered an updated outlook. It is aiming to have production capacity in Normal of 250,000 vehicles a year by the middle of the decade. The company has not disclosed how many orders it has taken, but a spokeswoman said it has customers lined up for all the vehicles it expects to make this year.

And even as other auto start-ups go public by merging with shell companies that have bundles of cash and stock market listings, Rivian is not eager to do so. “We want to launch, demonstrate our capability and let our performance speak for itself before we can look into being public,” Mr. Scaringe, 38, said.

That difference in the approaches favored by Rivian and Tesla probably has a lot to do with the men that lead the companies. 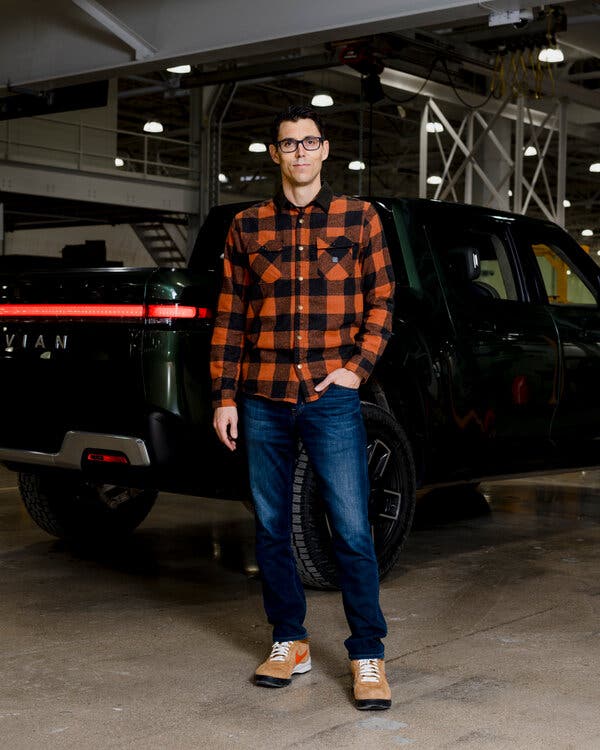 R.J. Scaringe, Rivian’s chief executive, is an engineer who tried to slash his carbon footprint at M.I.T. by getting around by foot and bike, taking cold showers and doing his laundry by hand.Credit…Lyndon French for The New York Times

Tesla’s chief executive, Elon Musk, is a disruptive force unlike anything the auto industry has seen in decades, perhaps not since Henry Ford. He has powered his company to stock market heights while attracting an army of fans. But Mr. Musk has also courted controversy — he has called government efforts to limit the spread of the coronavirus “fascist.” His Twitter posts have gotten him and Tesla into legal jams, including with the Securities and Exchange Commission. Not long ago he claimed Tesla would have a million self-driving cars on the road in 2020, but the company has yet to demonstrate a fully autonomous vehicle.

Mr. Scaringe, by contrast, is a bookish engineer, with a Ph.D. from the Massachusetts Institute of Technology. He once tried to slash his personal carbon footprint at M.I.T. by getting around by foot and bike, taking cold showers and doing his laundry by hand. His Twitter feed is so tame that one recent post was about the car color preferences of his children (blue).

In the second half of this year, Rivian hopes to start producing its Amazon delivery van in large numbers. Amazon is already testing prototypes on the road. The retail giant has made the trucks a central part of its strategy to reduce emissions, placing an order for 10,000, enough to keep the assembly line in Normal busy for a year or more.

Rivian still has a lot of work to do. On a recent afternoon, engineers in Plymouth were tinkering with a half-dozen R1T pickups in various stages of development. A few were hand-built models with screws visible in door wells — telltale signs of early prototypes. One was a more refined version that seemed a step or two away from the production version.

“People are working all hours,” said Ryan Kalb, a special projects engineer. “We are trying to move quickly, and we want to be doing it. We all want to see this happen.”

It was a similar story about 300 miles down the road at Rivian’s plant in Normal, a 3.4 million square foot factory that the company bought for $16 million in 2017. Since then, the plant has undergone an overhaul that cost more than $1 billion. Freshly painted and brightly lit, it has a long, winding assembly line where the R1T and R1S S.U.V. will be made. At the moment only a few are built each day.

Michael Ramsey, a Gartner analyst, said he’s eager to see if Rivian can avoid the mistakes that hamstrung Tesla a few years ago, when Mr. Musk rushed to ramp up production of the Model 3 sedan only to end up in what he called “manufacturing hell.”

“Is Rivian going to be a giant future competitor to Ford and G. M.? I don’t know,” Mr. Ramsey said. “But they have all these mega-investments. They have a strategic partner in Ford. They have contracts with Amazon. Of all the E.V. start-ups, they seem to have the best chance of making it.”