In the month ahead, the N.H.L. plans to employ the serene scenes of Lake Tahoe as a backdrop for two outdoor games. But the 19 days of competition in January brought a bit of chaos to the league’s schedule.

Since the season began on Jan. 13, dozens of players have been placed on the Covid-19 protocol-related absence list, which includes players who test positive and those who are being monitored because of close contact with someone who tested positive.

Despite the format changes and shortened schedule, the season has had its share of constants. Most of the league’s top teams from last season have continued to thrive, and superlative performers like Edmonton’s Connor McDavid and Leon Draisaitl raised their scoring pace to seldom-seen levels, continuing their offensive dominance from last season.

All statistics and standings are updated entering Thursday’s games.

The schedule has had to be rewritten.

The N.H.L. had a rocky path to resumption, and the turbulence did not end once the parameters of the 2021 season were set.

The Devils, Buffalo Sabres, Vegas Golden Knights and Minnesota Wild were affected by the virus as the calendar turned from January to February.

The league has made postponement decisions on a case-by-case basis. Unlike the N.B.A., the N.H.L. has set no minimum number of dressed players for a game to be staged. The N.H.L. has avoided some cancellations by having practice squads available to each team.

For Vegas, only the coaching staff was initially affected, and the team played its Jan. 26 game against the St. Louis Blues with its general manager and minor-league coaching staff behind the bench. But after at least three coaches and two players were added to the Covid-19 list, three of the Knights’ games were postponed.

The league’s stars are off to strong starts, and two have been traded. 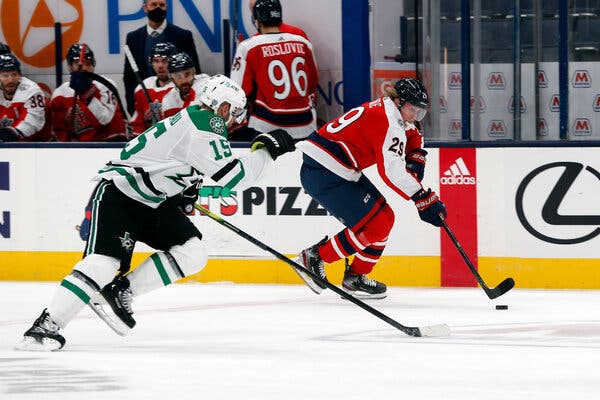 In this season of turmoil, few things have been certain. But the Edmonton Oilers’ two-headed monster of Draisaitl, the reigning most valuable player, and McDavid, the 2016-17 M.V.P., has been rock solid once again.

How copious has this tandem’s scoring been? The pair closed the month by combining for 11 points in an 8-5 victory over the Ottawa Senators. In January, they had a staggering 43 points in 11 games, with McDavid averaging two points per game and Draisaitl falling a point shy of that clip. McDavid’s eight goals tied him for the league lead in January with Vancouver’s Brock Boeser, and his 14 assists were second only to Draisaitl’s 15.

Toronto Maple Leafs forward Mitchell Marner and Colorado center Nathan MacKinnon were among the top five January scorers, but MacKinnon is out with a lower-body injury to start February.

A star was also involved in a blockbuster trade, with the Winnipeg Jets shipping the sniping winger Patrik Laine and the former first-round pick Jack Roslovic to the Columbus Blue Jackets for center Pierre-Luc Dubois.

In net, most teams have split starts more evenly among their top two goalies. Carolina’s Petr Mrazek, Vegas’s Marc-André Fleury and Vancouver’s Thatcher Demko have thrived in platoons. Mrazek and Fleury posted goals-against averages of one or below in January — they also ranked first and second in save percentage — while Demko did the same in his last three starts. Colorado’s Philipp Grubauer led the league in wins with six.

Kings center Anze Kopitar, 33, has also returned to peak form, as the 10-month layoff for nonplayoff teams benefited Los Angeles’ 30-something veterans. His 11 assists in January were the fourth most in the N.H.L. He had one more than the wunderkind defensemen Cale Makar of Colorado and Quinn Hughes of Vancouver, who finished first and second in last year’s Calder Trophy voting.

Some rookies have impressed early.

This year’s Calder Trophy voting for the N.H.L.’s top rookie may be dominated by players in their 20s, instead of teenagers from the last couple of drafts.

Goalie Vitek Vanecek, 25, was thrust into action for Washington after Braden Holtby departed for Vancouver in free agency, the backup Henrik Lundqvist announced he would miss the season because of a heart condition and the starter Ilya Samsonov tested positive for coronavirus, according to The Washington Post. Vanecek was the January rookie of the month after winning five games, tops among rookies.

But Kevin Lankinen, 25, leads all rookies in save percentage and goals-against average, having turned the corner on his competitors in the Chicago Blackhawks’ open casting call for a No. 1 goalie.

The top point producer and nickname-earner among rookies has been Minnesota winger Kirill Kaprizov, also known as Kirill the Thrill and Dollar Bill Kirill. Kaprizov, a 23-year-old Russian, was a fifth-round pick in 2015 who then charted a magnificent career at the professional and international level in his home country. He was the youngest player on the gold medal-winning side at the 2018 Olympics and an offensive leader for C.S.K.A. Moscow in the Kontinental Hockey League.

When he arrived in the N.H.L., Kaprizov became the first player in league history to record three points and an overtime game-winning goal in his debut. For an encore, he set up the overtime winner in his second game.

Devils defenseman Ty Smith, 20, tied Kaprizov for the rookie lead in both points and assists in January. Rangers defenseman K’Andre Miller, 21, leads all rookies with a plus-seven rating, an uncommon achievement for a player on a last-place team with a negative goal differential.

The Rangers held Alexis Lafreniere, the No. 1 overall pick in the 2020 draft, out of the World Junior Championships so he could prepare for the N.H.L. season. But he had just one point, a goal, in eight January games.

Five former Pacific teams merged with three former Central squads to make the West Division. The former Central Division teams — St. Louis, Colorado and Minnesota — occupied the first three positions in the standings before Thursday’s games. The Avalanche have one of the league’s best goal differentials at plus-14.

After moving to the Central, the Florida teams got off to strong starts, despite being affected by Dallas’s postponements. The Panthers posted a 5-0-1 record in January, while last year’s Stanley Cup champion, the Tampa Bay Lightning, darted out to a 4-1-1 start.

The North is the only seven-team division, yet it has five of the 10 highest-scoring teams thus far. Montreal — which was seeded 24th in the 24-team playoffs last season — leads the league in goals per game and in goal differential. The Canadiens are in first place, ahead of the Toronto Maple Leafs, who retooled their supporting cast during the off-season.

In the East, the Boston Bruins and Buffalo Sabres were tossed in with six former Metropolitan Division teams, including the Devils, Islanders and Rangers. In what promises to be a competitive race, the Bruins and Philadelphia Flyers are tied for the division lead.

San Jose Sharks forward Patrick Marleau, right, is closing in on the N.H.L.’s record for games played in a career. He debuted in the 1997-98 season.Credit…Brace Hemmelgarn/USA Today Sports, via Reuters

Alex Ovechkin returned to action on Saturday after his four-game absence due to the league’s coronavirus protocols. He resumed his pursuit of the career goal-scoring record, and in dramatic fashion. His overtime game-winner against Boston was his 708th goal, tying him with Mike Gartner, another Capitals great, for seventh on the career list. Ovechkin remained 186 goals behind Wayne Gretzky’s record entering Thursday’s game against the Rangers.

Another record that once seemed unassailable now appears likely to fall. San Jose Sharks forward Patrick Marleau last week played his 1,731st game, tying Ron Francis for fourth on the career list. If Marleau finishes the season with at least 45 games played, he will surpass Gordie Howe for the N.H.L. record. Howe, though, played an additional 419 games in the World Hockey Association.