JUST when you think there’s nothing left to binge, a whole host of new TV shows spring up to fill your schedule.

Thankfully, TV Mag is here to guide you through which new shows are worth your time this week.

Aquaman’s Jason Momoa leads the cast in this epic post-apocalyptic series from the mind of Peaky Blinders and Taboo creator Steven Knight.

The first series transported us to a dystopian future, where the entire human race had lost their sight and everyone had to find new ways to survive.

The birth of sighted twins within Baba Voss’ (Jason) tribe led to years of war as Queen Kane wanted them captured, and while Baba tried to protect his family, things didn’t go to plan as the end of series one saw Haniwa (Nesta Cooper) captured by General Edo Voss, Baba’s arch-nemesis brother.

The story picks up where it left off and Baba is fighting to reunite his family and save Haniwa – however, as he attempts to get away from the war and politics that surround him, he seems to only get more sucked in.

Guardians of the Galaxy star Dave Bautista is a great addition to the cast as Edo, who creates even more problems for Baba.

As with the first series, you can expect plenty of cracking fight scenes, more brilliant story-telling and a truly captivating and entertaining watch as the battle continues, and the great news is that it’s already been renewed for series three.

This juicy drama is your next binge-worthy watch as it tells the story of loving father, husband and brother Nick Brewer (played by Entourage actor Adrian Grenier), whose life is flipped upside down when he’s abducted.

His wife Sophie (Betty Gabriel) and sister Pia (Zoe Kazan) are frantic as they desperately try to find and save him, but they soon discover things about Nick that they never knew…

Across eight episodes, this compelling series delves into the age of social media and explores the fractures between our virtual and real-life personas.

All episodes available from Wednesday.

The Witcher: Nightmare Of The Wolf – Netflix

Henry Cavill’s portrayal of Geralt of Rivia in the hit Netflix series saw viewers immersed into the world of The Witcher based on the books of the same name by author Andrzej Sapkowski.

While we’ve got to wait until December to find out how Geralt’s story continues, this new addition to the fantasy world is sure to satisfy fans of the show.

This animated film is an origin story that introduces us to Geralt’s mentor, Vesemir. When he was young, Vesemir escaped a life of poverty to become a cocky witcher who loves nothing more than taking down monsters in exchange for coin and glory.

However, he soon finds himself embarking on a frightening but epic adventure to stop a strange new monster that has begun terrorising a politically fraught kingdom.

As he attempts to help save those in danger, he learns that some witchering jobs are about more than just money as he’s forced to confront the demons of his past.

Sanditon actor Theo James lends his voice as Vesemir in this action-packed and entertaining film.

The Walking Dead – Star on Disney+

Over the past 11 years we’ve followed the survivors as they’ve battled to stay alive through the face of old and new threats, but now their story reaches its conclusion as The Walking Dead returns for its 11th and final season.

Alexandria is a former shell of the place it once was following the carnage left behind by the Whisperers.

Its residents now include Maddie and her new group, the Wardens, as well as the survivors from the fall of the Kingdom and burning of Hilltop, however, the increasing number of people mean that Alexandria has more people than it can manage to feed and protect.

As tensions run high amongst the residents, it’s only a matter of time before it all kicks off again. While it’s sad to see the series go, here’s hoping that the Rick Grimes movie spin-off comes to fruition.

Kirstie Swain pens this comedy inspired about “the constant pressures and assumptions that women face when it comes to reproduction”.

It follows 36-year-old Suzie (Amy Manson), a woman who has not yet fully grown up, and her mature 21-year-old daughter Kate (Mirren Mack), who she gave up for adoption when she was 15.

It’s safe to say that they don’t have much in common, but as they get to know each other it’s clear that they can both learn a thing or two from one another, like Suzie teaching Kate to shed her inner old lady and Kate teaching Suzie how to act her own age. Downton Abbey’s Phyllis Logan also stars in this fun watch.

He’s All That – Netflix

It follows the same storyline, except the gender-roles have been switched. After a very public break-up, popular influencer Padgett Sawyer (Addison Rae) – who’s famed for her makeovers – bets that she can transform the most uncool guy in school into the next prom king, even Cameron Kweller an unsocial “total disaster”.

While it all seems to be going to plan, she doesn’t expect to like him quite so much. It’s not as good as the original, but it’s an entertaining reboot of the teen classic that even features a surprise acting role from Kourtney Kardashian.

Not only was he a member of one of the greatest bands of all time, but Sir Paul McCartney has also forged a very successful solo career spanning five decades.

This fascinating series sees Paul sit down for a rare and personal interview with legendary producer Rick Rubin to discuss life in The Beatles, to changing gear and embracing the rock of the 70s in the band Wings and his work as a solo artist.

He also opens up about the art behind his song writing, his own influences and some of the moments in his personal life that have inspired and informed some of his most iconic songs. Prepare to see Paul in a whole new light.

Outer Banks – Netflix
Despite its contemporary setting, there’s something irresistibly nostalgic about this sun-soaked US drama set on the Outer Banks of North Carolina. With his father missing at sea, John B and his pals from the wrong side of the tracks, aka the Pogues, embark on a twisty-turny treasure hunt after coming across a shipwreck, while keeping up their war with the town’s rich kids, known as the Kooks. With danger, romance and a gorgeous coastal setting, you’ll understand why the recent second series is one of Netflix’s most-watched shows.

Models: Street To Catwalk – BBC iPlayer
The second series of this highly watchable fly-on-the-wall show popped suddenly back on to BBC3 recently, and once you’ve started it you’ll <really> want to know how the new intake at Manchester modelling agency Nemesis fares. From Jordaine, who wants to find success after a turbulent family life, to former trouble-magnet Hal and Kyra, who’s plus-size with vitiligo, this is an interesting look at how the modelling industry has become multimedia, requiring edge and personality rather than just height and a certain build. But it also tells how the chosen ones must find courage and confidence, and often turn over new leaves to do well.

Hit & Run – Netflix
This nine-part Israeli-US thriller is the streaming equivalent of a double espresso. With a jaw-dropping action sequence or plot turn every 20 minutes or so, and coming from the makers of Fauda and remake of The Killing, it follows Tel Aviv tour guide Segev (Lior Raz) as he uncovers a string of shocking secrets about his American girlfriend after she’s killed in a hit-and-run accident. With nothing as it first seems, the series will test your abilities to both suspend your disbelief and not immediately play that next episode.

Kurupting The Industry: The People Just Do Nothing Story – BBC iPlayer
There’s something very sweet about this film, capturing as it does the path trod by mockumentary People Just Do Nothing, from spoof videos on YouTube to a cult TV hit and a forthcoming film. Dizzee Rascal, Martin Freeman, Clara Amfo and Craig David are among the fans describing how much they love the rawness and authenticity of the BAFTA-winning comedy starring Asim Chaudhry, Allan Mustafa, Hugo Chegwin, Steve Stamp et al, and it’s touching to see how delighted – and slightly awed – they are by its success.

Whiskey Cavalier – Sky On Demand
If we were an FBI super-agent, Whiskey Cavalier would be <our> codename too. This bouncy Alibi ‘action dramedy’ series boasts winsome leads in Scott Foley (Scandal, Grey’s Anatomy) and The Walking Dead’s Lauren Cohan – as a CIA agent – who form an elite spy team and must work together to crack crime while cracking gags. Plus, look out for jolly-hockey-sticks Brit Ophelia Lovibond who throws a potential spanner in the works of their partnership.

“I want you to help me break into the most secure vault in the world,” says treasure seeker Walter (Game Of Thrones’ Liam Cunningham) to young engineer Thom (The Good Doctor’s Freddie Highmore). That vault is underneath the Bank of Spain.

And so we strap in for this pacy Amazon Original film where Walter recruits a team of experts to recover Spanish treasure stolen by Elizabethan explorer Sir Francis Drake, which is now stored in the bank’s vault. The heist is timed around Spain playing in the World Cup, to create the ultimate distraction.

Naturally it’s the most impenetrable safe imaginable, and an added frisson of risk comes from the headquarters of the Spanish army being directly opposite the bank. It’s going to take ingenuity, zip wires, the requisite dressing-up as a cleaner and a very unsteady-looking ladder, with the plan going right and then of course the plan going wrong – “We need to abort!” – to try to get the job done.

It may not feel like a breathtakingly original idea, but it’s executed very well and has a pleasantly European flavour, boasting Spanish actors Luis Tosar and Astrid Bergès-Frisbey, Brit Sam Riley, Germany’s Axel Stein and the Netherlands’ Famke Janssen, and it’s from Spanish director Jaume Balaguero, who was behind those terrifying [Rec] films. Cracking stuff.

Available on Amazon Prime from Friday. 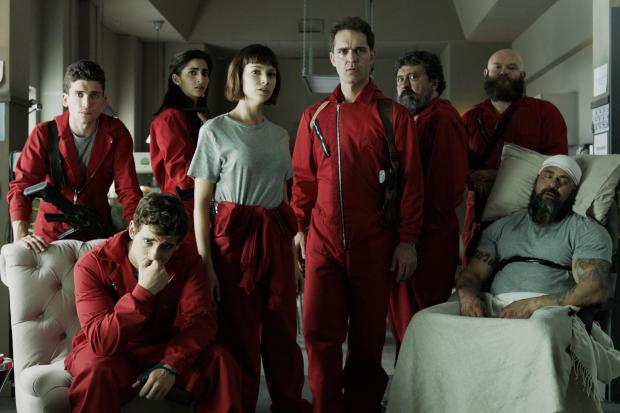 Money Heist, Netflix
This frenetic Spanish thriller justifiably appears on many ‘top foreign dramas to binge’ lists. It tells the story of a band of criminals brought together by intellectual mastermind the Professor to carry out an audacious robbery at the Royal Mint. It’s fast and furious, and a fifth series is coming to Netflix next month.

Hatton Garden, ITV Hub/BritBox
It was the 2015 robbery that beggared belief – and spawned several dramatisations, including this four-parter starring Timothy Spall, Kenneth Cranham and Brían F O’Byrne. Over an Easter weekend, criminals not exactly in the first flush of youth pulled off an enormous heist that shunned technology in favour of good old-fashioned drilling.

This Is A Robbery: The World’s Biggest Art Heist, Netflix
Netflix strikes true-crime gold again with this four-part docuseries about the jaw-dropping 1990 robbery of the Isabella Stewart Gardner Museum in Boston – when two men dressed as police officers entered the lavish building and soon after fled with $500m of stolen artworks. This one ticks all the boxes – an audacious crime, sting operations, mobsters, mysterious deaths and fake moustaches.

Good Girls, Netflix
Taking a more comedic approach to the heist genre, while never diminishing the emotional and financial stakes, this US show follows a trio of hard-up women who rob a grocery store, only to find themselves involved with some terrifying real criminals. Mad Men’s Christina Hendricks helms four series of gripping twists and turns.

TV Mag is available every Saturday, only in The Sun.