WASHINGTON — With the election over and Democrats in control of the White House and both chambers of Congress, officials in both parties are bracing for a bruising new battle with a different balance of power: the redrawing of congressional maps, where Republicans hold the advantage in many state legislatures across the country, including in key battleground states.

Republicans hold total control of redistricting in 18 states, including Florida, North Carolina and Texas, which are growing in population and expected to gain seats after the 2020 census is tabulated. Some election experts believe the G.O.P. could retake the House in 2022 based solely on gains from newly drawn districts.

“I would say that the national vote could be the same as this year two years from now, and redistricting by itself would easily be enough to alter who controls the chamber,” said Samuel S. Wang, the director of the Princeton Gerrymandering Project. He estimated that reapportionment alone could net the Republicans three seats, and gerrymandering in North Carolina, Georgia and Florida another five seats.

With Democrats holding a 222-211 edge, Republicans would probably need to flip just six seats to win back the majority. But Dr. Wang and other good-government experts cautioned that other factors could determine the majority.

Democrats will try to redraw districts in their favor in states like New York, Illinois and Maryland, they said. Some battleground states have adopted nonpartisan independent redistricting commissions. And President Biden did not create a wave of downballot victories for Democrats in the November elections, so there are fewer surprise winners who could easily lose their seats in 2022.

While partisan warfare on Capitol Hill draws most of the national attention, the battles over redistricting are among the fiercest and most consequential in American government. Reapportionment and redistricting occurs every 10 years after the census, with states with the fastest-growing populations gaining seats in Congress at the expense of those with slower-growing or shrinking populations. The balance of power established by gerrymandering can give either party an edge that lasts through several election cycles; court challenges — even if successful — can take years to unwind those advantages. 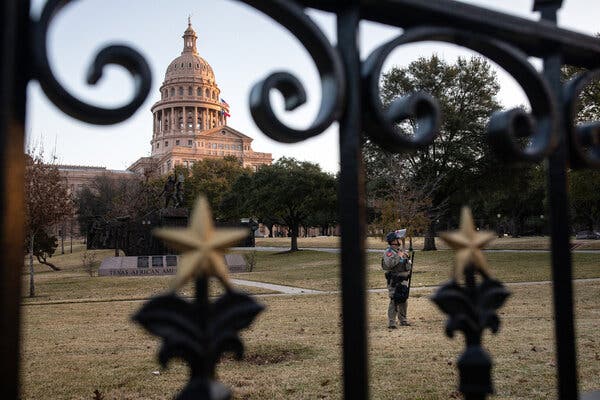 Outside of the State Capitol in Austin. Texas is expected to pick up House seats after the 2020 census results are tabulated.Credit…Tamir Kalifa for The New York Times

This year, Texas (with potentially three new seats) and Florida (two) are expected to be the biggest winners, while Illinois, New York and, for the first time, California will each lose seats once the Census Bureau makes the reapportionment figures official. That could give Republicans an inherent advantage in the midterm elections in November 2022 — regardless of Mr. Biden’s popularity then.

The bureau is not expected to deliver its data until late July, several months behind schedule, giving state lawmakers and redistricting commissions far less time than usual to draw the maps and deal with inevitable court challenges before the 2022 primaries begin.

Democrats have been fighting on slanted terrain with redistricting ever since Republicans ran the table during the 2010 midterm elections and drew themselves favorable gerrymandered maps in 2011 and 2012. Though courts invalidated them in states like Pennsylvania and North Carolina, many still remain.

Even though Democrats won control of the House in 2018, “the lingering effects of partisan gerrymandering, disproportionately by Republican controlled legislatures, make it harder for the Democrats to hold onto control or win control,” said Bernard Grofman, a professor of politics at the University of California, Irvine, “because they have to win probably closer to 52 percent of the national vote, or definitely more than 51 percent.”

A host of states have adopted independent commissions to draw maps, arguing that people without a vested interest would be more likely to draw fairer maps. Some good-government groups and political scientists have lobbied for more changes, such as the use of algorithms to determine district boundaries, though there is broad debate about what would be effective in erasing the partisan tilt of the process.

Adam Kincaid, director of the National Republican Redistricting Trust, is preparing for legal challenges to redistricting.Credit…T.J. Kirkpatrick for The New York Times

Republicans have, for the most part, adopted an elections-have-consequences attitude toward the mapping process. Adam Kincaid, the executive director of the National Republican Redistricting Trust, the party’s main mapmaking organization, said his energy will be directed toward the inevitable legal battles that will follow this year’s partisan map-drawing.

“If it wasn’t for lawsuits that were brought in Pennsylvania and North Carolina and Florida, Republicans would be in the majority today,” Mr. Kincaid said. The things to focus on, he said, were “defending maps drawn by Republican legislatures and also being more aggressive about going after Democrat gerrymanders in the blue states.”

As they look to reframe the electoral maps, Republicans are debating how aggressive they should be. They can push the boundaries and try to win the most seats possible in 2022, which puts them at risk of losing more seats in future years in the growing suburbs that are attracting waves of Democrats. Or they can aim for a smaller number of Republican districts that can create a more durable majority, with the potential to last the decade.

The central redistricting battlegrounds will be in Texas and Florida. Though both states are controlled by Republicans, the population growth has come largely from people of color and suburbanites — demographics that have trended toward Democrats during the Trump era.

“Their ability to manipulate the map to the tune of 30 seats like they did last time is no longer on the table,” said Kelly Ward Burton, the president of the National Democratic Redistricting Committee. “If the map plays out fairly, we will end up with more competitive seats than we have now.’’

Kelly Ward Burton, the executive director of the National Democratic Redistricting Committee, at her Santa Barbara home.Credit…Damon Casarez for The New York Times

Still, the combination of sophisticated mapmaking software and the abbreviated map-drawing period will give Republican lawmakers a far freer hand to put into effect favorable districts in the next year. And Republicans in states like Texas and Georgia will benefit from the Supreme Court decision in 2013 on the Voting Rights Act, which lifted the requirement that they get federal approval for redistricting.

“I’m very concerned,” said Manny Diaz, the former Miami mayor who this month became the new chairman of the Florida Democratic Party. He is spending his first weeks as chairman devising a plan to challenge and offset Republican efforts.

A decade ago, Mr. Diaz led the Fair Districts Now effort, which proposed a constitutional amendment offering guidelines for redistricting in Florida. Voters approved the measure in 2010, in time for the 2011 redistricting. But Republicans in the legislature ignored many of the principles, installing a highly gerrymandered map that helped Republicans win 17 of the 27 House seats in 2012 while President Barack Obama won re-election.

Although there were near immediate legal challenges, it was not until 2015 that the State Supreme Court struck down the redrawn map, saying eight districts had been aggressively gerrymandered to favor Republicans.

In Texas, a similar concern is rippling through the electorate. On Thursday, the State Senate’s redistricting committee held a virtual hearing, welcoming public commentary. For over two hours, pleas came in from across the state: please draw fair maps.

“I believe that gerrymandering is an existential threat to the nation,” said Rick Kennedy, who lives in Austin and ran for Congress as a Democrat in 2018 and 2020.

Though the data for reapportionment is still outstanding, Phil King, the Republican who leads the redistricting committee in the Texas State House, said almost all of the population growth had come from the triangle between Houston, Dallas and San Antonio. He noted that the committee was probably going to have to extend some rural districts into urban areas to keep the population at roughly 850,000 per district.

“If you’re in West Texas where most of the counties are 10 to 20,000 people, you’ve got to reach into those urban areas to pick up some population,” Mr. King said.

Yet those slivers into urban areas are what Democrats and good-government groups denounce as a contorted form of gerrymandering, weakening one area’s political voice by spreading it among other districts — and one that disproportionately affects people of color.

“We’ll continue to see racial gerrymandering and partisan gerrymandering in terms of packing in the urban areas,” said Allison Riggs, the interim executive director of the Southern Coalition for Social Justice, referring to a gerrymandering tactic of creating a heavily partisan district by “packing” it with supporters. Ms. Riggs argued gerrymandering lawsuits against the 2010 Republican-drawn maps in Florida, North Carolina, Tennessee and Texas.

Members listening as Speaker Nancy Pelosi, delivers an address in the House Chambers on the opening day of the 117th Congress in the Capitol Building.Credit…Anna Moneymaker for The New York Times

Democrats will draw lines for far fewer congressional seats. The biggest Democratic state, California, outsources redistricting to a commission, as do Colorado, Virginia and Washington. And Mr. Kincaid said Republicans were preparing to challenge Democratic maps in states like Illinois, Maryland and New Mexico.

In New York, where Democrats control redistricting for the first time since 1991, half of the Republican congressional delegation — either seven or eight members, depending on the outcome of one undecided race — could see their districts disappear if Democrats pursue the most aggressive gerrymandering available.

“It’s reasonable to expect that when the voters of New York have given Democrats a supermajority control of both houses of the legislature, that might create an opportunity that didn’t exist in the past,” said Representative Sean Patrick Maloney of New York, the chairman of the Democratic Congressional Campaign Committee.

Some election experts argued that Republicans were so successful at drawing gerrymandered maps 10 years ago that it would be difficult for them to add to their advantage now.

“The Democrats were able to win the House in 2018 despite the fact that there were some very gerrymandered states,” said Jonathan Cervas, a postdoctoral fellow at Carnegie Mellon University who studies gerrymandering.

Democrats are also in stronger position nationally then they were in 2011. Key battleground states like Pennsylvania and Wisconsin have divided government with Democratic governors who could veto maps, setting up likely court battles. In Virginia, Democrats won control of the state government in 2019 and in 2020 voters approved a nonpartisan redistricting commission, eliminating the ability of either party to dominate the redrawing of districts.

Other battleground states like Michigan and Arizona have established independent commissions, rather than partisan legislatures, that will draw the new maps.

Ben Diamond, a Florida state representative who leads the Democratic redistricting efforts there, is calling on his colleagues in the legislature to commit “to transparency and public engagement” and “a meaningful scheduled way of doing this.”

He added: “The sooner we can lay out how this work is going to be done, from a public engagement and a transparency perspective, the better,”