MELBOURNE, Australia — The intricate ballet begins at sunrise and ends after dark, a complicated series of movements requiring the utmost precision for what has long been a very simple task — getting tennis players to and from the courts so they can practice ahead of a professional tournament.

There is a strict routine to enforce social distancing: a series of knocks on hotel doors every five minutes, checking and rechecking that hallways are clear and that people are where they must be, whether that is in a van, or on the court, or the gym, or a dining pod, and then a thorough cleaning of their trail. The whole process, moving every available player to and from training in waves, can last almost 16 hours.

Alarms not going off or a little dawdling can cost players their precious daily chance to emerge from their rooms and prepare for the Australian Open, the first major tournament of the year, scheduled to start on Feb. 8.

“The amount of planning is amazing,” Kevin Anderson, the veteran South African, said of the regimen, which began early last week, soon after a fleet of players arrived in the country on specially chartered flights. “You don’t see anybody.”

This is what happens when you try to bring more than 1,200 people, including hundreds of athletes, from overseas to a country that has largely rid itself of the coronavirus, and that will go to great lengths to assure that it does not return to the community.

After months of intense, police-enforced lockdowns throughout the country, Australia has averaged just 11 daily cases the past two weeks. The limited number of travelers allowed in from overseas each day has accounted for most of the positive tests. In other words, in a country of more than 25 million people, community spread is largely nonexistent.

The effort to keep things that way, while holding the Open and multiple warm-up events, has been bumpy. Ten people arriving on three of the chartered flights for the events, including one player, have tested positive for the coronavirus.

That prompted health officials to order all 72 players on those planes to stay in their hotel rooms for 14 days.

One of those 72, Paula Badosa of Spain, tested positive Wednesday, seemingly dashing any hopes that players from those flights who have repeatedly tested negative since landing might be released early from the hard lockdown. Badosa, 23, flew to Australia from Abu Dhabi, on the same flight that transported Bianca Andreescu’s coach, Sylvain Bruneau, who tested positive for the virus shortly after landing in Melbourne.

All of the players had expected to be able to spend two hours practicing at a tennis center and 90 minutes in a gym every day during the two weeks leading up to the competitions. After the 72 players learned they were being locked down, organizers faced a mini-rebellion. 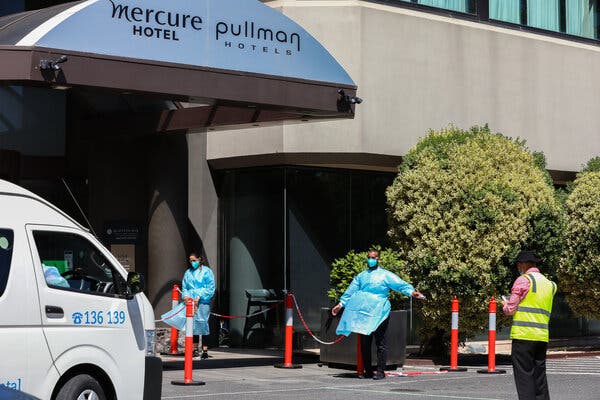 A hotel quarantine worker in protective equipment directing a van used to transport players and support teams to Melbourne Park for their practice sessions.Credit…Asanka Ratnayake/Getty Images

Melburnians, who were subject to a strict 111-day lockdown from June to October that closed schools and businesses and prevented them from leaving their homes for more than an hour each day, have reacted angrily. Ticket sales came to a standstill. Politicians denounced the decision to hold the competitions.

“We will be in that darkest hour for a while, and then there will be a dawn,” Craig Tiley, chief executive of Tennis Australia, which organizes the Australian Open, said Friday afternoon. “That dawn will start when the events start.”

Tennis Australia has pressed on, adhering to a series of protocols aimed at keeping the community safe amid the influx of foreigners. And nothing represents the lengths to which the organization will go to stage its tournaments better than the elaborate puzzle of getting players from three hotels to two tennis centers while minimizing the risk of spreading infection, either to one another or to the locals.

The strict process of moving the hundreds of players and their coaches through four different stops each day and keeping practice groups separate has not been an easy adjustment for players. In normal times, they set up hitting sessions with their fellow players on the fly, Anderson said.

Also, while the players have existed in bubblelike environments at tournaments since the sport returned in August after a long shutdown, they did not have to deal with such strict restrictions at the previous two Grand Slams, the United States Open in New York in late summer and the French Open in Paris in early fall.

Covid-19 was circulating in those communities, so the sport’s traveling circus did not present the kind of risk to those cities that they do here. In those cases, the players seemed to be more at risk than the public.

Donna Vekic, 24, of Croatia, said that she understood the need for the precautions, especially given how successful Australia has been in controlling the virus, but that following the rules has been stressful and tiring.

Donna Vekic after her training session on Wednesday.Credit…Asanka Ratnayake/Getty Images

Twice last week she had to be on the court at 8 a.m., which doesn’t sound bad, but she is not a morning person, and that court time meant a knock on the door at 7:45, which meant rising at 6:30 for coffee, a bite to eat, a pre-training session with her physiotherapist in the adjoining room — a warm-up that involves jumping rope and stretching with elastic bands — then gathering all her equipment so she could be ready for the knock on the door and to take the court as soon as she reached the tennis center.

“If you cannot adapt, you are in a bad position,” Vekic said Thursday.

The routine, however, has also been adapting.

Players who miss the window lose their slot and their chance to practice that day. And by Friday, the tournament organizers realized that they needed to redraw the schedule so players like Vekic could have fitness sessions when they arrive at the tennis centers, rather than being sent immediately to the courts for practice.

At Melbourne Park, the site of the tournament, and Albert Reserve, a nearby training center, each player practiced with one preselected partner for the first week. The groupings would grow to foursomes for the second week.

A marshal oversees each group,monitors the players’ movements and tells them when to move from one area to the next.

“You don’t really need that because you are checking the clock the whole time,” Vekic said.

Officials have set up a series of individual fitness pods on a low floor of a parking garage, and there are fitness tents equipped with cardio machines, medicine balls, kettle bells and other equipment next to some of the courts. When the players are moved to their next stations, a cleaning crew descends.

Then there is an hour to eat in another isolated location, before the van ride back to the hotel and a trek back to the room that is just as choreographed and regimented as the departure.

A worker sanitizing a fence at the Australian Open training grounds.Credit…Sandra Sanders/Reuters

Life is somewhat less complicated for the best of the best.

Serena Williams, Rafael Nadal, Novak Djokovic, Dominic Thiem, Naomi Osaka and Simona Halep are quarantining about 450 miles northwest of Melbourne, in Adelaide, where they are preparing to play an exhibition scheduled for Friday. Because of their stature, those superstars were allowed to travel with larger entourages than those accompanying other players, and while their training time is still limited, they don’t have to share a facility with hundreds of other players.

Joe Salisbury, a doubles specialist from Britain, had a wrench thrown into his practice plan: Rajeev Ram, his hitting partner and teammate, is among the 72 players who can’t leave his room for 14 days. Salisbury was told that no other player in his hotel and training center was in a similar situation. The schedule is too intricate to set him up with another player in a different hotel.

Fortunately, his coach, Rob Morgan, is a decent substitute.