It started with a simple sweater. After Harry Styles wore a color-block patchwork cardigan for a “Today” show rehearsal last February, knitters went into a kind of frenzy trying to reverse engineer the pattern.

So many TikTok and YouTube users shared their process using the hashtag #harrystylescardigan — racking up tens of millions of views — that the creator of the original cardigan, Jonathan Anderson of the brand JW Anderson, released an official pattern and tutorial video.

In the end, the original sweater was acquired by the Victoria and Albert Museum in London, praised by the institution as a “cultural phenomenon that speaks to the power of creativity and social media in bringing people together in times of extreme adversity.”

Knitters and crocheters have always been a resourceful (and community-minded) bunch. But the reverse-engineer-knitting craze unfolding on social media owes much to the current moment.

“Crafts bloom when people are stuck at home,” said Abby Glassenberg, the president and co-founder of Craft Industry Alliance.

The boon, Ms. Glassenberg said, is driven in part by crafters finding inspiration and encouragement from others. Patterns for scarves from “Harry Potter,” shawls from “Little Women” and Baby Yoda plushies are easily found on Ravelry, a popular website that knitters and crocheters use to publish patterns and connect with each other. 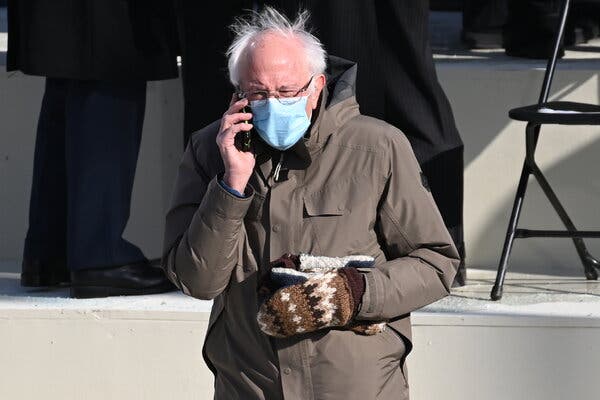 When Senator Bernie Sanders was spotted (perhaps you’ve seen some memes?) wearing large patterned mittens to the inauguration, knitwear fans turned to Ravelry in search of the pattern. And sure enough, in less than 24 hours, Meg Harlan, a 27-year-old climate scientist from the United States living in Copenhagen, had reverse-engineered one and posted it to the site.

“I wrote the pattern to knit a pair for myself, sort of as a joke, but decided to post it as I love the community that Ravelry has created for sharing ideas and excitement about knitting/crocheting around the world,” Ms. Harlan wrote in an email. “It has been great fun to see all the comments from folks who are excited to be able to knit a pair for themselves!” (The authentic Sanders mittens were made by Jen Ellis, a Vermont schoolteacher, who repurposed wool sweaters and then lined the mittens with fleece made from recycled plastic bottles.)

Reverse-engineered knitwear patterns are not necessarily designed for beginners. In Philadelphia, Caryn Shaffer, 32, spent months working out her pattern for the cream cable knit sweater worn by Chris Evans in the 2019 movie “Knives Out.”

“That movie is just full of really good knitting and knitwear,” Ms. Shaffer said. “The Chris Evans sweater in particular was inspiring to a lot of knitters.”

‘Quite Deconstructed, Quite Punk’

Last summer, as TikTok explainers on how to reverse engineer the Harry Styles cardigan proliferated, Mr. Anderson knew he had to jump into the fray with his original pattern. He asked Ruth Herring, a knitwear designer and pattern author in London, to develop an official one.

“I really wanted to show our appreciation so we are sharing the pattern with everyone,” Mr. Anderson said through a spokesperson, in an email correspondence after the pattern’s release. “I liked the idea of something that felt authentic and almost homemade, like you or your grandmother could have made it, but at the same time, it feels quite deconstructed, quite punk.”

“The pattern is perfect for a beginner,” she said in a phone interview. “You’re starting with your basic stitches and then moving onto seed stitch and then color work.”

Alas, crocheters who wanted to make the cardigan were left to work out converting the design on their own (crocheting being a different fiber art than knitting). In Newcastle-Upon-Tyne, England, Selina Veronique Bernier, 38, spent her time in lockdown doing just that. (She said she started seeing the cardigan all over TikTok after she was furloughed from her job at Fenwick’s, a high-end department store.)

In Los Angeles, Liv Huffman, 22, also started working out her own crochet pattern for the cardigan. The two-week process, which Ms. Huffman, a social media influencer known for her makeup tutorials, posted to TikTok, was so popular that Ms. Huffman’s creation will join the JW Anderson design at the Victoria and Albert Museum.

She started the pattern in a Google Doc after seeing the film in December 2019, but started working on it in earnest after being furloughed during the spring. Working out the pattern in a public document allowed other knitters to follow along as she worked out how to form the sweater’s unique cables.

Ms. Shaffer’s progress on the sweater has slowed, in part because she started a new job at The Philadelphia Inquirer, but she said that hasn’t stopped other knitters from completing their own sweaters by following her pattern.

“I made the pattern for free because I want as many people to be able to access knitting for themselves and find the same comfort in it that I have over the years,” Ms. Shaffer said.

There are endless ways to customize a piece of knitwear, which is part of the appeal for many makers. Both Ms. Herring and Ms. Shaffer said they have heard from other crafters who are putting their own spin on the patterns by changing the weight or color of the yarn used.

With so many first-time knitters starting during the pandemic, though, Ms. Herring said she worries about the sustainability of the materials being used. Many first-time crafters choose a cheaper synthetic yarn, but Ms. Herring suggests choosing a natural fiber yarn that will last longer instead.

Knitting or crocheting a garment is far from the quickest way to have a finished product. Manufactured knitwear abounds, but hand-making a cardigan, hat or scarf is a slow and meditative process (and has been for thousands of years). Slowing down and watching a project grow stitch by stitch — however imperfectly — is the deeply satisfying part.

“Knitting is confidence building,” Ms. Herring said. “Starting with two sticks and a bit of string or a crochet hook, you can create something beautiful.”