Even during the lean years of the late 1970s through the mid-80s, when Vietnam’s economy was strictly controlled by the government, Nguyen Phan Que Mai’s family managed to gracefully celebrate Tet.

The Indonesia-based author of “The Mountains Sing” was born in northern Vietnam but grew up in a southern coastal province in the Mekong Delta. Months ahead of the holiday, her father carefully tended their persnickety Mai tree to coax as many auspicious golden blooms as possible for the first day of Tet. Everyone pitched in to spruce up the house and prepare the family’s favorite foods, such as candied ginger, a warming northern Vietnamese nibble, and candied coconut ribbons, an iconic treat from the south.

Now, Ms. Que Mai doesn’t celebrate the New Year on Jan. 1. Instead, she waits for Tet.

“There is a sacred feeling of joy of a new beginning that comes with the ritualsof preparing for the New Year,” she said. 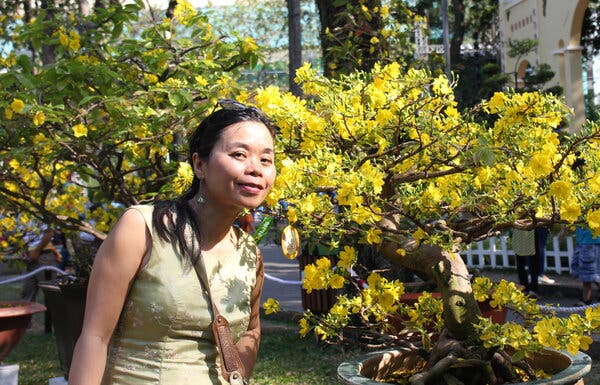 When Vietnamese people celebrate Tet, which falls on the Lunar New Year date of Feb. 12, they describe it as “an Tet,” an expression that translates to “eating the New Year.” (Tet Nguyen Dan, the formal name, means “feast of the first morning of the first day.”)

There is another popular saying that calls for the first month of the year to be a time for eating and idleness. Cooks prepare classics that are meant to be made ahead, so that they can feast and relax when the moment arrives: versatile pickles, silky sausages, brothy soups, jewel-toned sweetmeats and cozy kho, which are prepared by simmering meat in savory, bittersweet caramel sauce. The die-hards spend the weeks leading up to Tet producing graduate-level projects of hearty cakes of sticky rice surrounding ingredients like fatty pork and buttery mung beans. (The northern region’s version is called banh chung, and the southern and central regions’ iteration is named banh tet.)

Store-bought Tet treats are now the trend in Vietnam and abroad, but Ms. Que Mai, 47, feels they carry less meaning because they are not homemade. “People now have money but they do not have time,” she said.

Indeed, but it doesn’t endanger the spirit of Tet. There has been plenty of blending, rule-bending and innovation as people have migrated and emigrated, and celebrating Tet is doable wherever you are, no matter your circumstances.

Family elders hand out li xi, envelopes filled with money in the form of fresh new bills or coins, to children who offer them New Year’s wishes.Credit…Leah Nash for The New York Times

That’s as true for me as it is for others in the diaspora. My family fled Vietnam in 1975 when I was 6 years old and I’ve not spent Tet in the motherland since. Though I don’t live in Vietnam or in a Little Saigon enclave, the Lunar New Year remains strong in my DNA. It’s a state of mind more than a milieu.

Christine Ha, the chef of the Blind Goat and Xin Chao in Houston, spent her early high school years eating banh chung prepared by her paternal grandmother and aunt for their clan of 100, who descended upon their home to pay Tet respects to Ms. Ha’s grandfather, the family patriarch. Ms. Ha, 41, now deviates from the standard of preparing everything from scratch, purchasing some dishes from local Little Saigon shops.

But she still wants to capture the essence of those times with her family. “I learned to make banh chung, to pay homage to my Ba Noi,” she said, referring to her grandmother. “It’s the one tradition that I understood and loved.”

Christina Nguyen, 36, the chef of Hai Hai in Minneapolis, went rogue during Tet even as a child. When she was young — and picky — she avoided the requisite sticky rice cakes at big family feasts and ate only her favorites, like fried cha gio spring rolls and tender steamed banh beo rice cakes. At those gatherings, Ms. Nguyen gambled away her li xi, small red envelopes containing crisp new bills, in a popular dice game called bau cua tom ca. That childhood food and rebellious fun now inspire her restaurant’s Tet menu, which last year included fried spring rolls filled with venison, a nod to the stag that appears on the dice and mat in the game.

Bau cua tom ca, which means “gourd crab shrimp fish,” is a Vietnamese game where players bet on which dice images will match the pictures on the board.Credit…Leah Nash for The New York Times

In Oregon, Lisa Tran also grew up playing bau cua tom ca — and bingo — with her family. Four generations of Trans now observe the Lunar New Year together with gusto and gratitude. “We wouldn’t be where we are right now without the sacrifices that my parents have made,” she said.

Her mother and father escaped Vietnam by boat and spent about five years in an Indonesian refugee camp, where Ms. Tran, now 39, was born. In the late 1990s, facing financial uncertainty, they bootstrapped the opening of Tan Tan, their cafe and deli in Beaverton, Ore.

Ms. Tran’s 89-year-old paternal grandmother prepares banh tet, which they serve with other iconic southern Vietnamese holiday dishes like canh kho qua, a stuffed bitter melon soup. There is a penchant for assertive bitter melon during the holiday because, as Ms. Que Mai said, “When we taste bitterness, then we know what sweetness is.”

Lunar New Year is often framed as a cheerful occasion, but for the Vietnamese whose history is filled with both loss and triumph, the holiday itself is bittersweet. That feels especially poignant this year as the precarity of our times leads me to adopt a pared-down approach to usher in the Year of the Ox at my home in Northern California.

I’m skipping the sticky rice cakes (my mom already mailed some to me) and focusing instead on simpler comforts to remind me of home and heritage. There will be northern-style dishes based on family recipes, like dua hanh, slightly sharp rosy pickled shallots that are great for cutting rich foods like suon kho, pork ribs that are grilled then simmered to a soulful earthiness in bittersweet caramel sauce and fish sauce.

For southern Vietnamese thit heo kho trung, boiled eggs simmered with the braised pork are served whole to diners who then split them in their bowls of rice.Credit…Johnny Miller for The New York Times. Food Stylist: Rebecca Jurkevich. Prop Stylist: Paige Hicks.

You can’t have enough pork during Tet, so I’ll also cook a pot of tropical thit kho trung as a nod to southern Vietnam, where I was born. The braised pork and eggs are flavored by caramel sauce and coconut water, and eaten with rice and a refreshing pile of dua gia, a crunchy pickled bean sprout salad.

Throughout my weeklong Tet celebration, I look forward to munching on keo lac vung, a fragrant crunchy peanut and sesame candy. It’s one of many confections that I nibble on while thinking sweet, positive thoughts for the year ahead. That practice is something we could all use for a major reset in 2021. And eating Tet is the most delicious way to do it.