The messaging app Telegram has long been an engine of resistance and an annoyance for tyrants. Authoritarian leaders in Russia and Iran have tried to ban it. When protests broke out recently in Belarus and Hong Kong, Telegram was the glue that held democracy movements together in the face of violent onslaughts by powerful security services.

These days, though, Telegram is quickly becoming an online refuge for a different kind of resistance.

Far-right conspiracy theorists, racists and violent insurrectionists have been flocking to Telegram in recent weeks after being banished from the big American social media platforms following the storming of the Capitol building in Washington by a mob supporting President Donald J. Trump, who himself was cut off from Facebook and Twitter.

Twenty-five million new users flooded Telegram in the days after Twitter and Facebook, reacting to the Jan. 6 mayhem at the Capitol, purged users they deemed responsible for having incited violence or spread disinformation. The company’s founder, Pavel Durov, described it as “the largest digital migration in human history.”

The cascade of new users presents a new complication for Mr. Durov, who has positioned himself as an unambiguous ally of the street and free speech. He has promoted Telegram, which combines the features of Facebook and Twitter with encrypted messaging and a hands-off moderating philosophy, as a refuge for the oppressed.

With Washington and the rest of the United States on high alert after the Capitol violence, some fear that the features that make Telegram a popular tool for organizing resistance to authoritarian regimes could be used by the far right and extreme supporters of Mr. Trump to cause further mayhem. Already the F.B.I. has warned police chiefs across the country to be on the lookout for potential attacks by armed militia groups and racist extremists. 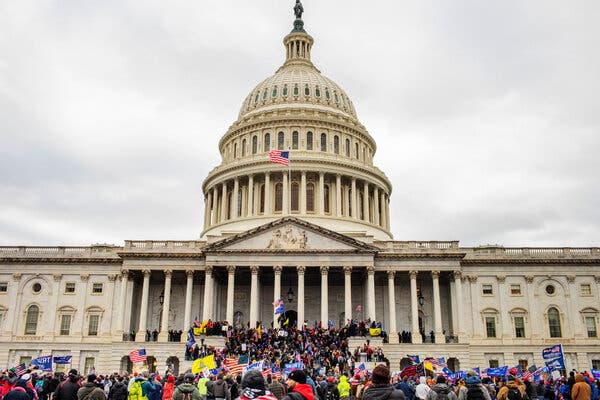 The storming of the U.S. Capitol on  Jan. 6 prompted Twitter and Facebook to boot users they believe incited  violence and extremism.Credit…Jason Andrew for The New York Times

“There’s a real push and pull between the people that are using Telegram — and messengers like it — for good, and the people who are using them to undermine democracy,” said Nina Jankowicz, a disinformation analyst at the Wilson Center, a nonpartisan research group. “We see the same openness and sense of connection that is used by democratic activists opportunistically exploited by extremists.”

Mr. Durov initially welcomed the influx of users and criticized the big American competitors for the expulsions, suggesting they were an effort to limit free speech. Last Monday, though, Mr. Durov announced that his team had blocked hundreds of posts from American channels calling for violence ahead of the presidential inauguration.

“For the last two weeks, the world has been following the events in the United States with concern,” Mr. Durov said in a post on his own Telegram channel. “While the US represents less than 2% of our user base, we at Telegram have also been watching the situation closely.”

Some have come to Telegram out of privacy fears after WhatsApp informed its customers that it was sharing information with its parent company, Facebook.

But many were refugees who had recently been banished from other services for posting extremist, insurrectionist views. The Proud Boys, a far-right militant group, directed new followers to chat groups on Telegram with names like Hate Facts and Murder the Media, and established right-wing accounts saw significant spikes in membership.

The platform got a boost on the right when Enrique Tarrio, the leader of the Proud Boys, sent a message to his followers singing Telegram’s praises.

The Proud Boys leader Enrique Tarrio, center, speaking at an Oregon rally in September. He called Telegram “the darkest part of the web.”Credit…Diana Zeyneb Alhindawi for The New York Times

It is not the first time Telegram has had to contend with unsavory characters taking advantage of the same features that draw in democracy activists. After a similar crackdown by Twitter on Islamist radicals a few years ago, the Islamic State migrated to Telegram and used it to orchestrate terrorist attacks, spread propaganda and find recruits.

Several attacks in France were carried out by Islamic State militants who used Telegram’s encrypted chat function to coordinate their actions. When the French authorities sought information about the attackers from Mr. Durov, he replied that secrecy protocols made getting user information impossible, even for Telegram employees.

Mr. Durov, an extreme libertarian who is often described as Russia’s Mark Zuckerberg, has for years faced off against the Kremlin’s efforts to silence him in his native Russia and now lives in self-imposed exile. He founded Telegram with his brother in 2013 as a digital outpost of free speech after the Kremlin stripped him of control over Vkontakte, a popular social media site he created as a Russian version of Facebook.

Telegram has no ads or outside investors and is funded almost entirely through Mr. Durov’s personal fortune. It is hosted on multiple servers spread around the world, ensuring that no one government can exercise total control over the service or gain access to information about its users.

“Telegram has never yielded to pressure from officials who wanted us to perform political censorship,” Mr. Durov wrote in an online missive a few years ago.

As a resistance tool, it acts as a kind of social media Swiss Army knife, with a newsfeed similar to Facebook’s or Twitter’s for sharing uncensored information as well as an encrypted messenger service for secret communications.

Telegram, too, faltered at first. But Mr. Durov quickly intervened, enabling what he called “anti-censorship tools” to keep Telegram running, probably including what is known as domain fronting, which disguises the source of online traffic.

After Mr. Lukashenko declared victory and protesters poured into the streets, Telegram was a source of uninterrupted information and a platform for organizing resistance. The Telegram channel for Nexta, a news service run by Belarusian exiles in neighboring Poland, began providing logistical support for its two million local followers, interspersing videos of a police crackdown on protesters with instructions about, and march routes for, daily demonstrations.

“For three days the internet was shut down in Belarus, and no one in the world knew what was going on,” Stepan Svetlov, who runs Nexta, said. “The only source of information was Telegram.”

In Iran, where Telegram usage takes up 60 percent of the country’s internet bandwidth, the app was a crucial platform for organizing and spreading antigovernment protests in 2017 and 2019. It enabled protesters to share videos of violent crackdowns when journalists and cameras were banned.

The Iranian government tried to ban the app in 2018, but it made little difference. Iranians just used VPN networks to circumvent the government blockage.

“It’s a hole in the censorship walls of the Islamic Republic,” said Omid Memarian, an independent analyst on human rights and technology in Iran. “It is the dominant way to stay informed and connected and to organize. Everyone uses it, even grandparents who don’t typically navigate technology,” he said.

Telegram was a useful tool for democracy advocates in Iran during protests against the government in 2017. Iranian efforts to ban  the app the next year made little difference. Credit…Associated Press

Mr. Durov’s attitude toward law enforcement has caused him trouble in his native Russia. In 2018, a Moscow court granted Russia’s communications oversight agency the authority to block Telegram after Mr. Durov refused to give the F.S.B., the country’s powerful domestic intelligence agency, access to users’ encrypted messages.

The ban was short-lived though, and because Telegram is not reliant on servers in Russia, largely ineffective. The ban was lifted last year in a decision welcomed not only by the Kremlin’s opponents, but by the country’s top officials, who now seem to take a kind of patriotic pride in Telegram’s Russian origins.

Dmitri S. Peskov, the spokesman for President Vladimir V. Putin, uses it. So do many of Russia’s top propagandists, including Margarita Simonyan, who informed her followers this month that she planned to move all her communications to Telegram exclusively. The only exceptions, she joked, were the two assassins behind the 2018 poisoning of a former Russian spy in Britain, who famously claimed in an interview with Ms. Simonyan to be sports nutritionists and not intelligence officers.

Shortly after Twitter blocked Mr. Trump’s account, Dmitry Polyanskiy, Russia’s deputy ambassador to the United Nations, urged the president to move over to Telegram as well.

“Seems like you don’t enjoy freedom of speech in your own country any more!” Mr. Polyanskiy wrote.

So far, Mr. Trump has refrained, though a fake account created in his name already has nearly 800,000 subscribers.

On Friday his son, Donald Trump Jr., announced that he had joined Telegram and urged supporters to follow his channel.

“Big Tech Censorship is getting worse and if these Tyrants banned my father, the President of the United States, who won’t they ban?” he wrote on Twitter. “We need a place that I can connect to you guys that represents Free Speech. That’s why I joined Telegram.”