TALIBAN chiefs yesterday ordered British paratroopers out of Afghanistan in a week’s time — or risk slipping back into war.

The militants warned any delay would shatter the uneasy truce at Kabul Airport and added: “It’s our red line”.

It came as Defence Secretary Ben Wallace admitted that the airlift of 7,000 Brits and Afghans was “down to hours now, not weeks”.

PM Boris Johnson will use today’s G7 meeting to urge US President Joe Biden to extend the August 31 deadline so as many people as possible can be evacuated.

They spoke by phone last night and agreed that the West must take a “common approach” in dealing with the Taliban.

If Mr Biden refuses to extend the mission, some of the next seven days will be spent airlifting troops, not evacuees, out of Kabul.

Defence chiefs are racing against time to liberate all those who are desperate to flee.

Every available RAF transport plane has been diverted to support the airlift with three C-17s, three A400 Atlases and two C-130 Hercules flying in and out of Kabul a day.

An RAF source said another 12 — including civilian charters — were collecting passengers in the Gulf and relaying them to the UK.

US officials said flights out of Kabul would increase significantly in coming days.

🔵 Read our Afghanistan live blog for the latest updates

Around 230 planes worldwide are now supporting the mission including 18 civilian aircraft commandeered from US carriers including Delta, American Airlines and United Airlines.

Around 1,800 Brits and 2,275 Afghans who have worked with the UK are still in Kabul waiting to be airlifted.

Some 1,800 were brought out on Sunday, putting the UK on track to rescue all evacuees on time.

Since August 14, US and Nato flights had by last night evacuated 37,000 people — but the mission has been dogged by chaos.

At least 21 people have been killed in crushes, falls and shootings at Kabul Airport.

An Afghan guard was killed and three people were wounded on Monday after US and German troops opened fire on “unknown assailants” in a skirmish near the airport’s north gate.

British troops are based on the airport’s south side where four people died in a crush last week.

Teams of SAS and troops from 1 Para, the Special Forces Support Group, have been leaving the airport to collect British citizens from secret locations in Kabul.

But US troops are banned from stepping outside its perimeter, security sources claim.

Taliban spokesman Suhail Shaheen claimed yesterday that Afghans wishing to leave next month will be free to take ­commercial flights if they have visas “issued by the concerned country”.

But speaking to The Sun from Qatar’s capital Doha, where the Taliban’s political office and peace negotiators were based, he said: “All forces should withdraw on the timeline they announced.”

Speaking in Scotland yesterday, Defence Secretary Mr Wallace confirmed the PM would ask the US to “extend” the deadline for evacuations at the virtual G7 meeting.

He ruled out continuing the airlifts if the US leaves.

Armed Forces Minister James Heappey said the Taliban would “get a vote” on the deadline.

He said: “It’s just the reality. We could deny them the vote. We have the military power to stay there by force, but I don’t know that the humanitarian mission we’re embarked on  . . . is helped by Kabul becoming a warzone.”

He admitted not every Afghan who deserved refuge in Britain would get out — and said: “It breaks my heart.”

Downing Street has vowed to double the figure to £286million, with the money funnelled through charities to keep it out of the hands of the Taliban.

He will also call on world leaders to provide resettlement schemes for Afghans. The UK has vowed to give a home to 20,000 over the next four years.

The PM said yesterday: “Our first priority is to complete the evacuation of our citizens and those Afghans who have assisted our efforts over the last 20 years.

“But as we look ahead to the next phase, it’s vital we come together as an international ­community and agree a joint approach for the longer term.”

The angry Talibs have been seen swinging guns to beat back panicking crowds at the edges of the sprawling airport.

In stark contrast, the professional British servicemen and women have done all they can to treat Afghans in a kindly fashion in their homeland.

Several have been seen doling out water to thirsty adults and children in the baking heat.

Translator on flight out 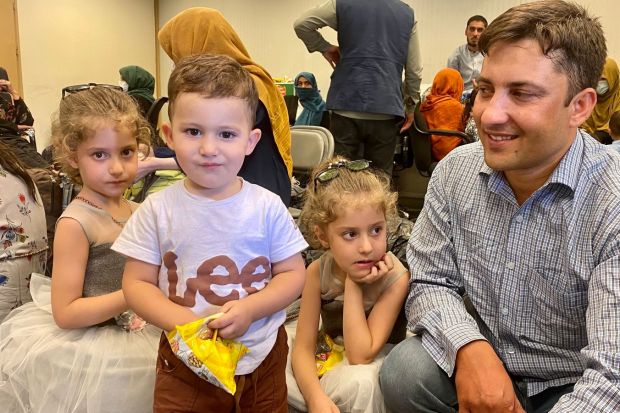 A UK military translator and his family have boarded a vital flight out of Afghanistan.

Nooragha Hashimi, who worked in Helmand with the Royal Engineers, was put on an evacuation plane with his five-year-old twins, Asna and Sana, his son and his wife.

Asked if he thought he was at risk, he said: “Yes, they [the Taliban] were gonna kill me.

“It was like everybody was scared [about] what they’re going to do, and the first time they’re saying we’re gonna do nothing [to] anybody, but nobody knows if it will be the same as 1996 [when the Taliban previously captured Kabul].”