TAMPA, Fla. — One year ago, Dan Newby was on top of the world.

Five buses from his company, Crossroad Tours, picked the Kansas City Chiefs up from the airport when they returned home from the Super Bowl as conquering heroes. Days later, those buses transported quarterback Patrick Mahomes, Coach Andy Reid and the Lombardi Trophy to Union Station in downtown Kansas City as part of a victory parade.

The next month, as the coronavirus shut down almost all nonessential travel, the bottom fell out of Newby’s business. A packed schedule of trips for sports teams, church groups and schools was wiped clean.

“Every bus we had was parked from March 13 to September 14,” Newby said.

The Super Bowl is still the biggest event in American sports, and most fans will have only a few opportunities, if any (sorry Lions fans), to watch their team play in it, let alone attend in person. This Sunday the Super Bowl will once again feature the Chiefs, this time against the Tampa Bay Buccaneers, but Kansas City’s team will be about the only constant from last year.

The most obvious change, for one of the most coveted tickets in sports, is that Tampa’s Raymond James Stadium will be only a third full. Although 7,500 of the 25,000 seats will be filled by vaccinated health care workers, attending for free as guests of the N.F.L. and presented with gifts of face masks and hand sanitizer as they enter, there are still plenty of fans buying tickets, selling tickets, scheming to attend or traveling to Tampa without a ticket just to soak up the atmosphere.

Karen Ricardi, who works as a nurse manager at a hospital in Lutz, Fla., will be one of the lucky few after winning tickets through a drawing. A Massachusetts native who has lived in Florida for about 16 years, she considers herself a fan of both the Buccaneers and the New England Patriots — Tom Brady’s teams, present and past.

“I never thought I’d ever go to a Super Bowl because the cost is so prohibitive,” she said. “It still feels surreal.”

Jeremiah Coleman, a Chiefs fan who owns a car dealership in Wichita, Kan., will be there, too. He planned to fly to Tampa on Thursday evening. 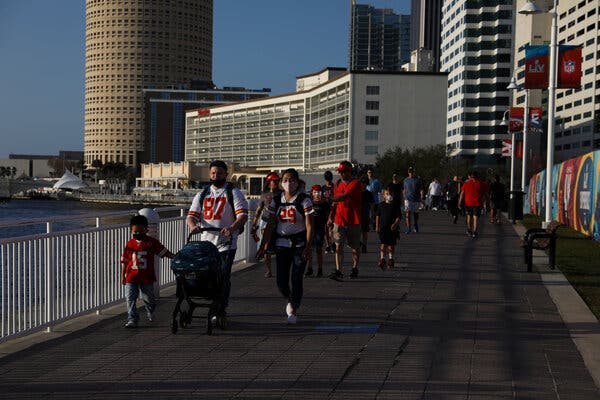 Kansas City fans on the Tampa Riverwalk during events for the Super Bowl LV.Credit…Eve Edelheit for The New York Times

Coleman said he thought about traveling to see his team in the Super Bowl last year, but chose to host a party for his friends instead. “I’ve had these friends some 20 or 30 years, and we’ve never got to watch the Super Bowl together,” he said. “So I said, ‘I don’t want to leave all them.’”

This year, however, he plunked down $6,753 for a ticket, in part because his cousin, who was born and raised in Kansas City, now lives in Tampa. Earlier this season, he made the same trip, to watch the Chiefs play the Buccaneers in the same stadium on the weekend after Thanksgiving.

Coleman’s cousin, Sara Carrasquillo, also bought a ticket, which she acknowledged was quite expensive. But since she lives in the Tampa area, she has no travel costs. “I just realized that I can always make the money back,” said Carrasquillo, who owns a waxing studio. “It’s not going to take me a whole lot of time to make it back, as if maybe I worked for someone.”

Neither of the cousins seemed to have many health concerns about attending. Carrasquillo said she believed that the necessary precautions were being taken, and that because she has healthy eating habits she is in a “good position to fight off any virus.” Coleman said that he would wear a mask and wash his hands consistently, but that his mantra was to “be conscious but not scared.”

Ultimately for Coleman, the allure of watching his favorite team in the Super Bowl overrode all other considerations. “On my deathbed, this will probably be one of the top five days I remember in my life, you know?” he said.

Getting to see the Super Bowl in person may be tougher than ever. Chiefs fans hoping to attend the game could buy tickets through the N.F.L. or the team, or through companies that work with the league to sell packages that can include airfare, lodging, food and entertainment. Or they could buy up seats purchased by the dejected fans of teams who didn’t make it.

Christian Mollon, a Buffalo Bills fan who now lives in Kansas City, paid almost $20,000, including fees, for two Super Bowl tickets before the A.F.C. championship game against the Chiefs. He had a hotel room reserved in Tampa, and was just waiting for the Bills to win. They did not.

Christian Mollon, a Buffalo Bills fan who now lives in Kansas City, paid almost $20,000, including fees, for two Super Bowl tickets before the A.F.C. championship game against the Chiefs.Credit…Chase Castor for The New York Times

He said that he got a number of nibbles for his tickets, but that while he tried to sell them at cost, most potential buyers tried to talk him down.

What if nobody is willing to pay full cost? Well, his wife would be furious, Mollon joked last week, “but we’re taking a trip down to Tampa.”

(That won’t be happening. Over the weekend he was able to unload the tickets for about $17,000, covering the ticket costs but not most of the fees he had paid.)

For those traveling from Kansas City but unsure about flying, Newby — who said his bus business declined by 85 percent in 2020 — came up with a solution. He has been advertising his entertainer buses, the kind normally used for concert tours, on Craigslist. For $9,000, he said, a close group of travelers can get a bus that sleeps 12 — meaning no hotel costs in Tampa — and a driver.

“You have to have 12 people in one family, or 12 people in a group of friends, a pod that has the money to go there,” said Newby, whose company sent 56-seat charter buses to the Super Bowl outside Miami last year. As of late last week, he had not found any takers.

About the only consolation during a tough summer for Newby was the Chiefs giving him a Super Bowl ring in recognition of his years ferrying the team around.Credit…Chase Castor for The New York Times

The vast majority of Chiefs fans face a different complication: What to do about a Super Bowl party? Dr. Anthony S. Fauci, the nation’s top infectious disease expert, has advised people not to invite friends and family over on Sunday, in order to slow the spread of the coronavirus. “Just lay low and cool it,” he said on Wednesday.

Such messaging has been a boon for James Hansen, the owner of Easy Audio Rental in Olathe, Kan. Hansen’s company rents out projectors and other audiovisual equipment, and he said he expected to be sold out for the first time since 2015, when the Kansas City Royals were in the World Series.

Rather than have everybody crowd around a television in the living room, he said, fans may try to play it safer — and still have a crowd — by setting up a projector on the front lawn or the driveway.

“These Midwesterners don’t mind a little cold,” Hansen said. They had better not: The temperature there on Sunday is projected to top out at 30 degrees.

Chiefs fans, however, are used to attending cold-weather games at Arrowhead Stadium. Hansen said his brother and father, who have season tickets, followed Chiefs games all season by setting up a television in the garage and watching from the driveway.

Hansen said his family was no different from so many others these days. “They really just want to be together,” he said.