Carolyn Blocka does not mess around with her annual Super Bowl party.

Last year, as 15 of her friends crowded into her Toronto apartment, she assembled a spread that included chili, pulled pork, Hawaiian meatballs, chips and guacamole, pizza, chicken wings and the obligatory “healthy” salad. For dessert, Ms. Blocka made cookies and bought doughnuts decorated with the logos for the Kansas City Chiefs and the San Francisco 49ers.

The pandemic has canceled this year’s party, however. Instead, Ms. Blocka, a rabid Los Angeles Chargers fan, will watch Sunday’s Super Bowl with one friend, sitting on fold-up chairs in her garage, with the door open and the temperature outside expected to be around 20 degrees Fahrenheit at kickoff.

“It’s weird, but I miss making all of the preparations for the party,” said Ms. Blocka, a law clerk. She and her friend are going to order a restaurant’s takeout package — a Chicago-style pizza, wings and some craft beers for $50. “I’m still going to get some doughnuts, though.”

In the interest of preventing the Super Bowl from turning into a superspreader event, public health authorities are pleading for viewers to be like Ms. Blocka and watch this year’s game with family or only a small group of friends. And while Sunday may be a little less lively at home without a raucous crowd, snack companies and delivery services are expecting the socially distanced circumstances to be a boon for sales.

Snack companies, whose sales have soared as consumers nibble their way through the pandemic, know that Americans traditionally load up on guilty pleasures for the Super Bowl. But PepsiCo’s Frito-Lay division, for instance, was making slightly more snacks than it did in last year’s run-up — nearly 70 million pounds this week, enough to fill 7,000 trucks — based on the expectation that smaller gatherings will result in increased purchases of chips.

“We saw that play out in the holidays, which is why we’re investing in more capacity and more delivery around the Super Bowl in retail,” said Mike Del Pozzo, the chief customer officer for Frito-Lay North America. “We anticipate that week will be massive.”

Restaurants that specialize in football-friendly foods like pizza, chicken wings, mozzarella sticks and tacos are also bracing for a busy night. 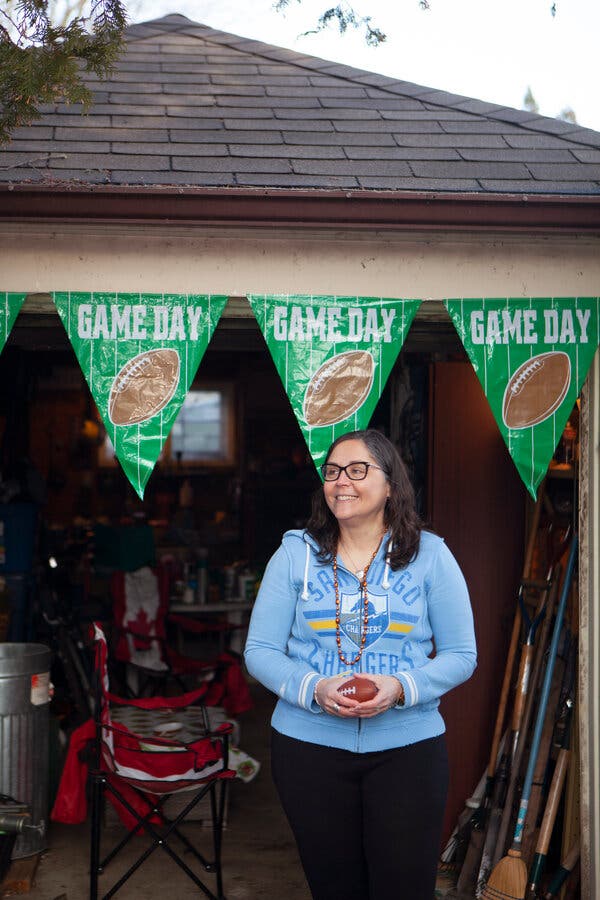 Carolyn Blocka, host to 15 friends a year ago, plans to watch the game on Sunday with just one. In a garage. In subfreezing Toronto.Credit…Angela Lewis for The New York Times

“The Super Bowl is a huge night for us,” said Lyle Tick, the president of Buffalo Wild Wings. “It’s one of our biggest nights of the year.”

Last year, the restaurant chain sold more than 11 million wings on Super Bowl Sunday. This year, Mr. Tick said, he expects to meet or exceed that number even with his 1,200 restaurants around the country facing varying dine-in restrictions.

“We expect to see similar total demand, but an increase in off-premise ordering and, if I was a betting person, more parties of smaller size, so smaller order size as well,” he said.

For millions of people, whether football fans or not, the Super Bowl has long been an excuse to gather at a bar or restaurant or in someone’s living room to party, eat food that is not remotely healthy, throw back some beer or cocktails and laugh at the commercials. Some even pay attention to the game.

“It’s somebody’s job to bring the wings,” said Krista Millard, a self-described football fanatic who is an office manager at an architectural firm in Pittsboro, N.C. “Somebody else brings the beer. Somebody brings the kids’ food. Somebody is grilling out. There’s some North Carolina barbecue, of course, and a lot of people hanging out, but really, only four or five of us are actually watching the game.”

The pandemic has upended that ritual. David Jenkins, a pastor in Los Angeles who goes by D.J., is heeding the advice of health professionals this year. The watch party he attended the past few years, which typically draws 50 people, has been canceled. Instead he’ll watch the game from his couch, with his wife and 6-year-old son and 11-year-old daughter.

“We’ll make some sort of Velveeta cheese dip thing — a splurge food I don’t normally have — and then I’ll balance it with some celery sticks,” he said.

Mark Ridley-Thomas, a member of the Los Angeles City Council, planned on ordering his food well in advance. For the last five years, he hosted a Super Bowl viewing party for about 300 people as a fund-raiser for homelessness and emancipated foster children. This year, he’ll watch the game from his living room couch and order wings from Hotville Chicken.

“If the pre-order doesn’t work, I will show up at the restaurant at 6 in the morning and camp out until someone hands me some wings,” Mr. Ridley-Thomas said with a laugh.

Snack companies and restaurants with takeout menus aren’t the only ones girding for a rush of orders just ahead of kickoff.

For weeks, a group of analytics and finance teams inside DoorDash have been creating algorithmic models to predict hour-by-hour demand on game day. The forecasts are based partly on past Super Bowls, but also on data that has been collected and analyzed for holidays during the pandemic, including New Year’s Eve, Cinco de Mayo and Father’s Day, said Jessica Lachs, a vice president of analytics at DoorDash.

Figuring out when orders for nachos and ribs are going to skyrocket, and when the company needs to offer peak pay or other incentives for “Dashers” to hit the roads and make deliveries, involves a complex calculus.

Viewers on the East Coast, for instance, will begin putting in their orders in the late afternoon and through the first quarter of the game, which has a 6:30 start time. On the West Coast, a wave of orders will come in toward the end of the game and after it’s over. Then, the East Coast may see a second ordering wave — fueled by that “I’ve had four beers and now I’m hungry” feeling — that will again require an army of delivery personnel.

Although the Super Bowl ends the football season, it is just one of several big events for the snack companies and takeout restaurants, including one coming up next week.

Turns out Valentine’s Day is one of the five biggest sales days for the aviation-themed chicken-wing chain Wingstop. As Charlie Morrison, its chief executive, said in an email, with people planning to stay in this Valentine’s Day, “Wingstop will be the romantic meal they’re looking for.”