After last season’s magical run, nearly everyone expected the Kansas City Chiefs to be back in the Super Bowl this year. An appearance by the Tampa Bay Buccaneers, coming off a 7-9 season in 2019 but given new life by a 43-year-old quarterback, came as more of a surprise.

Florida turned out to be a fountain of youth for Tom Brady, and his team’s late-season surge has continued into the postseason, setting up a clash of quarterbacks some people call the GOAT (Brady) and the Baby GOAT (Patrick Mahomes), as in “greatest of all time.”

The quarterbacks did not get to the championship game on Sunday by themselves. Both teams finished in the N.F.L.’s top 10 in most points scored and fewest points allowed, and while this game may end up having a high score, there are likely to be big defensive plays along the way.

Here is a look at how the game should play out.

When Tampa Bay Has the Ball 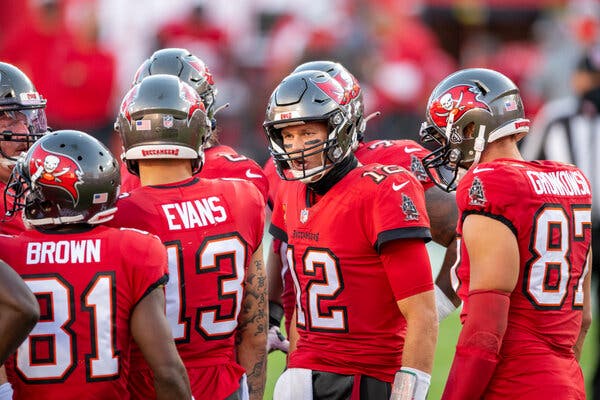 After a few years of making things work in New England with a mediocre group of wide receivers, Tom Brady is surrounded by talent at Tampa Bay.Credit…Doug Murray/Associated Press

It is not hard to figure out why Tom Brady wanted to play with the Buccaneers.

After struggling to get anything going with a mediocre group of wide receivers in his last few seasons with New England, Brady saw limitless opportunities in Mike Evans and Chris Godwin. But if he was going to roll the dice with a new team, Brady didn’t want to stop with two Pro Bowl wide receivers, so he persuaded his old pal Rob Gronkowski, a tight end, to come out of retirement as well.

When Tampa Bay’s season began with inconsistency and injuries, Brady lobbied the team to add wide receiver Antonio Brown, vouching for him as someone whose productivity would outweigh his troubles.

There were flashes of brilliance and moments of frustration for the first three-quarters of the season. But after a loss to Kansas City in Week 12, the Buccaneers came out of their Week 13 bye looking like a new team. Over the next four weeks, Tampa Bay was 4-0 and averaged 37 points a game.

That barrage has kept up in the postseason, with the Buccaneers scoring at least 30 points in each of their three road wins. They have a chance on Sunday to become the first N.F.L. team to have four 30-point games in a single postseason.

While Tampa Bay can run effectively behind Ronald Jones and Leonard Fournette, the expectation on Sunday is for Brady to move the ball downfield with short and medium throws to his four elite pass catchers, relying on them to gain yardage after the catch.

The Chiefs will counter with a pass rush spearheaded by defensive tackle Chris Jones and a secondary largely controlled by safety Tyrann Mathieu, a run stopper and takeaway machine. Bashaud Breeland, the Chiefs’ top defensive back in terms of pass coverage, will have his hands full trying to stop Evans, Godwin and Brown.

Brady is likely to put up quite a few passing yards, but Kansas City has a bend-don’t-break defense. It may not be as intimidating as some units — Tampa Bay’s included — but it has allowed the 10th fewest points in the N.F.L. this season. So while a 300-yard game from Brady may be expected, a continuation of Tampa Bay’s 30-point streak, which is at seven games over all, is less likely.

When Kansas City Has the Ball

Mahomes isn’t fair. He uses speed and footwork to avoid sacks the way Aaron Rodgers does. He turns busted plays into huge runs the way Russell Wilson does, and he can zip an accurate pass to a receiver with a flick of the wrist the way Dan Marino used to. While it all plays out like a tightrope act, with Mahomes frequently drawing defenders in close before releasing the ball, he almost never panics, showing a precision in everything he does that belies the apparent improvisation.

While it’s easy enough to explain his effectiveness by pointing to his 4,740 yards passing or his 38 touchdown passes this season, the two most significant statistics for Mahomes are probably his N.F.L.-best 1 percent interception rate and his 3.6 percent sack rate. You can let your eyes convince you that he is being reckless, but you would be emphatically wrong — as so many defenses have been.

The Chiefs’ challenge was making sure they put players around Mahomes who could capitalize on his greatness, and they have two of the best in tight end Travis Kelce and wide receiver Tyreek Hill. Kelce set a record for receiving yards by a tight end this season (1,416), and would probably have topped 1,500 had Kansas City not rested its starters in Week 17. Hill is a touchdown threat on every play, with his speed sometimes overshadowing his elusiveness, strength and ability to make difficult catches and break tackles.

Speed is everywhere on Kansas City’s offense — Mahomes, Kelce and Hill have it, too — and the rookie Clyde Edwards-Helaire added a threat to the running game that had been expected to be missing when Damien Williams opted out of the season.

Considering Kansas City’s tendency to play its best when it is challenged most, this game seems to tilt in the Chiefs’ favor, with the biggest caveat being the team’s poor health on its offensive line. Kansas City is expected to be without its two starting tackles and multiple guards, leaving it short-handed against a Tampa Bay pass rush that has an extreme interior push from defensive tackles Vita Vea and Ndamukong Suh and elite edge rushing from Shaquil Barrett and Jason Pierre-Paul.

If Kansas City’s offensive line turns into a sieve — a possibility because it is essentially playing a backup at every spot — Mahomes will face a lot of pressure and his scrambling ability will be extremely tested. That, theoretically, could lead to a mistake or two on throws downfield — though relying on Mahomes to make mistakes is typically a fool’s errand.

How It Will Play Out

Mahomes is in a place in his career where it is almost impossible to doubt him — something that should be familiar for Brady, who was once at the same peak with New England. It is easy to see the Buccaneers having a good day offensively, but even if they were to run up a significant lead, they should never feel safe, as the Chiefs have fallen behind by at least 9 points in four of their last five playoff games — including last year’s Super Bowl — and have won anyway.

Mahomes has years of accomplishments ahead of him before his career can accurately be stacked up against Brady’s, but it seems like a safe bet that he will do something on Sunday that no quarterback has done since Brady: win back-to-back Super Bowls.