Since the last Super Bowl 12 months ago, a pandemic has killed at least two million people around the world, including about 450,000 Americans. January was the deadliest month, and last week roughly one American died every 30 seconds from Covid-19.

The toll will grow through the Super Bowl on Sunday — during the big plays, among the slow-motion replays, amid the commercials, while the national anthem is sung and the halftime show is performed.

That alone makes Super Bowl LV different than the 54 that have come before it. And it presents a unique challenge for the N.F.L. and its broadcast partner this year, CBS Sports.

The practical question is no longer if they should play Super Bowl LV — it is the last of 269 N.F.L. games this season — but how to play it, and how it will be presented.

Players will certainly hit, run and tackle as usual. But will the game be packaged as the usual spectacle of violence, commercialism and bombast? Should it be?

“We’re trying to strike that right tone and be reflective on the year that has been while also providing a bit of hope for, you know, what’s on the other side,” said Peter O’Reilly, N.F.L. executive vice president of events, including the Super Bowl. “A lot goes into that.”

The league promises a blend of cold reality and championship football. There may be a softer touch and more reflection, especially during the pregame programming.

“The role of the broadcast is to certainly acknowledge the landscape around it, what’s happening around it, and then let’s get on with the game,” said Jim Bell, a former longtime executive producer at NBC for the Olympics and the Today show. “We’re hopefully all going to get a nice three-and-a-half-hour rest from Covid and politics, which I think we can all use.”

The Super Bowl is the most American of sports events, beamed around the world, a proxy for how the United States sees itself, culturally. It is perennially the most-watched television broadcast in the United States, with an audience of about 100 million in the country last year, plus an estimated global audience of at least 50 million more.

People in the United States and around the world will gauge the American state of affairs by what they see during Sunday’s broadcast.

The past year, especially, has been one of political upheaval and sharp battles over race and social justice, on top of the pandemic.

The United States has not responded well to the coronavirus outbreak since it was declared a pandemic almost 11 months ago — faltering perhaps more than any other major country with such vast resources for problem solving. It has about 5 percent of the world’s population, but nearly 20 percent of its reported Covid fatalities. Tens of thousands more are likely to die in the coming weeks, whatever the progress of the vaccine rollout.

Some may consider it reckless to play such a game during a pandemic, to hold a potential super-spreader event at a football stadium in Tampa, Fla. — even one with a limited audience, adhering to social distancing and health protocols. It may encourage gatherings around the country and, at best, serve as a frivolous example of American priorities.

Others might see the game as a source of inspiration, healing and unity.

The divide might depend on how the game is presented by the N.F.L. and CBS. Viewers will certainly judge the social distancing, the mask wearing, the images on the screen and the words of the announcers — all parsed and debated in real time, thanks to social media.

“It’s hard with social media and everybody waiting for someone to make a mistake, or be like, ‘All I wanted to do was get away from Covid for two minutes,’” Bell said, adding: “That can be a pretty nasty place to have your head space while you’re trying to produce the single-biggest event on the planet.”

Not everyone will be happy with the results. 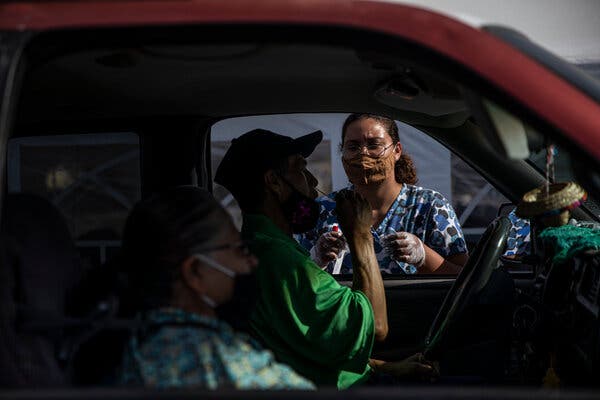 A healthcare worker assisted a patient at a coronavirus testing site in Phoenix last month. As the Super Bowl approached, Americans were dying of Covid-19 at a rate of more than one every minute.Credit…Adriana Zehbrauskas for The New York Times

“I can only really, in some ways, applaud them in the challenge that they clearly have taken on,” said Patrick Nally, a British sports-marketing executive with deep experience in the Olympics, soccer and an array of other major sports. “At the same time, I hope that they see the need to be as responsible as they must be, and present it in a manner that really reflects the tragedy that we’re all facing.”

The game represents an odd chance for an American makeover — a new year, a new administration, a new outlook. It will be a 2021 America packaged and broadcast to the world. While the N.F.L. has a chance to look really good, or really bad, in ways never imagined before, Americans may be judged right along with the league.

“In many ways, they are torch-carrying for the United States as a nation,” Nally said. “If ever there was an opportunity to present, to comment, in the right, responsible manner, this is the chance of doing it.”

In Mourning, or In Vegas?

Other sports leagues have had a chance to address the toll of the pandemic in recent months, though not with an audience this vast or a single game this orchestrated.

The issue will confront the postponed Summer Olympics in Tokyo, which were rescheduled for this July and August. Next year’s Winter Olympics in Beijing will be closely watched, to see how the Chinese spin their role in the pandemic.

The question of navigating something as frivolous-seeming as sports amid an ongoing crisis is not new, though there are no true historical parallels. Wartime might be the closest thing.

During World War II, the Olympics were called off, but the N.F.L. and Major League Baseball conducted seasons and championships despite some players’ being pulled into duty. The N.F.L. finished its regular season on Dec. 7, 1941, the day of the Pearl Harbor bombing, and held playoff games a week later, as scheduled.

There have been occasional examples of singular events that rocked the sports landscape, like terrorism at the 1972 Summer Olympics in Munich and at the 1996 Summer Olympics in Atlanta, or the deadly earthquake that interrupted the 1989 World Series. After the attacks of Sept. 11, 2001, the N.F.L. took the next weekend off and baseball paused for six days.

“After 9/11, I spent the next four days talking to everybody, including the president of the United States, about when we should come back and what’s healthy and what’s productive,” said Bud Selig, the Major League Baseball commissioner at the time. “In our own little way I do think that we helped.”

Selig acknowledged that the era and circumstances are different now. Twenty years ago, Americans generally rallied together in a show of patriotism. The country today feels far more divided, even on matters of Covid protocols.

“It is very sensitive, and you have to be extremely careful,” Selig said of the N.F.L. “But they’re smart, and they know what they have to do.”

When the New York Mets played their first home game after the attacks, Mayor Rudy Giuliani got a rousing ovation, and Liza Minnelli danced and sang “New York, New York” during the seventh-inning stretch.

“Are we in mourning, or Las Vegas?” The New York Times columnist Harvey Araton asked.

That is the type of question the N.F.L. will ask itself on Sunday, as it searches for balance in a game that usually has no such restraints on pageantry, volume or tone.

Is this year’s Super Bowl mere entertainment, a diversion from the ongoing horror? Does it reflect our losses and our past failings? Or does it signal a new tone and even recalibrate the way we move forward?

The game promises unique touches. Raymond James Stadium will have only about 25,000 spectators, roughly a third of its capacity, because of distancing mandates. That will make it the least-attended Super Bowl in history.

The N.F.L. has given 7,500 tickets to vaccinated health-care workers. All fans will be given N-95 respirator masks as they enter, the league said, and seating has been devised for distancing. Gaps between fans will be filled with cardboard cutouts of people.

Nurses at a vaccination site in Los Angeles late last month. Thousands of health-care workers received tickets to the Super Bowl in Tampa.Credit…Ryan Young for The New York Times

If there is an unusually somber mood, it will be most obvious in the pregame. A nurse, a teacher and a Marine veteran will serve as honorary captains for the coin toss, and the poet Amanda Gorman, fresh from her star turn at the presidential inauguration, will recite an original poem. (The N.F.L. said she was invited before her appearance at the inaugural.) A video featuring Vince Lombardi, the Hall of Fame coach of the Green Bay Packers in the 1960s, will lead into a performance of “America the Beautiful,” the league said.

“You’ll see that tone in the pregame and in the pieces that are in-stadium and on air,” said O’Reilly, the N.F.L. vice president overseeing the Super Bowl. “And the moments that are always big and powerful around the Super Bowl will take on just a bit more significance this year.”

Bell, the veteran producer who left NBC in 2019, said a key part of good sports broadcasts is “storytelling,” a model handed down from the likes of producers Roone Arledge and Dick Ebersol.

“You may see it sprinkled into the telecast, as it relates to the players, coaches and teams,” Bell said. “I know those guys will do a fantastic job of finding the right balance and having the right tone between covering the game and telling the stories.”

Protocols around Covid-19 have made it trickier than usual to prepare for the game broadcast, but they have created some unexpected opportunities. Camera platforms and wires were fitted into places where they could not normally have been, offering a chance for unusual angles.

N.F.L. stadiums this season have had an extra buffer between the teams on the sidelines and fans in the seats, usually several empty rows of seats covered by a tarp. For the Super Bowl, the first seven rows will be wrapped in LED screens.

The bottom rows of seats, normally covered in tarps during the Super Bowl, will bear LED screens, providing an opportunity to promote certain messages.Credit…Mike Ehrmann/Getty Images

The same is true for all those connecting themselves to the game, like television advertisers reportedly paying $5.5 million for 30 seconds of time. Some perennial participants, like Budweiser, have opted out of their usual slots, choosing social media as a more understated way to get pitches across.

The question is whether the world at game’s end is any different. Maybe it will be a source of unity, a boost for American pride. Maybe if Kansas City Coach Andy Reid wears a mask, or Jim Nantz of CBS suggests that Americans get vaccinated, it could be a teaching moment. Might the production feel too political, or too preachy, or not enough of either?

The only certainty on Sunday is that the death count from Covid-19 will rise, by the hundreds or thousands just in the United States, as millions watch a football game.

How that game is received, and how America is reflected in the moment, is up to the N.F.L.

“It puts them on a wonderful pedestal to present a very responsible and a very positive image of themselves and their organization,” said Nally, the global marketing expert. “Which under normal circumstances they would never have.”