Ingredients in many baby foods, including some organic fare, are contaminated with heavy metals like arsenic, lead and cadmium at levels that are far higher than those allowed in products like bottled water, congressional investigators said on Thursday.

Their report underscored the federal government’s persistently lax approach to overseeing the safety of baby food, some experts said, despite clear risks to infants and toddlers. Exposure to heavy metals in particular has been linked to behavioral impairments, brain damage and even death.

“This is an endemic problem that’s been swept under the rug and never addressed,” said Tracey Woodruff, director of the program on reproductive health and the environment at the University of California, San Francisco, who was not involved in the preparation of the congressional report.

“It speaks to the many areas that we need government to be active in,” she added. “Consumers can’t figure it out on their own.”

The report, by a subcommittee of the House Committee on Oversight and Reform, drew on data from four companies that responded to requests for information about testing policies and test results regarding their products.

Representative RajaKrishnamoorthi, Democrat of Illinois, who is chairman of the subcommittee, said the failure to provide the requested information “raises the concern that perhaps they have evidence of even higher metallic content in their baby foods, compared to their competitors.”

Representatives of Walmart and Campbell Soup disputed the characterization, saying the companies had responded to requests for information, although they acknowledged they did not provide testing data. Sprout did not respond to a request for comment.

The Food and Drug Administration does not set limits on heavy metals specifically for baby foods, except for arsenic in rice cereal. The agency does regulate lead in bottled water, juice and candy, and limits arsenic and cadmium in bottled water, as well.

The agency “has been AWOL” and has “completely put its head in the sand and not done anything to regulate the industry,” Mr. Krishnamoorthi said. He plans to introduce legislation to tighten regulatory oversight of baby food, he added.

An F.D.A. spokesman said that the agency had been working toward reducing toxins in foods, and that setting the limit on inorganic arsenic in infant rice cereal was the first step toward doing so, though the limit has been criticized by expert groups as too high.

The agency also has cautioned parents that rice cereal does not need to be an infant’s introduction to solid foods and that they should not rely on it excessively, and should provide a varied grain diet. 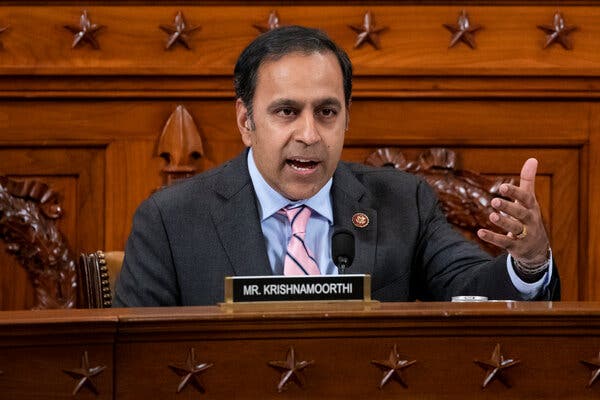 Representative Raja Krishnamoorthi, Democrat of Illinois, leads the subcommittee that issued the report.Credit…Samuel Corum for The New York Times

Companies rarely test baby food for contaminants before sending the jars to retail shelves. Two companies that did so — Nurture, which makes Happy Family Organics products, and Hain Celestial, which produces Earth’s Best Organic foods — found inorganic arsenic at levels exceeding 100 parts per billion, the limit proposed by the F.D.A. for infant rice cereal in 2016 and formally adopted last year.

Nurture appeared to disregard its own internal “goal threshold” of 100 p.p.b. for arsenic in snacks called “puffs,” which exceeded that limit.

Gemma Hart, a spokeswoman for Nurture, said that Happy Family products were safe and that the metals, which are naturally found in soil and water, were present only in “trace amounts.”

While heavy metals do occur naturally in some grains and vegetables, the amounts may be increased when food manufacturers add other ingredients to baby food, like enzymes and vitamin and mineral mixes that are heavily tainted with metals, the report said. Manufacturers rarely test ingredients for mercury.

Investigators also described what they called a “secret” industry presentation to the F.D.A. on Aug. 1, 2019. Representatives of Hain told regulators that testing only individual ingredients in baby food led to an underestimate of the content of heavy metals in the final product.

For example, inorganic arsenic ranged from 28 percent to 93 percent higher in Hain’s finished baby food than had been estimated by tests of the individual ingredients. Half of its brown rice products exceeded 100 parts per billion, according to the report.

Robin Shallow, a spokeswoman for Hain Celestial, said the company had not seen the report yet and could not comment on specifics, and added that Hain is continuously refining its internal testing procedures in collaboration with the F.D.A. “to ensure our products exceed safety and nutrition standards, including screening out harmful levels of substances that occur naturally.”

Beech-Nut, which used ingredients with high levels of arsenic to improve qualities like “crumb softness” in some products, set very liberal thresholds for arsenic and cadmium in its additives, according to the report: 3,000 p.p.b. of cadmium in additives like vitamin mix, and 5,000 p.p.b. of lead in an enzyme additive called BAN 800.

The company used cinnamon that contained 886.9 p.p.b. of lead, according to the report. The company’s standards for cadmium and lead in additive ingredients “far surpass any existing regulatory standard in existence,” the investigators said. Other added spices, like oregano and cumin, were also high in lead.

“No level of exposure to these metals has been shown to be safe in vulnerable infants,” said Linda McCauley, dean of the Nell Hodgson Woodruff School of Nursing at Emory University, who studies environmental health effects.

Exposure from several sources can lead to cumulative effects that are dangerous to infants, she added.

In a statement, Beech-Nut Nutrition did not address the specific amounts but sought to reassure parents that the company had “rigorous testing protocols and strict standards in place.”

The company takes steps to minimize the metals in its products, said Dana Stambaugh, a spokeswoman, adding: “The health and safety of babies is our highest priority.”

The report called on the F.D.A. to set standards for heavy metals in baby food that will protect infants against neurological injury, and not just reduce the risk of developing illnesses like cancer in the longer term.

The investigators said the agency should require baby food manufacturers to test finished products, not just ingredients, for heavy metals; report the test results on food labels so consumers can see them; and phase out ingredients like rice, which may be loaded with heavy metals.

In the meantime, parents can protect babies by not feeding them infant rice cereal or other products like snacks made with rice flour. Healthy-sounding snacks like Nurture Happy Baby’s apple and broccoli puffs, or its strawberry and beet puffs, contained high levels of arsenic, according to the report.

Though rice cereal is often one of a baby’s first foods, both white and brown rice contain levels of inorganic arsenic that are up to six times higher than some other cereals made from grains like barley, oatmeal, organic quinoa, wheat or buckwheat, according to the nonprofit group Healthy Babies Bright Futures.

The group issued a report in 2019 on heavy metals in baby foods. It also recommends that parents not use teething biscuits that can contain heavy metals and cause tooth decay.

Parents should not give babies juice to drink, the group says, and should provide a variety of fruits and vegetables, so as to minimize exposure to carrots and sweet potatoes, which may be high in lead and cadmium.