LONDON — The vaccine wars have come to Europe.

For months now, wealthy countries have been clearing the world’s shelves of coronavirus vaccines, leaving poorer nations with little hope of exiting the pandemic in 2021. But a fresh skirmish this week has pitted the rich against the rich — Britain versus the European Union — in the scramble for vials, opening a new and unabashedly nationalist competition that could poison relations and set back collective efforts to end the pandemic.

The European Union, stung by its slow progress on vaccinations, threatened this week to tighten rules on the shipment of Belgian-made shots to Britain.

British lawmakers, in turn, have accused their European counterparts of a blackmail campaign that could embitter relations for a generation.

And poorer countries, already at the back of the line for vaccines, could face even longer waits if the intense squabbling among rich countries drives up prices for everyone else.

The feuding in Europe holds echoes of the dark, early days of the pandemic, when scores of countries banned or restricted the export of protective equipment and medical devices. Nearly a year later, far from abating, that spirit of protectionism has been exacerbated: Not only are vaccine supplies too scarce for many poorer countries to begin inoculations, but wealthy countries cannot figure out how to share the available doses among themselves. 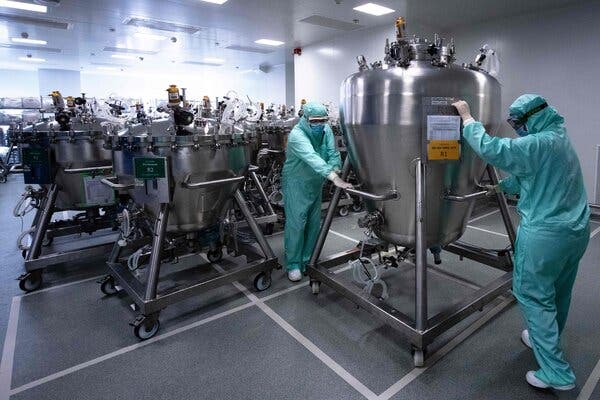 “Science is succeeding, and solidarity is failing,” said Robert Yates, the director of the global health program at Chatham House, the London-based policy institute. “The world’s political leaders are letting down the scientists, and everyone else.”

At the core of the problem are production delays at separate factories in Belgium that make the Pfizer-BioNTech vaccine and the one developed by AstraZeneca and the University of Oxford. With a new and more contagious coronavirus variant fueling a surge of cases in several European countries, those delays have undermined efforts to get shots into millions of people’s arms, ratcheting up the global competition for doses.

But the notoriously tricky manufacturing of vaccines is only part of the problem. Public health experts say the entire global system of buying doses, pitting one country against another with little regard for equity, is unfit to the task of ending a pandemic that respects no borders.

For the European Union, problems with its vaccination campaigns have reinforced criticism of the bloc’s occasionally unwieldy, slow bureaucracy. Unable to speed up vaccine makers, the bloc’s leaders have instead resorted to threats about the export process, a sign of the severe pressure facing them as the European Union falls far behind Britain and the United States, which made advanced purchases of vaccines earlier, and have been quicker to authorize the shots and get people inoculated.

Syringes of the AstraZeneca-Oxford vaccine on Tuesday in Sunderland, Britain.Credit…Ian Forsyth/Getty Images

“The prestige of the European Union is founded on a perception of competence, particularly when you go to different peripheries of the continent, where people think that Brussels is going to be more competent than the national authorities,” said Bruno Maçães, an author and a former politician in Portugal. “You can see a sense of desperation in the last couple days.”

Many European countries, rich and poor, have been hoping that the arrival of the AstraZeneca-Oxford vaccine would hasten the pace of vaccinations, owing to its lower price and simpler storage requirements, compared to those from Pfizer and Moderna. The bloc’s drug regulators are expected to authorize the vaccine on Friday, a month after Britain did.

But AstraZeneca told the European Union at a teleconference last week that it was going to slash its scheduled deliveries to 31 million doses by the end of March, less than half of the 80 million doses the bloc had been expecting.

E.U. officials were aghast. The news came on top of an announcement from Pfizer that it had to slow its own vaccine deliveries so that it could upgrade its Belgian factory.

With member states incensed, the European Commission reacted on Monday by saying that all coronavirus vaccines made within the bloc would require special paperwork to be shipped elsewhere. That put Britain’s supply of Pfizer-BioNTech vaccines at risk: Unlike its supply of the AstraZeneca vaccine, which is being produced in British plants, its shipments of the Pfizer-BioNTech vaccine come entirely from a factory in Puurs, Belgium.

The Pfizer production site in Puurs, near Antwerp, Belgium.Credit…Olivier Hoslet/EPA, via Shutterstock

European lawmakers justified the move by saying it would allow them to monitor how companies were distributing vaccines, and hold them accountable.

European officials have implied that AstraZeneca, headquartered in Britain, sent vaccines to Britain that were meant for the continent instead. They said suggestions by AstraZeneca that the company had been hit by manufacturing problems at its Belgian factory could not explain the steep drop in delivery volume.

AstraZeneca, for its part, has said that Britain’s supply of vaccines has come from the country’s own plants, and not Europe. “We have not diverted any supply from the Europe supply chain to countries outside the E.U.,” a company spokesman said on Tuesday.

Relations between Britain and the European Union were already testy after more than four years of wrangling over Brexit, which was finalized just weeks ago, and British lawmakers reacted with fury to being blamed for the bloc’s vaccine problems. David Jones, a Conservative lawmaker, told a British newspaper that “this looks awfully like blackmail,” saying it “shows why we were right to leave the E.U.”

Analysts said the spat was indicative of rising tensions over the large lead Britain has in inoculation, having given vaccines to 10 percent of its people so far, compared to about 2 percent in the European Union. Britain was the first country to authorize a fully tested coronavirus vaccine, and the government of Prime Minister Boris Johnson has trumpeted its successes.

“I think there are elements within the government, and within the pro-Brexit community, who are actually quite relishing this,” said Mr. Yates of Chatham House. “In this case, we are seeing perhaps a bit of retaliation now from our European neighbors who are fed up with this.”

The conflict between the European Union and AstraZeneca took a particularly damaging turn on Monday night when two German newspapers published claims — errantly, it turned out — that the AstraZeneca-Oxford vaccine was completely ineffective in older people.

While low numbers of older people were enrolled in AstraZeneca’s completed clinical trials, making it difficult to assess the vaccine’s efficacy in that group, the newspaper claims were false, the German health ministry later said. But they played into the anger among some Germans about the slow vaccine rollout, particularly given that Britain has been inoculating people since Dec. 8 with the vaccine that was originally developed by BioNTech, a German company.

“How Germany Became a Vaccination Snail,” read a headline in the mass-circulation Bild on Tuesday, over an article detailing the country’s missteps that have led it to fall behind in the race to vaccinate its population.

The first shipment of Pfizer-BioNTech vaccines to arrive at a central pharmacy near Paris last month before being distributed to hospitals.Credit…Stephane De Sakutin/Agence France-Presse — Getty Images

Concerns about the paucity of data in older people could further limit the use of the AstraZeneca shot: European regulators are considering authorizing it only for people under 65 years old, two E.U. officials said.

For AstraZeneca, which is being relied upon by much of the world to supply affordable and easy-to-store shots, the production delays in Europe have been a sign of snags in its ambitious plans, analysts said. While other vaccine makers, like Pfizer, are relying on only a few facilities, AstraZeneca has contracted its manufacturing to plants all over the world.

The European Commission is now demanding that AstraZeneca open up its production plans to scrutiny. In an internal document seen by The New York Times, the commission said that the European Union wants to know “which factory produced what and when,” a question that the bloc believes its contract entitles it to have answered.

Britain reached an agreement with AstraZeneca last May to buy tens of millions of doses of the vaccine, when it was still in clinical trials — three months before the European Union arranged its purchases.

Even so, the bloc made the vaccine a centerpiece of its plans, ordering 300 million doses that it planned to distribute to member states based on population size. Several member states eschewed parts of their shares of the Pfizer and Moderna vaccines, which are more expensive and harder to store and administer, to plan their strategies around AstraZeneca deliveries.

To ensure it would not be at a disadvantage to other countries in securing orders, European Union officials said that they also agreed in mid-October to pay more than 300 million euros ($360 million) so that AstraZeneca could scale up production capacity.

With deliveries now falling far short, Ursula von der Leyen, the president of the European Commission, on Tuesday demanded a return on the bloc’s investments.

“The companies must deliver,” she said. “They must honor their obligations.”

But Pascal Soriot, the chief executive of AstraZeneca, said in an interview with the Italian newspaper La Repubblica that his company had never promised to deliver the vaccine to the bloc as fast as it did to Britain.

“Europe at the time wanted to be supplied more or less at the same time as the U.K., even though the contract was signed three months later,” he said. “So we said, ‘OK, we’re going to do our best, we’re going to try, but we cannot commit contractually.’”