The new year was supposed to bring improved economic fortunes across Europe, as coronavirus vaccines made their way into the bloodstream.

Instead, the eurozone economy shrank at the end of 2020, according to official figures out Tuesday, raising fears of a double-dip recession and demonstrating that the pandemic is likely to remain a force for at least a few more months in the face of the European Union’s pronounced failure to distribute vaccines.

Economic output in the 19 countries that belong to the eurozone fell 0.7 percent in the fourth quarter compared with the previous quarter, according to a preliminary estimate by the European Union’s official statistics agency. For the full year, overall output fell 5.1 percent.

Europe is now likely to suffer continued economic contraction over the first three months of 2021 and perhaps into the early part of the next quarter, as governments are forced to maintain restrictions on commercial life, according to a report released Tuesday by Oxford Economics in London.

“There is definitely a risk that vaccine distribution continues to be disappointing,” said Tomas Dvorak, a eurozone economist with Oxford Economics. “There is risk that the second quarter will also get quite bad.”

The failure of European governments to get vaccines to their citizens could create a political backlash, fueling resentment toward Brussels and souring the already uneasy relations among the 27 countries that belong to the European Union. Competition for vaccines has already strained the bloc’s relations with Britain. 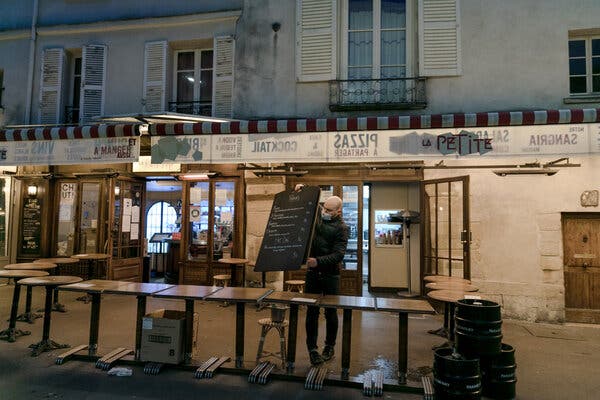 A bar in Paris. France, which remains in a tight lockdown, reported a decline in economic output in the fourth quarter of 2020.Credit…Andrea Mantovani for The New York Times

“We have to watch the potential political consequences,” Holger Schmieding, chief economist at Berenberg Bank in London, said in a note.

Previously, Oxford and other economists had forecast stagnation for the first quarter of the year, followed by a marked improvement in the spring. That view was guided by the assumption that vaccines would be distributed widely, allowing authorities to lift restrictions imposed to choke off the spread of the coronavirus. As people returned to shops, restaurants and holiday destinations, and as factories resumed production, economies would again expand.

That scenario now appears set for a delay as Europe struggles to secure and distribute vaccines. The eurozone now faces its second recession in six months after its economy shrank in the first half of 2020.

European factories have largely adapted to the pandemic and are operating almost normally, but people whose jobs depend on face-to-face contact are suffering. More than half of Germans who work in hotels or restaurants, about 600,000 people, are on government-subsidized furloughs and effectively unemployed, according to the Ifo Institute in Munich, a research organization.

Germany managed only meager growth in the fourth quarter of 2020, and the economies of Italy and France declined. All three remain in tight lockdown.

Across the 27 states of the European Union, only 2.5 percent of national populations on average have received at least one dose of vaccine, while Germany, Italy, and France are all below that dismal mark.

Alexanderplatz in Berlin Mitte. Germany managed only meager growth in the fourth quarter of 2020.Credit…Lena Mucha for The New York Times

By contrast, Britain — which aggressively purchased vaccines while relying on its national health system to distribute them — has injected at least one dose into more than 13 percent of the population. The United States has vaccinated about 7 percent of its population.

Economists assume that the European Union will succeed in substantially ramping up vaccination by spring, allowing restrictions to be gradually lifted. But the potential for further disappointment remains.

“The tough Corona restrictions have once again plunged the euro area economy into recession,” Christoph Weil, an economist at Commerzbank, said in a note to clients. He predicted that the downturn in the current quarter will be even steeper.

Europeans had hoped for stability after a roller coaster year. In the second quarter of 2020, gross domestic product fell 11.7 percent as the pandemic took hold. Then growth rebounded 12.4 percent in the following quarter, the most on record, as lockdowns eased and firms adjusted to the crisis.

Economists do not expect such severe gyrations in 2021, but few expect the eurozone to recover its previous economic strength until 2022.

Often maligned for ponderous and bureaucratic ways in the face of crisis, the European Union dickered over contract terms with pharmaceutical companies, allowing more aggressive governments in London, Washington and elsewhere to lock up supplies. Many member states then opted not to purchase their full allocations from the European bloc.

If shortages and distribution bottlenecks persist, the economic recovery could be further stymied as governments maintain restrictions even longer.

Beyond the timing of the eventual return to economic growth, the botched European vaccination drive also threatens the magnitude of the recovery.

Retail stores were busier in Lombardy last December when some restrictions were lifted.Credit…Alessandro Grassani for The New York Times

As hopes that vaccines would prove transformative give way to a more complex understanding of the continued risks of the pandemic, people may prove more cautious even after governments allow a return to shops, offices and entertainment venues. Companies that have figured out how to substitute Zoom calls for business travel may be slow in putting employees back on airplanes. If an aversion to risk persists, that could limit economic growth even after the pandemic is controlled.

Eventually, however, the vaccines will find their way into European arms and the infection rate will slump, allowing a return to places now shunned as vectors for the virus.

“I’m wary of saying we’ll get back to normal, because it’s quite hard to pin down what normal is,” Mr. Dvorak said. “But I think it’s reasonable to assume that consumers will resume their spending patterns.”