MOSCOW — A day after protests swept across Russia in support of a jailed opposition leader, the authorities said Monday that some participants face harsh punishment, including spells in the prison system once known as the gulag.

The Kremlin spokesman, Dmitri S. Peskov, told journalists on a conference call on Monday that the protests included “a large number of hooligans and provocateurs” and that “the law should be applied with the utmost severity.”

For a second consecutive weekend, tens of thousands of people turned out Sunday in cities across Russia to call for the release of Aleksei A. Navalny, the opposition leader who was jailed for 30 days last month after returning to Russia.

Mr. Navalny returned following his recovery at a German hospital after he was poisoned in August with a military-grade nerve agent, an attack that was confirmed by German, French and Swedish laboratories.

Mr. Navalny, 44, an anticorruption activist who has been active in street protests in Russia for a decade, said the Kremlin was behind the poisoning and wanted to kill him.The Russian government has denied that and has questioned whether Mr. Navalny was really poisoned.

The near-fatal dose of poison, a sophisticated nerve agent called Novichok developed by the Soviet Union, was placed in Mr. Navalny’s underwear, according to the opposition leader, citing what he said was a taped confession by a Russian agent.

Mr. Navalny returned to Russia even though the authorities threatened to arrest him on arrival. He was then detained for violating parole on a 2014 financial crime conviction that the European Court of Human Rights had ruled was politically motivated. 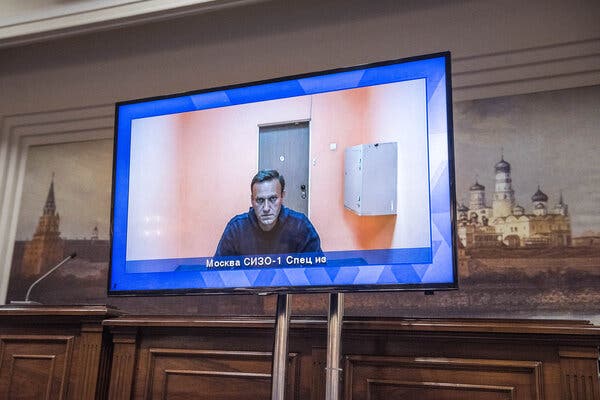 Mr. Navalny at his hearing on Jan. 28. He has been remanded to pretrial detention for 30 days.Credit…Sergey Ponomarev for The New York Times

Mr. Navalny said the financial crime was concocted by the Russian authorities and called accusations of violating parole absurd, since he could not report twice a month to a parole officer because he was evacuated from Russia to Germany while in a coma after the nerve agent attack.

He has been remanded to pretrial detention for 30 days. On Tuesday a court will consider imposing a prison sentence that could put him behind bars for several years.

The prosecutor general’s office issued a statement Monday saying that Mr. Navalny should be incarcerated for the parole violations, all but assuring that outcome as judges defy prosecutors’ requests in only a small number of instances in Russia’s criminal justice system.

Politically, imprisonment would indicate a shift in the government of President Vladimir V. Putin’s handling of Mr. Navalny. For years, he has been frequently jailed for short terms on minor charges but never imprisoned.

Imprisoning political dissidents mostly ceased in the immediate post-Soviet period but was revived, on a small and targeted scale, under Mr. Putin.

After street protests in Moscow in 2012, courts sentenced a few dozen out of the tens of thousands of protesters to long prison terms, seemingly as an example for others.

These few dozen cases were well-publicized to highlight the illegality of unsanctioned street actions, but the approach avoided angering large numbers of Moscow families in a prosecutorial onslaught, risking a spiral of repression and protest. In contrast, in neighboring Belarus, police have detained at least hundreds of antigovernment protesters since last summer for extended periods.

During Sunday’s protest, the police detained 5,300 people throughout Russia, though many were released later in the day.

A crowd of protesters in Moscow on Sunday. Thousands of protesters were arrested during demonstrations across the country.Credit…Sergey Ponomarev for The New York Times

It is unclear how wide a net the prosecutors will now cast. Several dozen cases were reported that could lead to spells in prison.

Mr. Peskov, the Kremlin spokesman, referred to people who behaved “more or less aggressively” toward police when calling for severe punishments. “There can be no conversations with hooligans and provocateurs,” he said.

Supporters of Mr. Navalny said in a statement published online Monday that they expected prosecutors to justify riot charges against protesters based on two incidents: a police car that caught fire and a man on an otherwise empty street who walked into a line of police wielding a club. The police issued a statement saying they were investigating the car fire as vandalism.

The statement noted the two episodes were highlighted on pro-government media and could become a justification for prosecuting participants in the marches on rioting charges, which carry long sentences. Short sentences in Russia are served in jails while most longer terms are served in penal colonies.