WASHINGTON — Sarah Huckabee Sanders, who served as White House press secretary under former President Donald J. Trump, announced Monday that she was running for governor in Arkansas, her home state, competing for a seat once held by her father.

“I took on the media, the radical left and their cancel culture, and I won,” Ms. Sanders, 38, said in a nearly eight-minute video, signaling that she planned to frame herself not as a policy-driven candidate but as a vessel for Republican rage, in a test of the endurance of Mr. Trump’s grievance politics.

Ms. Sanders, who was encouraged by Mr. Trump to run when she left the White House in 2019 and had long planned her announcement, is one of several former Trump officials and family members whose names have been floated for political races of their own. But as of now, she appears to be alone in hatching firm plans for a campaign after Mr. Trump’s defeat.

Ivanka Trump, the president’s elder daughter, is in the process of moving to Florida, where there had been talk of a potential primary challenge to Senator Marco Rubio, her onetime partner on a child care tax credit. While she is not ruling anything out, she is unlikely to seek office.

While her sister-in-law, Lara Trump, had been eyeing an open Senate seat in North Carolina, her home state, in 2022, it is now less clear if she will enter the race.

Vice President Mike Pence is still wondering if he can carry the Trump mantle in a Republican presidential primary in 2024, a gambit that would depend on Mr. Trump’s choosing not to run or being convicted in the coming Senate impeachment trial.

Ms. Sanders may be a unique case study. She is stepping over both the Arkansas lieutenant governor and the state attorney general, who waited their turn and supported Mr. Trump but who can’t claim as close a connection to him as Ms. Sanders can. Mr. Trump was expected to endorse her on Monday night, an adviser to the former president said. She also has powerful family connections in the deep-red state, where the only race that really matters is the Republican primary.

“The Republican base is not interested in serious governing candidates,” said Tim Miller, who served as an adviser to former Gov. Jeb Bush of Florida. “They want people who will ‘own the libs,’ and Sarah is perfect for that.”

While a grievance-first strategy may be ruinous to the party’s chances in swing states like Pennsylvania and Virginia, it resonates in a conservative state like Arkansas. “Pro-coup Trumpism is a meal ticket to success in a Republican primary,” Mr. Miller said.

Ms. Sanders has already started to build a statewide operation, and because of her father, former Gov. Mike Huckabee, she has high name recognition and a political identity in Arkansas beyond an association with Mr. Trump.

Here are other Trump officials and family members who have been seen as possible contenders for higher office, but who may face a more difficult path. 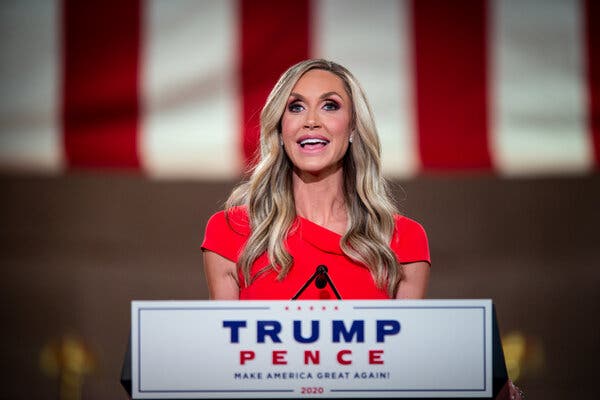 Ms. Trump, 38, the president’s daughter-in-law, who emerged during the 2020 presidential campaign as a fierce defender of Mr. Trump, has been eyeing an electoral future of her own in North Carolina, her home state. She and her husband, Eric Trump, have yet to relocate their family from New York, but in the months leading up to the presidential election, she had been actively considering a rare Senate seat that will open there in 2022, when Senator Richard Burr retires at the end of his term, people familiar with her plans said.

Ms. Trump’s combativeness was seen as potentially appealing to Republican primary voters. During the 2020 campaign, she went where Ivanka Trump would not: repeating Mr. Trump’s ad hominem attacks on Hunter Biden and casting doubt on the integrity of the election. Political strategists have compared her to Kelly Loeffler, the recently defeated Georgia senator, but say that she has more skill on the campaign trail.

The upsides of a Lara Trump candidacy were that she would immediately have more name recognition and an ability to raise cash online that would most likely dwarf that of the more experienced Republicans in the race. Her last name already prompted Mark Meadows, a former congressman from North Carolina who served as Mr. Trump’s final White House chief of staff, to say publicly that he would not run for Senate in the state, a race that his advisers had expected him to consider.

But since Mr. Trump’s defeat, it is less clear whether his daughter-in-law will enter the race, perhaps a concession to the fact that simply aligning herself with the former president to win the Republican primary would not gird her for the potential backlash in a general election in a swing state.

Ivanka Trump, the former president’s elder daughter, served as a senior aide in his White House.Credit…Pete Marovich for The New York Times

In October, when Ivanka Trump described herself as “pro-life, and unapologetically so,” her comment was seen as the surest sign to date that the ambitious, spotlight-seeking Trump daughter was serious about a career of her own in Republican politics.

Over the past four years, Ms. Trump, 39, has undergone a political transformation, from a registered New York Democrat to what she has described as a “proud Trump Republican.” During the 2020 campaign, she was considered by Trump campaign officials to be the top surrogate for her father, often speaking on his behalf to suburban women. For years, she has promoted articles and had her staff pitch stories about how she rivaled top Democratic presidential candidates in her fund-raising abilities.

She is still packing up her mansion in the Kalorama neighborhood of Washington, but will relocate in the coming weeks to Florida, where her advisers say she is weighing her options when it comes to elected office. That includes not popping a trial balloon about a potential primary challenge next year to Mr. Rubio, who Republican critics note could be vulnerable because he did not vote to sustain any objections to the state’s electors.

Other observers have dismissed that scenario as a difficult way to begin a political career and said Mr. Rubio needed to take it less seriously after the Capitol riot on Jan. 6. Running for state office is off the table for Ms. Trump because Florida law requires seven years of residency. Some people who know her say that her ambitions are higher, that she likes the ring of “first female president” and that there’s simply no downside to keeping her name afloat.

She has surprising allies promoting it for her. “Ivanka would be a terrific candidate, with her presence, grace and beauty,” said Stephen K. Bannon, the former chief White House strategist who received a pardon from Mr. Trump. Once an enemy of Ms. Trump’s in the White House, he is now intent on propping her up. “She’s also the most populist because she’s fully focused on working families,” he said.

“From Huckabee to Lara Trump to Don Jr. to Kayleigh McEnany, this is the new vanguard of the MAGA movement,” Mr. Bannon added. “I anticipate these people will be either running in 2022 or 2024.”

Ms. McEnany, for her part, has already relocated to her home state, Florida, and there was briefly some talk of her mounting her own bid for the Senate, a person familiar with those conversations said. But it’s not clear how serious it was.

Over the past four years, Donald Trump Jr., 43, the president’s eldest son, has carved out a political lane for himself as a top surrogate and fund-raiser who can channel the emotional center of the MAGA movement. With 11 million followers on his various social media streams, he has been seen as a key player in the Republican messaging ecosystem, someone with a strong connection to his father’s supporters and to conservative voters who are passionate about the Second Amendment.

His advisers insist that he’s not interested in being a candidate anytime in the near future — partly because there is not a clear office for him to run for right now. That hasn’t stopped strategists from floating his name as a potential candidate in states including Montana and Florida. For now, the advisers said, he wants to stay engaged and relevant politically, along with his girlfriend, Kimberly Guilfoyle, helping to elect conservatives he likes and to take down the ones he doesn’t.

On Monday he tweeted an article from The Federalist, a right-wing publication, that called for Representative Liz Cheney of Wyoming to “Step Away From Leadership For GOP Voters.” He also vowed to help Ms. Sanders win her race.

Before serving as Mr. Trump’s chief of staff, Mark Meadows was a congressman from North Carolina.Credit…Stefani Reynolds for The New York Times

Mr. Meadows, 61, has told people he has ruled out running for office again. But his friends and his own wife don’t believe him, or don’t want to. Others say they haven’t been able to get a straight answer out of him about his future plans. During his tenure in the White House, Mr. Meadows, the former chairman of the House Freedom Caucus, competed with Vice President Mike Pence to be seen as the heir to the president’s agenda and as Mr. Trump’s right hand. He even slept at Walter Reed National Military Medical Center when the president was being treated there for the coronavirus.

Mr. Meadows still lives in Washington and has no immediate plans to move back to North Carolina, his home state. His wife has speculated that he should run for president in 2024, according to people familiar with those conversations. But his friends have not ruled out a future run for Senate or governor in North Carolina, and Ms. Trump’s fading interest in the North Carolina Senate race could give him back an opening.