Dominion Voting Systems filed a defamation lawsuit on Monday against Rudolph W. Giuliani, thelawyer for Donald J. Trump and former mayor of New York City who played a key role in the former president’s monthslong effort to subvert the 2020 election.

The 107-page lawsuit, filed in the Federal District Court in Washington, accuses Mr. Giuliani of carrying out “a viral disinformation campaign about Dominion” made up of “demonstrably false” allegations, in part to enrich himself through legal fees and his podcast.

The suit seeks damages of more than $1.3 billion and is based on more than 50 statements Mr. Giuliani made at legislative hearings, on Twitter, on his podcast and in the conservative news media, where he spun a fictitious narrative of a plot by one of the biggest voting machine manufacturers in the country to flip votes to President Biden.

Mr. Giuliani, one of Mr. Trump’s closest advisers and confidants, has faced continuing fallout for his highly visible efforts to reverse the election outcome. This month, the chairman of the New York State Senate’s judiciary committee formally requested that the state court system strip Mr. Giuliani of his law license.

Mr. Giuliani did not immediately respond to a request for comment.

Taken together with a lawsuit the company filed this month against Sidney Powell, another lawyer who was allied with Mr. Trump, the suit represents a point-by-point rebuke of one of the more outlandish conspiracy theories surrounding last year’s election. The president’s allies had contended that the voting machine company — which was also used in states during Mr. Trump’s victory in the 2016 election, has been tested by government agencies, and was used in states Mr. Trump carried in 2020 — was somehow involved in a rigged election, partly as a result of ties to a long-deceased Venezuelan dictator.

“Dominion was not founded in Venezuela to fix elections for Hugo Chávez,” the suit says. “It was founded in 2002 in John Poulos’s basement in Toronto to help blind people vote on paper ballots.” The suit later adds that the headquarters for the company’s United States subsidiary is in Denver.

Laying out a timeline of Mr. Giuliani’s comments about Dominion on Twitter, his podcast and Fox News, the company notes that Mr. Giuliani avoided mentioning Dominion in court, where he could have faced legal ramifications for falsehoods. “Notably, not a single one of the three complaints signed and filed by Giuliani and other attorneys for the Trump Campaign in the Pennsylvania action contained any allegations about Dominion,” the lawsuit says.

The lawsuit also links Mr. Giuliani’s false statements about Dominion to the riot at the Capitol on Jan. 6, noting that he mentioned the company in his speech at a rally for Mr. Trump before the attack, as well as numerous times on social media as the Capitol was breached.

“Having been deceived by Giuliani and his allies into thinking that they were not criminals — but patriots ‘Defend[ing] the Republic’ from Dominion and its co-conspirators — they then bragged about their involvement in the crime on social media,” the suit states.

Thomas A. Clare, a lawyer representing Dominion, said that the riot had not factored into the decision to sue Mr. Giuliani, but that it did show just how seriously Mr. Trump’s followers had taken the falsehoods told about the election. 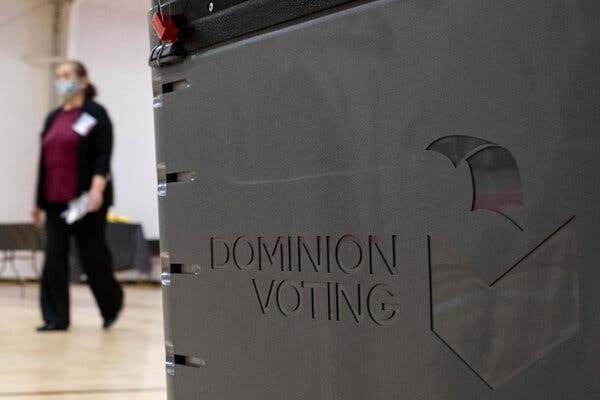 A Dominion Voting Systems ballot scanner was used at a polling location in Gwinnett County, Ga. The company is one of the largest voting machine manufacturers in the country. Credit…Ben Gray/Associated Press

“From a defamation law perspective, it just demonstrates the depth to which these statements sink in to people,” Mr. Clare said in an interview. “That people don’t just read them and tune them out. It goes to the core of their belief system, which puts them in a position to take action in the real world.”

John Poulos, the chief executive officer of Dominion, said that his company took legal action against Mr. Giuliani both to correct the record about Dominion and restore trust in the American electoral systems.

“Not only have these lies damaged the good name of my company,” Mr. Poulos said of Mr. Giuliani’s false claims, “but they also undermined trust in American democratic institutions, drowning out the remarkable work of elections officials and workers, who ensured a transparent and secure election. The thousands of hand recounts and audits that proved machines counted accurately continue to be overshadowed by disinformation.”

Dominion is a major manufacturer of voting machine equipment in the United States, second only to Election Systems & Software. Different models of Dominion machines were used in more than two dozen states — red, blue and battleground — during the 2020 election.

The company had previously warned Mr. Giuliani, sending a letter in late December that told him to preserve all records of his claims and stop making false statements, and warned that legal action was imminent. But Mr. Giuliani continued with his false claims of fraud, even arguing on Twitter days after receiving the letter that “phony Dominion voting machines” needed to be investigated.

As recently as last week, Mr. Giuliani was on his New York City-based radio show saying that “so long as you have Dominion, there is clear and present danger” that election results could be rigged. He added that he had “boxes of evidence to support his claims.”

Dominion has indicated that it plans to file more lawsuits. The suit against Mr. Giuliani says he acted with other prominent conservatives and news networks, including Mike Lindell, Lou Dobbs, Fox News, Fox Business, Newsmax and One America News Network.

“We’re not ruling anybody out,” he said. “Obviously, this lawsuit against the president’s lawyer moves one step closer to the former president and understanding what his role was and wasn’t.”

The threats from Dominion have prompted some conciliatory responses from conservative news outlets hoping to avoid a legal battle. This month, the American Thinker, a conservative website, posted an apologetic note saying that its reports about Dominion “are completely false and have no basis in fact” and that “it was wrong for us to publish these false statements.”

Mr. Giuliani was one of the main public faces of the effort to reverse the election results, with Mr. Trump rarely appearing in public and preferring to send out broadsides on Twitter against the democratic process.

Dominion argues that Mr. Giuliani profited significantly from his false claims, noting that he “reportedly demanded $20,000 per day” for his legal services to Mr. Trump and “cashed in by hosting a podcast where he exploited election falsehoods to market gold coins, supplements, cigars and protection from ‘cyberthieves.’”

The lawsuit notes just how quickly and widely the lies and false narratives had spread leading up to the riot at the Capitol. “Over a three-hour period on December 21, 2020, the terms ‘dominion’ and ‘fraud’ were tweeted out together by more than 2,200 users with over 8.75 million total followers,” the suit says.

The reach of the disinformation about the company brought countless threats of violence against employees, the suit claims. One employee received text messages stating: “We are already watching you. Come clean and you will live.” A voice mail message to customer support said, “We’re bringing back the firing squad.”

Because of these threats, Dominion has spent $565,000 on personal security, according to the lawsuit. The company claimed to have incurred $1.17 million in total expenses relating to the disinformation campaign after the election.

“Giuliani’s statements,” the suit states, “were calculated to — and did in fact — provoke outrage and cause Dominion enormous harm.”