When Brendan Hunt was arrested and charged with demanding the “public execution” of Democratic leaders this month, students of American conspiracy theory could hardly be surprised.

Two decades ago, Mr. Hunt, a 37-year-old sometime Shakespearean actor, had spread misinformation around the Sept. 11 terrorist attacks. A decade later, he falsely implicated the federal government in a cover-up of the 2012 massacre at Sandy Hook Elementary School, which killed 20 first graders and six educators. He sowed conspiracy theories around the 2013 Boston Marathon bombing, and disseminated anti-Semitic tropes on social media. Finally he reached the false notion that the 2020 election was stolen from Donald J. Trump by a vast conspiracy of power brokers in both political parties.

For many of the Capitol rioters and others who believe Mr. Trump won, it was not a large leap to “Stop the Steal” from a pathway of conspiratorial steppingstones that included the “Pizzagate” claim of 2016 that Democrats were running a child sex ring in the back of a popular Washington pizza parlor, the debunked allegation that a low-level Democratic National Committee aide was murdered for leaking Hillary Clinton’s emails and many more.

“If you look at these Sandy Hook folks, it’s not like they slipped on a banana peel and believe in Sandy Hook conspiracy theories. This is an expression of a whole worldview, or an expression of personality traits,” Joe Uscinski, an assistant professor at the University of Miami and an author of the book “American Conspiracy Theories,” said in an interview. “You’re not going to change someone’s mind. And even if you did, it wouldn’t matter because you’re going to end up in a game of Whac-a-Mole.”

Mr. Hunt visited Newtown, Conn., after the 2012 mass shooting, filming the fenced perimeter and the woods around the abandoned elementary school and going to the home of a man who had sheltered six children who ran from the gunman.

Mr. Hunt worked as an assistant analyst in the New York Office of Court Administration’s attorney registration unit. He is the son of a retired family court judge. In December and January, he allegedly posted videos calling for violence in Washington.

Brendan Hunt in a picture from his account on the video-hosting site BitChute.

According to a Jan. 18 complaint filed in the Eastern District of New York, two days after the Capitol riot Mr. Hunt, who was not in Washington that day, posted a video to a video-sharing site urging violence during President Biden’s inauguration.

“We were aware of Brendan Hunt back in 2013 when he was attacking Sandy Hook families,” said Lenny Pozner, whose son was killed at the school, and who founded the HONR Network, an organization of volunteers who seek the removal of harmful online content. “I’m not surprised that he became more radical.”

“Once people buy into the concept that the government is an evil organization trying at every turn to harm them, it is easy for people to essentially radicalize themselves and find others who agree,” he added.

Mr. Hunt has been assigned a public defender, who declined to comment on Tuesday.

Sandy Hook was the first American mass shooting to ignite viral, fantastical claims that it was a phony event staged by the Obama administration as a pretext for confiscating Americans’ firearms. Since then virtually every high-profile mass shooting has generated similar theories.

Ms. Greene, elected to Congress in November, has for years circulated bogus theories, including around mass shootings. On Tuesday, CNN reported that in 2018 and 2019, Ms. Greene indicated support on her Facebook page for commenters recommending violence against Democratic leaders. In January 2019, CNN reported, Ms. Greene “liked a comment that said ‘a bullet to the head would be quicker’ to remove House Speaker Nancy Pelosi.” In response, Ms. Greene posted a statement on Twitter attributing the inflammatory content to “teams of people” who “manage my pages.”

During her 2020 campaign, Politico mined her social media accounts, finding Islamophobic conspiracy theories and the false claim that George Soros, a wealthy Democratic donor, is a Nazi. After calling the 2020 presidential vote a “fraudulent, stolen election,” Ms. Greene voted on Jan. 6 with 146 other Republicans against certifying the Electoral College count that officially declared Mr. Biden the winner. The day before the Capitol riot, she referred to the Stop the Steal protests as “our 1776 moment.”

In 2018 she wrote on Facebook, “The people in power stop the truth and control and stall investigations, then provide cover for the real enemies of our nation.”

When a follower from Jamestown, N.Y., posted false claims about the 2018 shooting at Marjory Stoneman Douglas High School in Parkland, Fla., and said Sandy Hook was “staged,” Ms. Greene responded, “This is all true.” The post was surfaced last week by Media Matters for America, a liberal group that monitors conservative news and media posts.

Ms. Greene’s spokesman, Nick Dyer, did not address her false election claims. He referred to her statement on Twitter last week acknowledging the Parkland shooting and blaming “‘gun-free’ school zones” for the massacre. 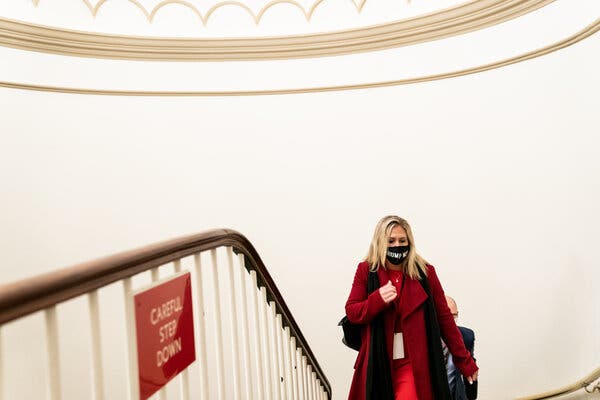 Representative Marjorie Taylor Greene, elected to Congress in November, has for years circulated bogus theories, including around mass shootings.Credit…Anna Moneymaker for The New York Times

“Politicians and Hollywood celebrities are the first to protect themselves with armed security, as you can clearly see by the military fortress around the Capitol,” Ms. Greene wrote.

Mr. Jones, another purveyor of election disinformation, spread false Sandy Hook conspiracy claims to millions through his Infowars radio and online show. He has falsely labeled most mass shootings “false flags,” and baselessly claims that the Sept. 11 attacks and the 1995 bombing of the Alfred P. Murrah Federal Building in Oklahoma City were government inside jobs.

Those suits did not stop Infowars from staging a rally in Washington the night before the Capitol riot. Then on Jan. 6, Mr. Jones broadcast live near the Capitol while an Infowars cameraman filmed the rioters from inside the building, even capturing the moment when one of them, Ashli Babbitt, was shot dead by a Capitol Police officer.

“Our own cameraman followed the crowds into the Senate, and I watched them execute an unarmed woman,” Mr. Jones said.

Mr. Jones brought Ali Alexander, a Stop the Steal organizer and a leading election conspiracy promoter, onto his show.

Mr. Jones’s ex-wife, Kelly Morales, said she sent video of Mr. Jones’s broadcasts during the riot, most of which she said had since been removed from his website, to the F.B.I. She has been posting excerpts on her Twitter account, @realkellyjones.

“Just like Sandy Hook and Pizzagate, Alex knows his actions culminate in violence and harassment,” Ms. Morales said in an interview. She and Mr. Jones are engaged in a bitter court battle stemming from their 2015 divorce.

After the Sandy Hook shooting, Mr. Jones repeatedly invited Stewart Rhodes, a founder of the far-right militia Oath Keepers, onto Infowars to discuss the massacre, which they viewed as a threat to the Second Amendment.

During one appearance, Mr. Jones suggested that “the solution is to get involved in Oath Keepers.”

Now federal law enforcement is investigating the group as central to the Capitol attack. Mr. Rhodes had appeared on Infowars just before the November election, vowing that his members would “stand up and protect people on Election Day” against Democrats who he claimed would be “stealing the election.”

At least a half-dozen people arrested after the Capitol riot have been linked to the Oath Keepers. Those arrested include three people charged with conspiracy to commit federal crimes, after recordings emerged that suggest members of the group planned and coordinated their role in the Capitol attack.

Infowars and Mr. Jones did not immediately respond to emails and text messages requesting comment.

Mr. Tracy, a former journalism professor at Florida Atlantic University, also questioned Sandy Hook, leading to his firing in 2015. He did not protest in Washington on Jan. 6, but he has latched onto 2020 election falsehoods.

“The fake news media that have been complicit in U.S. ‘regime change’ over the past four years are now acting as the ideological agency to enforce the unfounded legitimacy of the 2020 presidential election,” he wrote on his blog.

In an interview, Mr. Tracy said he also thought the Democratic nomination was stolen from Bernie Sanders in 2016 and insisted that “the truth movement” is “becoming much more mainstream.” On his blog, Mr. Tracy posts wild theories about the health risks of 5G networks, communist revolution in America and the Covid Tracking Project.

Mr. Tracy contributed to the book “Nobody Died at Sandy Hook,” coedited by Mr. Fetzer, the retired University of Minnesota Duluth professor. Mr. Fetzer moved from Sandy Hook in 2012 to the Boston Marathon bombing a year later, helping to write another book titled “And Nobody Died in Boston, Either.” Mr. Fetzer helped found an outfit called Moon Rock Books, which published false conspiracy theories related to Sept. 11, the John F. Kennedy assassination — longtime obsessions of Mr. Fetzer’s — as well as mass shootings in Parkland, Las Vegas and Orlando, Fla.

In late 2019, Mr. Pozner won a $450,000 defamation judgment against Mr. Fetzer. But he has continued to pursue other conspiracy theories, including around the 2020 election.

“There actually is a deep state, and they really do not honor the election results nor the will of the people,” Mr. Fetzer wrote on his blog last week. He also posted his approval of Ms. Greene’s Parkland conspiracy theories, saying, “No member of Congress has been willing to speak the truth about it.”