One year ago, Tom Brady’s last pass as a New England Patriot was intercepted and returned for a touchdown, the final mortifying act of a bitter first-round playoff loss.

Brady, 42 at the time, had endured an erratic season, his 20th in the N.F.L., and with that performance slump came incessant conjecture about whether he would, or should, retire.

Less than a minute into a news conference after the Patriots postseason exit, Brady, a six-time Super Bowl champion, was asked if he was going to quit football.

Brady paused, with a faint look of exasperation.

“I would say it’s pretty unlikely,” he finally said.

Now, he is a game away from another Super Bowl appearance. He will lead his new team, the Tampa Bay Buccaneers, into the N.F.C. championship against the Green Bay Packers on Sunday.

For Brady, win or lose, his 14th appearance in a conference title game will serve as the most defiant answer to those who wondered if — or secretly hoped — he would walk away from pro football forever, leaving a substantial void in the game itself.

The N.F.L. finds itself at an inflection point with aging stars at quarterback like Brady, Aaron Rodgers and Drew Brees in their final years as emerging young stars like Patrick Mahomes, Josh Allen and Lamar Jackson put their stamp on the position with multifaceted talents.

But Brady is perhaps the most polarizing of the elders because of his longstanding ties to the Patriots who have been heavily fined and punished with lost draft picks for various violations of league rules for nearly 15 years. Then there was Brady’s showcased role in the contretemps known as Deflategate, when the search for the cause of underinflated footballs in a 2015 playoff game resulted in a four-game suspension for Brady.

For now, Brady is not going away. Often called the greatest quarterback in history and a fixture of the N.F.L. playoffs this century in a Patriots uniform, he will appear on televisions screens Sunday in the pewter and red colors of the Buccaneers. Fans may have to adjust to that scene for a while, because Brady has for years indicated that he plans to play until he is 45. And who is going to stop him?

“I’m definitely older,” Brady said this month after helping Tampa Bay win its first playoff game in 18 years. “But I’m hanging in there.”

Brady, who won 30 postseason games with the Patriots, is also clearly relishing a period of vindication since the second chapter of his career would seem to prove that past successes were not solely the result of his partnership with New England’s coach, Bill Belichick, or the influence of the noted “Patriot Way.”

After the Buccaneers’ divisional round playoff victory over the New Orleans Saints last weekend, Tampa Bay Coach Bruce Arians was asked if he could tell that Brady was savoring a different kind of career milestone — a momentous playoff victory detached from the Patriots.

“Yeah, you could tell,” Arians responded with a smile. “The emotions were really good — good moments on the field, in the locker room.”

Matt Cassel, Brady’s backup in New England for four seasons who still speaks with his former teammate regularly, said Brady “is having a blast.”

“For anybody that had their doubts whether Tom was a product of the Patriots system,” Cassel continued, “they now understand the importance of Tom Brady to that organization. He doesn’t need to prove anything to anybody, but it validates that he’s just an incredible, special player.”

This season, despite some rocky moments, Brady finished second in the league in touchdowns passes (40) and third in passing yards (4,633). After two playoff victories on the road, Tampa Bay has 13 wins over 18 games this season. Conspicuously, the Patriots were a losing team this season, something that never happened during Brady’s time as a starter for the team.

Brady’s exit from the Patriots was a yearslong saga rooted in the Patriots’ unwillingness to give him a lengthy new contract that would have kept him in New England until his mid-40s. Belichick, without relevant precedent, was uncomfortable hitching the franchise to an expensive quarterback who would be that old. Instead, Brady received a series of one-year deals, the last of which expired in March when he became a free agent.

By then, Brady was intrigued by the arsenals of offensive talent that other teams had assembled — the Patriots’ cache was meager — and in a move that broke the hearts of Brady-jersey-wearing fans across six New England states, he happily signed the two-year, $50 million contract offered by the Buccaneers. 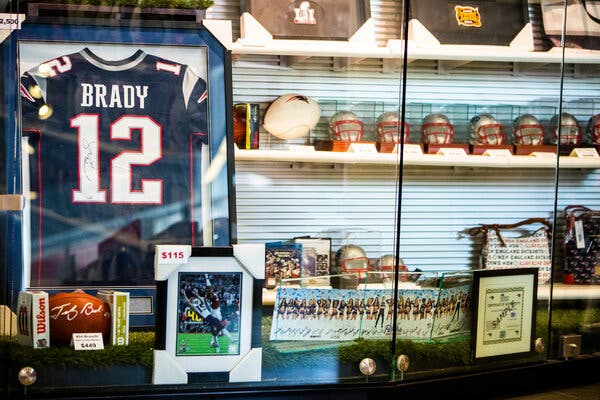 Brady is making a deep run in the playoffs. The Patriots on the other hand … Credit…Adam Glanzman for The New York Times

Brady’s relocation to Tampa was not initially smooth.

Looking for an outdoor space to work out during the coronavirus pandemic this spring, he found refuge in a city park. But concerns about the virus had closed the parks periodically patrolled by city employees. The first public appearance by Brady in his new home was a formal ejection from a recreation area that the city’s major announced on Facebook. Brady retreated to the 22,000-square foot home he and his family, including his wife, the supermodel Gisele Bündchen, have rented from former Yankees shortstop Derek Jeter.

Undeterred, Brady organized quasi-clandestine workouts at a Tampa prep school with a handful of his receiving targets. But a truncated, irregular summer training camp stunted Brady’s acclimation with teammates, and the Buccaneers appeared out of sync for the first three quarters of the season, when they compiled a mediocre 7-5 record.

Fortuitously for the team, its bye week in the schedule ensued and in the two-week period without a game, Arians and Brady revised the offense to make it more suited to the style of play Brady developed in New England, with more short, timing passes and fewer deep, risky throws.

One of Brady’s habits throughout a season is to create a vast notebook of slightly modified pass-play combinations and intricate options to help teammates prepare for games. He has done the same in Tampa.

“You’d think we’re building rockets with the amount of information that’s in a notebook for a bunch of football players,” Brady said. “But all those plays and all the schemes add up over the course of the year.”

Coming out of the bye, the Buccaneers offense became a powerhouse, averaging 37 points in four consecutive regular season victories. Brady threw for 12 touchdowns with only one interception in that span.

Brady has looked spry, even rejuvenated, while this week some of his quarterback contemporaries called it quits or were contemplating it. Philip Rivers, 39, retired after 17 seasons, the last with the Indianapolis Colts, the rest with the Chargers. Brees of the Saints, who holds the N.F.L. record for most passing yards, has hinted at retiring soon, at age 42. Brady’s Super Bowl nemesis, the former Giant Eli Manning, ended his career after last season. Pittsburgh’s Ben Roethlisberger, who will be 39 in March, may be a Steelers salary-cap casualty by his birthday.

Brady is not going anywhere, except maybe to the Super Bowl on Feb. 7, where he would become the first quarterback to play the game in his home stadium.

In the spring of 2005, when Cassel was a rookie and Brady was already a three-time Super Bowl champion, Cassel asked how long Brady expected to play in the N.F.L. The reply was immediate: Until he was 45.

“I laughed at him,” Cassel said. “But now I know he wasn’t kidding.”