MELBOURNE, Australia — It was late December, and Craig Tiley was feeling good. After months of negotiations with government officials and the world’s top tennis players, Tiley, the head of Tennis Australia, finally had the green light to stage the Australian Open in the middle of the pandemic.

Health officials and government leaders had come around to the idea of more than a thousand people arriving from overseas, including hundreds of players who would enjoy privileges during their 14-day quarantine period that Australian citizens could not. And the players had agreed to spend virtually their entire day in their hotel rooms for two weeks and to limit their on-court practice time to just two hours each day.

“The players are being great,” Tiley said then of the deal for a limited quarantine period. “They realized if they didn’t want to do it, there would be no Australian Open, no lead-in events and no chance at $83 million in prize money.”

A month later, Tiley, a native of South Africa and a former college coach in the United States, is at the center of mounting anger from every side after six people on three chartered flights tested positive for the coronavirus upon their arrival in Melbourne.

The positive tests have rankled citizens, some of whom complained that Tennis Australia was putting residents at risk to placate millionaire tennis players. The chief health officer for the state of Victoria took action, ordering everyone on the chartered planes, including 72 players who were supposed to be able to practice and spend time in the gym at the tennis center, to stay in their hotel rooms for 14 days, even though none of the players had tested positive.

Then came a report that the top-ranked men’s player, Novak Djokovic, the leader of a nascent players’ association, issued a series of demands, including reducing the isolation period for players who continued to test negative and moving as many players as possible to private homes with a tennis court to facilitate training. Health officials quickly rejected them.

“We’ve been knocked around because of the flights and the challenges,” Tiley said Monday afternoon during a teleconference with some of the people in quarantine. “I have not had any place I can hide.”

In a matter of days, Tiley has gone from one of the most visible cheerleaders for Australian sports to its leading punching bag, while his organization’s signature tournament has transformed from a potential celebration in the rare corner of the world where the virus has been kept under control to yet another symbol of virus uncertainty. 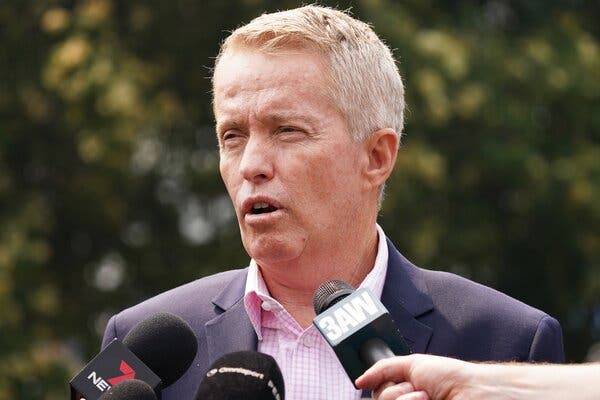 Craig Tiley, the tournament director, has defended the quarantines that are rankling the players. Credit…Michael Dodge/EPA, via Shutterstock

In the past 48 hours, government officials, including members of parliament and the agriculture minister, David Littleproud, went on television and attacked the decision to prioritize tennis over what they believed were more essential needs, such as bringing in seasonal workers, easing state border restrictions or allowing some 40,000 Australians to return from overseas. They cannot, in part, because of strict limits on daily international arrivals.

The limits remain even though Australia long ago ended one of the world’s strictest virus-related lockdowns. In Melbourne, the police enforced a nearly four-month assault on the virus. During that time, schools and businesses were closed and residents were allowed outside for just one hour (and later two) each day, either to exercise or to go to the grocery store or the pharmacy. They also had to remain within three miles of home unless they had a permit.

The strict approach has worked. Australia has one of the lowest per capita rates of infection among large countries.

When the lockdown was lifted, Tiley spent months battling to gain special privileges for tennis players he said were essential to salvage the tournament. He pushed to hold the championship as close as possible to its traditional mid-January start, rather than moving it to another country or delaying it until December, when vaccines should be more widely available.

He pledged to spend millions to charter planes and cover the costs of a limited quarantine of arriving players, plus a full quarantine for most of the rest of the more than 1,200 people coming for the Australian Open, which is set to begin Feb. 8, and three tuneup events.

In an interview in late December, Tiley said there was no guarantee that life would be any more normal by December 2021. “Is it risky now? Yes, but it could be just as risky in December,” he said.

The immediate risks became evident shortly after players began arriving late last week. First, there was word on Saturday that a flight attendant and another passenger had tested positive on a flight from Los Angeles (a third person later tested positive). Then Tiley announced that a passenger on a plane from Abu Dhabi — Sylvain Bruneau, the coach of Bianca Andreescu, a 2019 United States Open champion, acknowledged he was the one — had tested positive. On Sunday, it was someone, again not a player, on the plane from Doha, and another from the Abu Dhabi flight.

More than 70 players who opted to come to Australia assuming they would be able to train as long as they tested negative were ordered to remain inside their hotel rooms for two weeks. Many took to social media to complain. Some asked to leave the country immediately and were told they could not.

Novak Djokovic has been upset at the lack of access to courts to practice.Credit…Brenton Edwards/Agence France-Presse — Getty Images

Daniel Andrews, the premier of Victoria, rejected such moves. “People are free to provide lists of demands, but the answer is no,” Andrews told reporters. “There’s no special treatment here.”

Tiley denied complaints from players that Tennis Australia had not warned them of the potential for a strict quarantine without access to tennis courts.

He said there were weekly phone calls for four months with members of the player councils for the men’s and women’s professional tours during which he made it clear that Australia had a mandatory 14-day quarantine requirement for anyone who had close contact with someone who had tested positive.

“I reminded them that was always going to be a risk,” Tiley said during a Monday teleconference. “Even now,” he said, “if there is a major outbreak, the health commissioner for Victoria could next week rule that no players can practice during quarantine.”

Monday brought further complications as officials unexpectedly canceled all training at Melbourne Park until 3:30 p.m. because they could not safely coordinate the arrival of so many people until later in the day.

Daria Abramowicz, the sports psychologist for the 2020 French Open women’s singles champion, Iga Swiatek, who missed her Monday practice session, said on Monday that all the uncertainty was testing the nerves of players.

“Information gives a sense of security and stability,” she said. “Everyone needs the tools of adjustment right now.”

Tiley pledged to do whatever he could to make players more comfortable, with additional food and exercise equipment. He said officials were examining the competition schedule set to start on Jan. 31 to find any adjustments that could be made to help players unable to practice for two weeks, other than hitting balls against the walls of their hotel rooms.