Growing up in Moscow, Sergei Lebedev honed his English, reluctantly at first and then greedily, by reading his way through his family’s library of detective fiction.

His parents, geologists who often used English in their work, particularly encouraged him to read the work of the spy novelist John le Carré. Lebedev grew to appreciate le Carré, the author of such books as “Tinker, Tailor, Soldier, Spy” and “The Russia House,” for, he said, “defining what the Cold War looked like for ordinary readers.”

Lebedev, now 39, decided to send le Carré a copy of his latest novel, “Untraceable,” after it was translated into English. But according to Lebedev, the writer died before he had a chance to read it.

“I think he would have liked it,” Lebedev said during a video interview from his home in Berlin earlier this month. “Untraceable,” his first spy thriller after four novels that were more autobiographical in nature, shares some of le Carré’s fascination with secret worlds and the nature of evil.

The similarities did not go unnoticed in Russia when the publisher Corpus released the book, titled “Debutant,” two months ago. According to a critic at the arts magazine Moskvich, Lebedev “unexpectedly appears in the role of a Russian John le Carré … writing without regard for personal or political boundaries.”

In the United States, New Vessel Press will publish “Untraceable,” translated by Antonina W. Bouis, on Feb. 2. It tells the tale of an aging scientist, Kaletin, who defects to the West after the fall of the Soviet Union. He discovers that the lethal, undetectable poison he was once responsible for developing is being used by the Russian secret services to eliminate their political opponents — potentially including him. 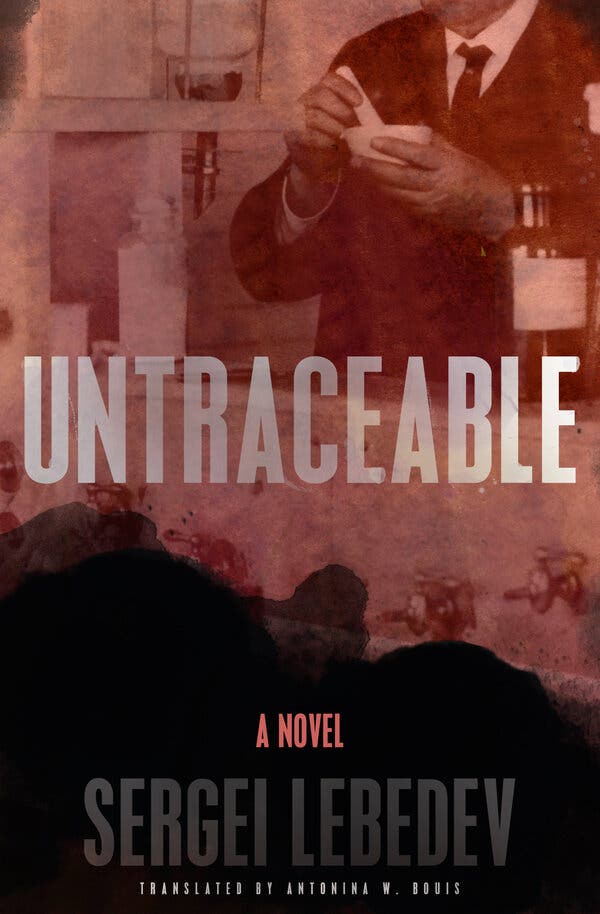 “Untraceable” is out in the United States in February.

Lebedev began writing “Untraceable” after the 2018 poisoning of Sergei V. Skripal, a former Russian spy, and his daughter Yulia, in Salisbury, England. What most intrigued Lebedev were reports that the nerve agent used to attack the Skripals was originally developed in Shikhany, a small town on the Volga River about 600 miles south of Moscow.

“I thought, ‘Wow, this story has a very long shadow in the past,’” Lebedev said. “It goes back to the very origin of chemical warfare and its consequences.”

He knew this from the research he had done on his previous novel, “The Goose Fritz,” which explored military cooperation between the Soviet Union and Germany in the late 1920s and early ’30s. With “Untraceable,” he sought to bring the story to the present day.

“Not so many novels are written in terms of what is happening in Russia now,” Lebedev said. “They write a lot about the Stalinist past and about some other historical periods, but the tragedies and the problems of the current moment are somehow ignored or avoided. I wanted to write a genre novel for the broader audience.”

But as has tended to happen over the past few frenetic years, more news — in this instance, the poisoning, recovery and subsequent arrest of the Russian opposition leader Alexei Navalny — overtook the timely angle of his novel. “My novel was written just a year before it happened, and now it’s being consumed by this real-time case,” Lebedev said.

After the attack in August, Navalny was airlifted to Berlin for emergency medical treatment. Lebedev moved to the German city from Moscow two years ago with his wife, who was offered a grant there for her work as a political scientist. He described it as “a safe haven for some people” and compared it to “the 1920s, when Berlin was full of Russian émigrés.”

Growing up in Russia, “I always felt that there was something hidden. Secrets were everywhere,” Sergei Lebedev said.Credit…Mustafah Abdulaziz for The New York Times

Before he devoted himself to writing full-time, first as a journalist and then as a novelist, Lebedev, like his parents, worked as a geologist. Part of a team of scientists who collected minerals for museums and private collections, he ventured to remote parts of Russia, including northern regions where he discovered the abandoned gulags that were shut down in the late 1950s. Later he connected this experience to the history of his maternal grandmother’s second husband, a decorated war hero who helped run some of those camps under Stalin.

“It was then I realized that maybe some things in my life were not accidents,” Lebedev said. “I thought maybe my work as a geologist is something important now, because I have seen this man’s secret kingdom, and I can bring him back to the light from the shadows.”

The experience motivated Lebedev to write his first novel, “Oblivion,” which explored the legacy of the Soviet prison camp system in a way that, according to Bouis, who has translated all but one of his novels, no Russian writer had done since Aleksandr Solzhenitsyn.

“Sergei has that same kind of moral compass,” she said. “‘Untraceable’ is really a moral and philosophical study of what kind of people make poison. Why do they do that? And what are the ramifications for you as a human being if you fall into that line of work?”

In the book, Vladimir Putin’s name is never mentioned, nor are Russia’s Federal Security Service, or F.S.B., or its predecessor, the K.G.B. “They are necessary for this story, but it’s not directly about them,” Lebedev said. “It’s about knowledge and power and the dark romance between totalitarianism and science during the 20th century.”

Kaletin, the scientist at the heart of “Untraceable,” is based on a charismatic family friend who served as a military medic but in reality, Lebedev said, worked in biological warfare. “This fact was revealed only in the 1990s when a lot of secrets lost their cover and a lot of people started to speak,” he added.

Those stories of lies and deception figure into all of his work, which include his earlier novel “The Year of the Comet,” written from the perspective of a boy seduced by the fabled exploits of his elders. They are woven into “Untraceable,” too, along with his lingering ambivalence about Russia and the fall of the Soviet Union. “I was a very double-minded person, as all Soviets were,” Lebedev said.

“I always felt that there was something hidden. Secrets were everywhere,” he added. “You feel like you exist in two contradictory universes — so writing novels is a way of curing myself.”