New presidents want to look forward, not back, and Joseph R. Biden Jr. is no exception, taking office with a lengthy menu of plans and an aggressive timetable for scrubbing away the policies of his predecessor.

But Mr. Biden’s often-expressed desire not to dwell on the sins or even the potential crimes of President Trump, in the name of national unity, is clashing with the will of Democratic voters who want to fully air any wrongdoing and punish Mr. Trump and his enablers, after an election in which many Biden voters were inspired less by passion for him than by rage at the president.

Starting with a split-screen inauguration week, in which Mr. Trump’s Senate impeachment trial could begin as soon as Thursday, the opening chapters of the new administration are likely to be marked by tension among Democrats about how to move forward. Party institutionalists led by Mr. Biden want to hammer out deals with congressional Republicans, while the Democratic base is eager for Mr. Trump, his allies and his family members to be held fully accountable.

“Many of us voted to get Trump out, not necessarily to be pro-Biden,” said Nancy MacEoin, 47, a criminal defense lawyer in Philadelphia. “Backing off any sort of prosecution of Trump is going to alienate those people.”

Interviews with two dozen Biden voters across the country found near unanimity that it was important for the Senate, the Justice Department and state prosecutors to aggressively pursue Mr. Trump, his family members and top aides — holding them accountable well beyond the impeachment charge against the president for inciting the Capitol riot on Jan. 6. The consensus cut across differences of ideology, income, race and sex.

“He’s a crook and he needs to pay for the crimes he’s done,” said Teresa Steele, a Republican in Denton County, Texas, who voted for Mr. Biden.

After the House impeached Mr. Trump last week, Mr. Biden — who took no public position on the matter before the vote — said he hoped the Senate trial would not conflict with confirmations for his cabinet nominees or other top priorities like a new economic stimulus package.

Senator Lindsey Graham, a Trump ally, called for Senate Democrats to stand down on impeachment, warning, “We will be delaying indefinitely, if not forever, the healing of this great nation if we do otherwise.”

But Democratic voters vehemently rejected the idea that by aggressively pursuing Mr. Trump, Mr. Biden would sacrifice political capital or impede the country from unifying, a theme of his campaign.

“I can’t help but cringe when I hear Republicans calling for unity,” said Laura Gutknecht, 67, an engineer at a radio station in Madison, Wis. “Now, unity? It’s very hard to take them seriously. They’ve done nothing to unite the country, unless it’s uniting against this person or that group.”

Many Democrats were scornful of trying to work with elected Republicans at all, citing the obstruction by Senator Mitch McConnell of Kentucky, the Republican leader, to almost all Democratic initiatives of recent years.

“For the last four years, everything the Democrats tried to do, they got the door slammed in their face,” said Mike Worley, a retired engineer in Panama City, Fla. “Every single motion, Mitch McConnell killed. Democrats have been doing their jobs. Am I worried about the Republicans getting upset? Please, you’re kidding me. I want to see them cringe and cry.”

Some Biden voters said they hoped that convicting Mr. Trump in the Senate, which requires a two-thirds vote, would not slow down important priorities of the new president, including speeding economic relief during the coronavirus pandemic, pushing for more affordable health care and raising the minimum wage. “If they’re going to work on impeaching Trump, that’s great,” said Belinda Rogers, a bus driver in Austin, Texas. “But they also need a priority of helping all people. That means bringing the minimum wage up so people can afford to live.” 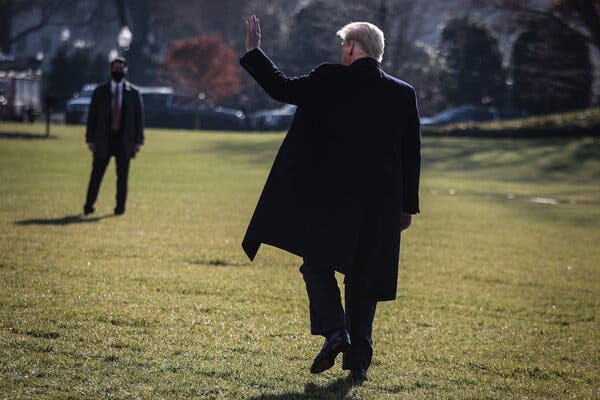 After leaving office, President Trump will face legal jeopardy that he had avoided as the sitting president.Credit…Oliver Contreras for The New York Times

Polls show that Mr. Trump is leaving office with the lowest approval rating of his presidency, and that a majority of Americans say he bears some responsibility for the lawless breach of the Capitol by his supporters. In a Pew survey, a majority of Democrats said Mr. Biden should try his best to work with G.O.P. leaders in Congress. But a majority of Republicans want their leaders to “stand up” to Mr. Biden rather than seek consensus.

After leaving office, Mr. Trump will face legal jeopardy that he had avoided as the sitting president. In New York, federal and state prosecutors are reportedly looking into an array of possible violations, including hush-money payments to women who said they had affairs with him, as well as the practices of Mr. Trump’s businesses. In Georgia, a district attorney is weighing a criminal investigation of Mr. Trump for trying to coerce elections officials to “find” him more votes after he lost the state.

Last year, Mr. Biden said he didn’t think it was “good for democracy” to prosecute a former president. He said he would leave the choice of whether to pursue federal cases to the Justice Department. And by naming Merrick B. Garland, a moderate appeals court judge, to be attorney general, Mr. Biden signaled a reversal of Mr. Trump’s warping of the Justice Department to attack his political enemies.

But many Democratic voters said that letting Mr. Trump go unpunished, including his potential violation of the constitutional ban on profiting from a foreign government while in office, would only encourage future autocratic behavior in the White House.

“The next guy who wants to be dictator or whoever, he’s going to be a lot smarter than Trump,” said Robert Landry, a retired truck driver in Two Rivers, Wis. “If you don’t hold these people accountable and say, ‘No, this is too far,’ somebody’s going to come along and push it further. I believe some of those people are already in Congress.”

A political independent, Mr. Landry, 69, is hardly a moderate arguing for comity across the aisle. On the contrary, he lamented that former President Barack Obama had “tried to do kumbaya” after taking office, rejecting broad inquiries into the George W. Bush administration over domestic spying and the use of torture by the C.I.A.

That was a mistake, Mr. Landry said, complaining that Democrats don’t play hardball the way Republicans do. “If they let people get away with stuff, they’ll lose my vote,” he said. “I won’t vote Republican again, but I won’t vote Democratic.”

Democratic voters rejected the view that a Senate trial of Mr. Trump would only inflame national divisions, arguing that the deep divides in the country could hardly be worse, and that the expectation of bipartisanship was mostly an illusion.

“The Democrats have unsuccessfully tried to be moderate in order to gain compromise and cooperation over and over again, and it hasn’t worked and it’s not going to work,” said Dave Bone, 54, an energy efficiency consultant who lives in Philadelphia.

He said that Mr. Biden should press ahead with grand overhauls on issues like health care and income inequality rather than seek to appease Republicans.

“I find that there are a lot of people on the left who view the country through rose-colored glasses right now — that because Biden won and eked out a victory in the Senate, that somehow we’re on a path to bipartisan bliss, and it ain’t happening,” Mr. Bone said. “We’re in a bad place right now.”

Arturo Sutter, a Biden voter in Miami, said that if the actions of Mr. Trump and his family are not fully investigated and punished, Trumpism will extend a grip over Republican politics for decades, in the same way that Juan Perón, another demagogic populist, still overshadows Mr. Sutter’s native Argentina.

“I’m 60 years old, Evita was dead seven years before I was born,” Mr. Sutter said of Mr. Perón’s wife, a partner in power. “In Argentina, they are still claiming Evita and Perón were the best things in the world.”

“Whatever justice can do to show how this person used the government to enrich himself and his friends and family, it will help,” he said of Mr. Trump.

“So many people are convinced of so many fantasies,” he said of Trump supporters.

“I saw this movie before.”

Reporting was contributed by Jon Hurdle in Philadelphia, Kay Nolan in Wauwatosa, Wis., and Kathleen Gray in Detroit.