MOSCOW — Russians rallied in support of the jailed opposition leader Aleksei A. Navalny in more than 100 cities on Saturday, the biggest protests the nation has seen since at least 2017.

It was a wave of anger that rolled through the country of 11 time zones from east to west, starting at Russia’s main port cities on the Pacific and moving on to the frigid streets of Siberia, where it was as cold as minus 60 degrees Fahrenheit. The biggest protests, which drew well over 10,000 people, were in Moscow, the capital, where riot police officers in camouflage, body armor and shiny black helmets wielded batons to try to clear the throngs that packed Pushkin Square in the center of the city.

More than 3,000 people were detained nationwide, an activist group said. Many of the demonstrators at the protests, which were unauthorized, appeared undeterred by the threat of jail time as they chanted slogans against President Vladimir V. Putin.

But the protests seemed unlikely to push the Kremlin to change course. The state news media condemned them as a “wave of aggression,” and law enforcement officials vowed to prosecute anyone who had attacked the police.

The question is whether more protests will follow — and whether more Russians, frustrated by stagnant incomes and official corruption after two decades of rule by Mr. Putin — will join Mr. Navalny’s movement. By Saturday evening, his supporters were already pledging to hold more rallies next weekend.

“If Putin thinks the most frightening things are behind him, he is very sorely and naïvely mistaken,” said Leonid Volkov, a top aide to Mr. Navalny. 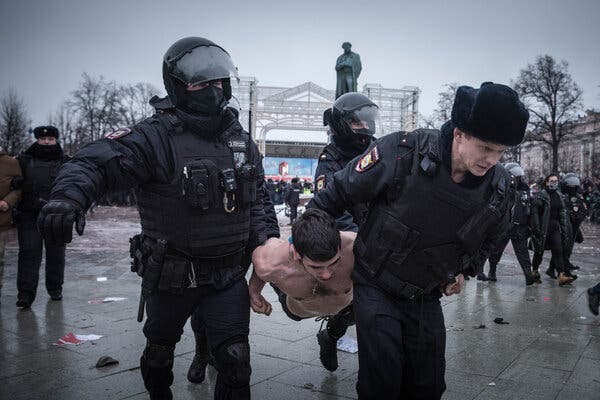 Above, the riot police detaining a man in Pushkin Square. The demonstrators appeared to be more brazen than in years past. Below, demonstrators holding banners that read, “Don’t be afraid. Don’t be silent” and “One for all and all for one” under a statue of Alexander Pushkin, Russia’s best-known poet.

The riot police repeatedly charged the crowd, swinging batons. In Moscow alone, more than 1,200 people were detained, according to the OVD-Info activist group, which counts arrests.

Some people sought shelter in surrounding cafes, shops and subway stops. Police officers took some people into custody while letting most go, in a seemingly arbitrary manner.

Some of the protesters, however, did not shirk from confronting the police. When the officers charged, some people fought back, at times throwing objects.

The call to protest went viral on social media, particularly on TikTok, a short-video app that is popular with children and teenagers. But the protesters represented a cross-section of generations.

The authorities shut down most mobile internet connectivity around the protests, but images of detentions and confrontations between protesters and police officers were still widely seen.

As has been the case in past protests, the state’s show of force was overwhelming. Polls show Mr. Putin’s approval ratings in decline, and the Kremlin appears to be taking no chances.