In December, pharmacists made the happy discovery that they could squeeze an extra vaccine dose out of Pfizer vials that were supposed to contain only five.

Now, it appears, the bill is due. Pfizer plans to count the surprise sixth dose toward its previous commitment of 200 million doses of Covid vaccine by the end of July and therefore will be providing fewer vials than once expected for the United States.

And yet, pharmacists at some vaccination sites say they are still struggling to reliably extract the extra doses, which require the use of a specialty syringe.

“Now there’s more pressure to make sure that you get that sixth dose out,” said Michael Ganio, the senior director for pharmacy practice and quality at the American Society of Health-System Pharmacists.

For weeks, Pfizer executives pushed officials at the Food and Drug Administration to change the wording of the vaccine’s so-called emergency use authorization so that it formally acknowledged that the vials contained six doses, not five.

The distinction was critical: Pfizer’s contract with the federal government requires that it be paid by the dose. And there were serious public health implications. If the label’s formal language told people administering the vaccine that the vial contained a sixth dose, that could accelerate the pace of vaccinations at a crucial time.

At one point, Pfizer executives lashed out at the top federal vaccine regulator over the government’s hesitation to approve the request, according to people familiar with the discussions who were not authorized to discuss them.

On Jan. 6, Pfizer got what it wanted. The F.D.A. changed the language in its fact sheet for doctors to confirm that the vials contain a sixth dose. The change mirrored similar labeling updates by the World Health Organization and the F.D.A.’s counterpart in the European Union.

Company officials, including the chief executive, Dr. Albert Bourla, have said that the sixth dose allows Pfizer to stretch its supply of scarce vaccine even further — it was one factor, for example, in the company’s new estimates that it will be able to manufacture two billion doses for the world this year, instead of the 1.3 billion it had originally planned.

A Pfizer spokeswoman, Amy Rose, said the company would “fulfill our supply commitments in line with our existing agreements — which are based on delivery of doses, not vials.”

When Pfizer first began shipping the vaccines in mid-December, it said that each vial contained enough liquid for five doses. But pharmacists in hospitals across the country soon noticed that the vials held enough for a sixth — and sometimes a seventh — dose. The discovery prompted a flurry of excitement and confusion, with some pharmacists throwing out the extra vaccine because they did not have permission to use it.

But they were soon advised by the F.D.A. that they could use those extra doses, which could be extracted with a so-called low dead volume syringe that is designed to cut down on wasted medication and vaccines.

Suddenly, it seemed as if the 100 million doses of vaccine that Pfizer has promised to the United States by the end of March would stretch to as much as 120 million — a welcome development given the scarcity of Covid-19 vaccines and the coronavirus pandemic’s mounting death toll.

But Pfizer insisted that those doses be counted toward its existing contract. It can now sell vials the United States had been expecting to other countries, or charge the United States for them in future deals. That could threaten the wave of good publicity that the company has enjoyed since developing a highly effective vaccine at record speed.

“Pfizer will make a lot of money from these vaccines, and the U.S. government assumed a lot of the upfront risk in this case, so I’m not sure why Pfizer didn’t just continue to fill their supply as planned, even if it meant oversupplying a little,” said Dr. Aaron S. Kesselheim, a professor of medicine at the Brigham and Women’s Hospital and Harvard Medical School, who studies drug prices.

Pfizer’s accounting for the extra dose is already creating controversy in Europe, where some countries — like Belgium — say they have had to cancel vaccination appointments after discovering that Pfizer is sending them fewer vials. “It’s linked to the sixth dose,” Sabine Stordeur, an official overseeing vaccination efforts in Belgium, told the newspaper Le Soir. “It’s still a private company, so one shouldn’t be surprised.”

The U.S. negotiations come at a particularly harrowing time, as the Biden administration is said to be discussing the purchase of a third round of 100 million doses of Pfizer’s vaccine later in the year. The country is racing to vaccinate as many people as possible before more contagious virus variants become widespread, potentially spurring a wave of new hospitalizations and deaths.

Pfizer’s efforts to capitalize on the discovery were for weeks camouflaged in a bureaucratic language dispute. Before Christmas, Pfizer approached F.D.A. officials requesting a formal change to its fact sheet so that it said each vial contained six doses of vaccine instead of five. But regulators instead suggested the phrase “up to six doses,” depending on what kinds of needles and syringes were used to extract the vaccine. 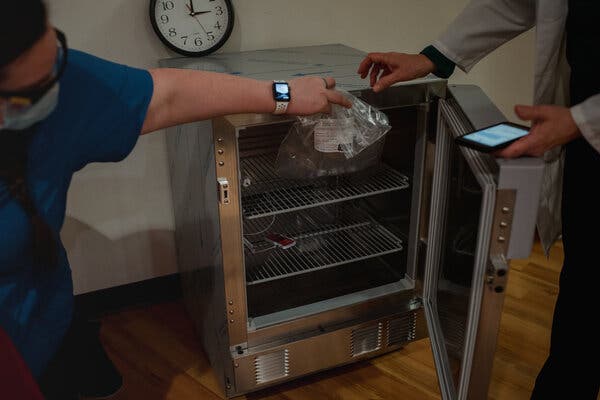 Vials of Pfizer’s vaccine retrieved from a freezer at Temple University Hospital in Philadelphia during the first week of vaccinations in December.Credit…Hannah Yoon for The New York Times

After the F.D.A. signed a new fact sheet with that more cautious language, Pfizer approached F.D.A. officials again, saying it was crucial to say “six doses.” The company suggested altering the language to indicate that low dead volume syringes should be used. At one point, Pfizer executives lashed out at Dr. Peter Marks, the top vaccine regulator at the F.D.A., according to two people who heard about the exchange but were not authorized to discuss it.

An F.D.A. spokeswoman disputed that characterization of the exchange and said it was “constructive.”

Ms. Rose, the Pfizer spokeswoman, said that “in a situation of limited vaccine supply amidst a public health crisis, our intent with this label change is to provide clarity to health care providers, minimize vaccine wastage, and enable the most efficient use of the vaccine.”

In late December, federal health officials sought to figure out whether there were enough of the specialized syringes to justify the shift. Officials at the Centers for Disease Control and Prevention said they were uncertain whether the supply was sufficient, according to a person familiar with the conversations.

But federal health officials who manage the government’s contracts for syringes told the F.D.A. that more than 70 percent of the sites were using the more efficient syringes and that more could be easily bought or manufactured, according to another person knowledgeable about the situation.

Still, Pfizer’s attempts to pressure the F.D.A. unsettled some health officials, especially since the company itself originally calculated that the vials contained five doses. If an extra dose could be extracted, that would mean the vaccine supply could be stretched, protecting more Americans from the virus. On the other hand, too few of the specialty syringes would mean the government could end up paying for wasted doses.

By early January, the debate was resolved after a “standard and usual legal review process,” an F.D.A. spokeswoman said. On Jan. 6, in an amendment to the emergency authorization, the F.D.A. formally changed the vaccine’s fact sheet to specify six doses.

In a statement, an F.D.A. spokeswoman said that the agency considered several factors when agreeing to Pfizer’s request, including the availability of the special syringes, the fact that other health authorities had made a similar decision and that the change would vaccinate Americans more rapidly.

Pfizer and the federal government have agreed to track which sites are receiving the syringes and other equipment needed to extract the additional dose, and that the company will not charge the United States for six doses per vial at sites that don’t have that equipment, according to a person familiar with the negotiations who was not authorized to speak because the talks are confidential.

Beginning as soon as next week, the number of Pfizer vaccines that the federal government allocates to each state could be based on the assumption that each vial contains six doses, according to a federal official not authorized to discuss the matter. The C.D.C. and the Department of Health and Human Services were discussing as recently as Friday afternoon when they might make the shift.

Pharmacists around the country are still reporting that they don’t have the right supplies to reliably extract extra doses, said Erin Fox, the senior pharmacy director for drug information and support services at the University of Utah.

She said Pfizer deserved credit for developing the vaccine, but “it isn’t fair to people that can’t access the right syringe and needle combination to be able to get that sixth dose out.”

The contracts for low dead volume syringes are managed by the Department of Health and Human Services’ Biomedical Advanced Research and Development Agency. A spokeswoman for the agency said the federal government had procured enough of the syringes for the Pfizer vaccine currently available and was working with the company to “track current inventory and future deliveries of these specific syringes for Pfizer and continually comparing them to projected delivery of doses from Pfizer.”

Dr. Fox said that McKesson, the distribution company that has contracted with the federal government to deliver vaccination supplies, is still sending kits that contain only enough supplies for five doses per vial.

A McKesson spokesman said the company began sending out kits that account for the sixth dose this week.

Jen Psaki, the White House press secretary, said on Thursday that the Biden administration might use the Defense Production Act to accelerate production of the specialized syringes in order to increase supply, suggesting that the federal government is uncertain whether it will have enough in the future.