WASHINGTON — Speaker Nancy Pelosi said on Friday that House impeachment managers were preparing to prosecute President Trump in the Senate, but she refused to offer a timeline for when they would move forward with a never-before-attempted trial of a former president.

At a news conference two days after the House impeached Mr. Trump in a bipartisan vote, Ms. Pelosi made clear that her first priority was ensuring the security of the Capitol and lawmakers before President-elect Joseph R. Biden Jr.’s inauguration on Wednesday.

But growing emotional at times as she recounted seeing the image of a rioter barging through the Capitol in a “Camp Auschwitz” sweatshirt, Ms. Pelosi vowed accountability would soon follow for Mr. Trump, whom the House charged with “incitement of insurrection” for his role in instigating a violent mob that stormed the building. She also pledged to pursue the perpetrators of the rampage as well as far-right lawmakers if they were found to have aided in the assault.

“One week ago, on Jan. 6, there was an act of insurrection perpetrated on the Capitol of the United States, incentivized by the president of the United States,” she said. “One week later, Wednesday to Wednesday, that president was impeached in a bipartisan way by the House of Representatives — so urgent was the matter. They are now working on taking this to trial.”

The speaker’s decision to delay sending the article was reminiscent of a similar maneuver a year ago, when she waited almost a month to press charges against Mr. Trump after the House voted to impeach him the first time for pressuring Ukraine to smear Mr. Biden. This time, though, Democrats in both chambers involved in the impeachment case said they expected the delay to be brief. Ms. Pelosi could transmit the article as soon as Monday, they said, prompting the start of a trial just as power is being transferred to Mr. Biden.

The House was waiting, at least in part, to determine the outcome of negotiations between Senate Democrats and Republicans over the shape of a highly unusual proceeding. On the cusp of taking unified control of Washington, Democrats were working to draft rules that would allow the Senate to operate on dual tracks to confirm Mr. Biden’s cabinet and begin moving his legislative agenda while trying Mr. Trump.

Unlike a year ago when he sought to use the trial rules to undercut the prosecution, Senator Mitch McConnell, the Republican leader, who is said to approve of the impeachment drive, appeared more willing to work in concert with Democrats.

Senator Kevin Cramer, Republican of North Dakota, told Business Insider that Mr. McConnell had told him the decision to acquit or convict was a “vote of conscience” — a stark departure from the last trial, when Mr. McConnell actively worked to acquit the president.

Mr. Cramer said he did not want to convict Mr. Trump, but would consider voting in favor of disqualifying him from holding future office. The Senate could apply that punishment by a simple majority vote, but only if two-thirds of senators first found Mr. Trump guilty. That would take 17 Republicans joining all 50 of the Senate’s Democrats to vote to convict.

Republicans were already measuring the difficult political and constitutional dilemma the trial would present. Mr. Trump remains the most popular figure in their party, and elected Republicans will have to balance their own anger at his actions with the potential backlash to finding him guilty of high crimes and misdemeanors and blocking him from another term. 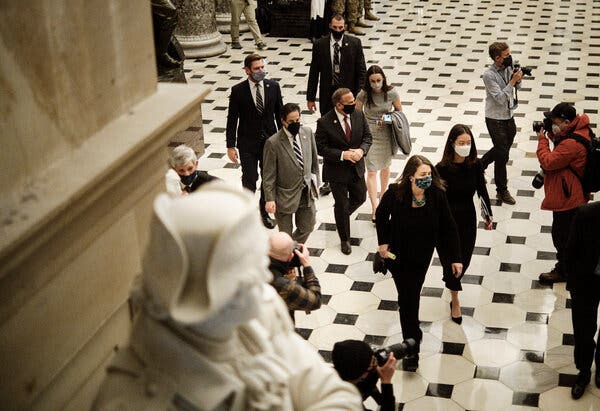 The House impeachment managers were wrestling with how to present their case when both the prosecutors and the jury were witnesses and victims of the offense.Credit…T.J. Kirkpatrick for The New York Times

“A conviction of Trump may mean he doesn’t run again, but it doesn’t mean he gives up without a fight,” Mr. Cramer told Business Insider.

It was hard to overstate the fury of some Republican senators, whose lives — along with that of the vice president — were endangered during the siege. Senator Ben Sasse, a Nebraska Republican who has expressed openness to the impeachment case, warned in a statement on Friday that “rage-peddlers are going to try to whitewash the attack on the Capitol.”

“Every American needs to understand what the Department of Justice has just made public: Investigators have strong evidence to suggest that some of the rioters who stormed the United States Capitol planned to kidnap and possibly assassinate the vice president,” Mr. Sasse said.

“These men weren’t drunks who got rowdy,” he added, “they were terrorists attacking this country’s constitutionally mandated transfer of power.”

Meeting privately for a third consecutive day, the House impeachment managers, led by Representative Jamie Raskin of Maryland, raced on Friday to assemble a trial strategy. They announced they had retained Barry H. Berke, a leading New York defense lawyer, and Joshua Matz, a constitutional scholar, to serve as counsels for the trial. Both men served similar roles during the first impeachment.

Their case was as simple as it was extraordinary, and in a bizarre constitutional twist, they were wrestling with how to present it when both the prosecutors and the jury were witnesses and victims of the offense.

How a trial might work was proving to be just as complicated.

When the Senate last met as a court of impeachment in February 2020, it was presided over by Chief Justice John G. Roberts Jr. of the Supreme Court. But the Constitution stipulates only that the chief justice must oversee the proceeding when a current president is on trial, throwing into doubt who would lead the chamber this time around.

The task could conceivably be left to the president of the Senate, which after Wednesday will be Vice President-elect Kamala Harris. Or, if Ms. Harris does not want to become embroiled in the proceeding during her first days in office, she could possibly cede the responsibility to the Senate president pro tempore, Senator Patrick J. Leahy, Democrat of Vermont.

But other constitutional scholars argued that because the charge was lodged while Mr. Trump was still president, Chief Justice Roberts should preside again.

The question was wrapped up in broader uncertainty about the Senate’s jurisdiction over Mr. Trump once he leaves office. While former government officials have been tried for impeachable offenses, no former president has. Some conservatives were pointing to the lack of precedent, and the Constitution’s silence on the matter, to argue that the Senate had no right to sit in judgment of Mr. Trump after Wednesday.

That appears to be the minority view. The Senate did try President Ulysses S. Grant’s secretary of war in the 1870s, after he had already resigned. Many legal scholars believe that is enough precedent to do so with Mr. Trump, and in any case, they argue it is highly unlikely that the Supreme Court would challenge the Senate’s decision if a majority of the body were in favor of hearing the case.

The chief justice declined to comment on Friday through a Supreme Court spokeswoman.

Senators and their aides were also trying to determine how they could alter the physical layout of the Senate chamber and attendance requirements to operate the trial safely during the pandemic. In the past, impeachment rules have required that all 100 senators sit at their desks inside the chamber whenever the trial is in session, and members of the prosecution and defense teams crammed around curved tables set up in the well of the Senate. But doing so now with an airborne virus ravaging the country — and the halls of Congress — would be unsafe.

Nor was it clear who would defend Mr. Trump or whether he would mount a defense at all. A mix of White House and private lawyers did so last time, but people familiar with the president’s thinking said on Friday that the leading candidates were Rudolph W. Giuliani and John Eastman, a conservative constitutional scholar. Both men spoke at a rally near the White House just before the rioting broke out where Mr. Trump urged the thousands gathered to “fight like hell” and to go to the Capitol where Congress was meeting to formalize Mr. Biden’s victory.