NEWARK — Construction workers in the South Ward of Newark, one of New Jersey’s most distressed areas, are busy converting a long-abandoned bank into an apartment building and poets cafe.

A decrepit mansion in the Central Ward built by a Newark beer baron before the turn of the 20th century is being revamped as a “makerhood,” a first-of-its-kind co-working residential and retail space.

Siree Morris, a developer, recently finished erecting six three-bedroom apartments on a formerly vacant lot. Next up: condos made from shipping containers and an affordable-housing complex named for his slain brother, Michael, on the street where they grew up.

While the downtown corridors of Newark, a poor industrial city burdened by decades of disinvestment, have been on the rebound for years, much of the rest of the city had been largely left behind.

But now even the city’s far-flung residential neighborhoods are in the midst of a slow recovery.

The transformation, fueled largely by a push to expand affordable housing and homeownership in this city of renters, is part of a deliberate strategy with an ambitious goal: erasing Newark’s long legacy of blight without pushing out residents, 86 percent of whom are Black or Latino. 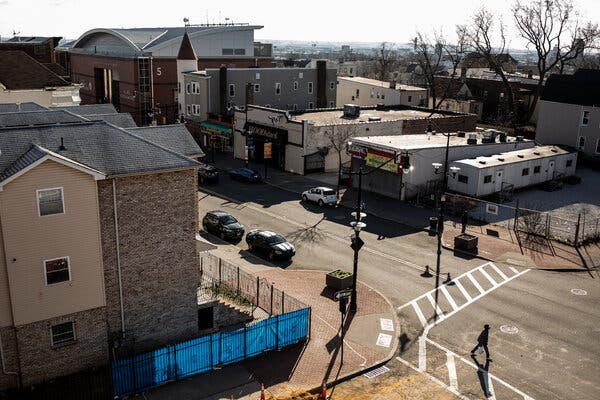 “It’s coming up the hill, into the inner city,” Arnita Rivers, a Newark resident who runs a variety store and barbershop and also works as a housing contractor, said of redevelopment.Credit…Bryan Anselm for The New York Times

The challenge of avoiding gentrification while revitalizing a city once synonymous with urban decay is steep.

More than a quarter of Newark’s 282,000 residents live in poverty and only 22 percent own homes. Many neighborhoods are still reeling from the 2018 discovery of elevated levels of lead in tap water.

Streets are pockmarked by an estimated 2,000 vacant lots, haunting reminders of the middle-class exodus that began before the city erupted in flames during five days of deadly unrest in 1967 and accelerated in the decades that followed.

And Newark, New Jersey’s largest city, is now struggling under the catastrophic weight of the coronavirus: One in 342 residents has died from virus-related complications.

But there are also signs of hope. Side streets are alive with forklifts and hard hats. Older men gather on corners, sharing stories of days gone by and expressing optimism for even the most overlooked swaths of the city. A breakfast for homegrown entrepreneurs — an extension of monthly “men’s meetings” initiated by Newark’s mayor, Ras J. Baraka — attracted 2,500 just before the start of the pandemic.

“You take it one property at a time, one parcel at a time,” said Mr. Morris, 38, who has continued to build throughout the pandemic. “That’s the only way to rebuild a community.”

But in the last five years, more than 3,500 units of affordable housing have also been built or are underway, much of it outside downtown, city records show. Newark sold almost double the number of abandoned parcels at auction in 2020 as it did in 2019, and the average price of land — none of it downtown — was about 30 percent higher. Between 2015 and 2020, major crime, including murder, robbery and assault, plummeted by 40 percent.

“This right here is extremely personal to me,” said Siree Morris, a lifelong resident of Newark whose company recently finished construction of two new apartment buildings on a formerly vacant lot.Credit…Bryan Anselm for The New York Times

Big neighborhood projects, like a $100 million expansion of Beth Israel Medical Center, are moving forward alongside smaller ones, including a 51-unit housing complex for seniors and the renovation of three homes that will be sold to residents of public housing using Section 8 vouchers.

Even the brutal economic fallout of the pandemic is not expected to erase Newark’s gains.

“They took advantage of the growth in downtown, and the strength, and they put effort into all of the wards,” said Doug Goldmacher, an analyst with Moody’s Investors Service, a financial rating agency.

“Even in this terrible circumstance that they’re in — it is not going to be a good year for them — they’re still going to be better than they were.”

Mr. Baraka, a former high school principal and Newark councilman whose father was the fiery poet Amiri Baraka, was elected mayor in 2014. He talks frequently of “equitable development,” building wealth among residents and creating opportunity for minority-owned businesses.

One start-up business owner, Narelle Myke, 41, works full time in the pharmaceutical industry. But she moonlights as a residential housing developer, and much of her work is in Newark.

“I think there’s a good middle ground,” Ms. Myke said about gentrification. “Not necessarily Brooklyn. Not necessarily Hoboken. But a mix. A reimagined Newark.”

The mayor’s monthly “men’s meetings” and “women’s meetings” started as a way to prod residents to take more responsibility for neighborhood safety and upkeep but slowly grew into business incubators. City officials and established developers would offer guidance on buying property, navigating zoning laws and bidding for contracts.

“We talk about the difference between money and wealth,” said Mr. Baraka, a Democrat. “We had a couple of meetings where we talked simply about inheritance — ‘Do you really want to sell your mother’s house?’ — and the importance of passing wealth down.”

Not everyone is satisfied with the strategy.

The dilapidated Krueger-Scott Mansion will become a co-working residential and retail space known as a “makerhood.” Artisans will pay $1,800 a month for an apartment and shop.Credit…Bryan Anselm for The New York Times
The old Krueger-Scott Mansion, which was built in 1888.Credit…Dr. Samuel Berg, via Newark Public Library
An advertisement for the Krueger brewery.Credit…via Library of Congress
“What if we purposefully designed the living-above-the-store kind of development?” Avi Telyas, a developer who grew up above his father’s shop in Tel Aviv, said about the makerhood model. Credit…Bryan Anselm for The New York Times

Some community activists fault the mayor for focusing too much on housing at the expense of retail growth outside downtown. The pace of housing development, they say, is too slow to bring about radical change or to stave off wide-scale gentrification.

“If they’re trying to uplift the community and give the residents better footing, I don’t think that is what’s happening,” said Anthony Diaz, a founder of the Newark Water Coalition, a group that in 2018 focused attention on the elevated lead levels in tap water.

“There are generations of families that can’t afford to live in this city anymore,” he added.

The pandemic’s effect on the city’s current residents and their ability to secure loans to buy or rebuild homes — or to afford even a slight increase in rent — should not be overlooked, said Marjorie Perry, a longtime developer who lived in Newark public housing until she was 10 and is working on several major construction projects in the city.

“The people who live here are the first people to lose their jobs,” Ms. Perry, 69, said.

And they have. Newark’s unemployment rate has more than doubled during the pandemic, climbing to 17 percent in November, up from 7 percent a year ago.

Others remember an early, largely unsuccessful effort by Mr. Baraka to encourage homeownership: a sale of 98 abandoned lots for $1,000 apiece to couples on Valentine’s Day in 2015. Many of the lots eventually landed back on the city rolls, undeveloped.

The city is hoping to soon rewrite that history. Dozens of abandoned lots are expected to be among the first parcels sold through the Newark Land Bank, the only initiative of its kind in New Jersey, modeled on similar programs in Chicago, Detroit and Philadelphia.

Unlike the Valentine’s Day homesteading initiative, land bank buyers can access free legal and technical expertise, and city residents will be prioritized. Homeowners will also be able to buy small abandoned “side lots” adjacent to their houses at nominal rates. Rarely attractive to developers, the lots, once reclaimed, will eliminate eyesores while adding value to homes, said Bernel Hall, chief executive of the city’s development arm, Invest Newark.

“We’re trying to disrupt the cycle of speculation,” Mr. Hall said, “and make sure people from Newark are able to invest in their own hometown.”

“They’re very big on, ‘How are we going to support the community so the community can support itself?’” Ms. Perry said of city leaders. Credit…Bryan Anselm for The New York Times

The city has also taken other steps to try to avoid excess gentrification.

Three years ago, Newark passed a citywide ordinance that requires most builders of more than 30 housing units to set aside 20 percent as affordable, and to give rental priority to Newark residents.

A newly established social impact equity fund, 40 Acres and a Mule, is on track to reach its first-quarter goal of $10 million, Mr. Hall said — capital that will be available to under-banked local businesses.

Allison Ladd, a former top housing official in Washington, D.C., hired as the city’s redevelopment guru about 18 months ago, said the pandemic itself may offer new commercial opportunities for transit hubs like Newark. The city, she said, should be ready to welcome newcomers fleeing higher-density cities as well as corporations forced to rethink location strategies.

“We have to take the opportunity and figure out what the future can be,” Ms. Ladd said.

And all of it takes time.

“And you’ve got to celebrate flowers in the concrete.”