SYDNEY, Australia — One case. One young security guard at a quarantine hotel who tested positive for the coronavirus and experienced minor symptoms.

That was all it took for Perth, Australia’s fourth-largest city, to snap into a complete lockdown on Sunday. One case and now two million people are staying home for at least the next five days. One case and now the top state leader, Mark McGowan, who is facing an election next month, is calling on his constituents to sacrifice for each other and the nation.

“This is a very serious situation,” he said on Sunday as he reported the case, the first one the state of Western Australia had found outside quarantine in almost 10 months. “Each and every one of us has to do everything we personally can to stop the spread in the community.”

The speed and severity of the response may be unthinkable to people in the United States or Europe, where far larger outbreaks have often been met with half measures. But to Australians, it looked familiar.

The lockdown in Perth and the surrounding area followed similar efforts in Brisbane and Sydney, where a handful of infections led to steep ramp-ups in restrictions, a subdued virus and a rapid return to near normalcy. Ask Australians about the approach, and they might just shrug. Instead of loneliness and grief or outcries over impingements on their freedom, they’ve gotten used to a Covid routine of short-term pain for collective gain.

The contrast with the United States and Europe — sharp at the start of the pandemic — has become even more marked with time. Fewer Australians have died in total (909) than the average number of deaths every day now in Britain and the United States. 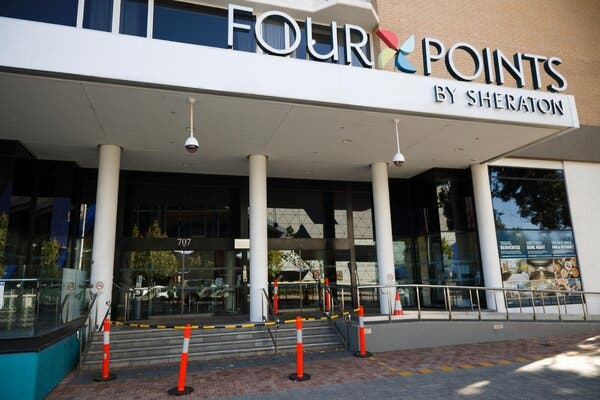 “We have a way to save lives, open up our economies and avoid all this fear and hassle,” said Ian Mackay, a virologist at the University of Queensland who developed a multilayered, or “Swiss cheese,” model of pandemic defense that has been widely circulated. “Everyone can learn from us, but not all are willing to learn.”

Australia is just one of several success stories in the Asia-Pacific. The region’s middle powers, including New Zealand, Taiwan, Thailand and Vietnam, are essentially getting better at managing the virus while the great powers of the World War II era are getting worse.

The center of confidence, if not gravity, continues to shift east, especially as China roars back to life. With successful public health, some argue, comes not just wealth and more stable economies but also national pride and the practical expertise that mutating viruses demand.

“I’m not sure we’re being looked at with enough interest,” Dr. Mackay said.

Australia’s geographic isolation offers it one great advantage. Still, it has taken a number of decisive steps. Australia has strictly limited interstate travel while mandating hotel quarantine for international arrivals since last March. Britain and the United States are only now seeking to make quarantine mandatory for people coming from Covid hot spots.

Australia has also maintained a strong system of contact tracing, even as other countries have essentially given up. In the Perth case, contact tracers had already tested the man’s housemates (negative so far) by the time the lockdown was announced and placed them under 14-day quarantine at a state-run facility. The authorities also listed more than a dozen locations where the security guard might have touched or breathed on someone.

Under the lockdown, people are allowed out of their homes to buy essential items.Credit…Richard Wainwright/EPA, via Shutterstock

Australia’s fight against the coronavirus has not been flawless. The case in Perth illustrates a persistent soft spot — a number of outbreaks have been linked to hotel quarantine, including one in Melbourne late last year that led to a 111-day lockdown. The strict border rules have caused hardship for many people, including thousands of Australians stranded overseas.

But the evidence of the country’s success has been building for months, and it’s been shaped since December less by a complete absence of the virus than by a series of rapid responses that have quashed small outbreaks.

Before Christmas, it was Sydney’s northern beaches, which were locked down as a few, then a few dozen, cases emerged. Holiday plans were ruined, as anyone from greater Sydney was barred from traveling to other states. Testing surged. There were few complaints, and it worked: The city of five million has gone two weeks without a case of community transmission.

Brisbane followed suit in early January with a brief lockdown after a cleaner in its hotel quarantine system became infected with a highly contagious variant of the virus first identified in Britain. It was the mutation’s first known appearance in the community in Australia, and officials moved quickly. Annastacia Palaszczuk, the top official in Queensland, which includes Brisbane, announced the lockdown 16 hours after the positive test.

“Doing three days now could avoid doing 30 days in the future,” she said.

Brisbane is now back to Covid-normal, like all of Australia beyond Perth. Across the country, offices and restaurants are open, with rules mandating physical spacing. Masks are recommended but not required. And large gatherings are in the works: The Australian Open, after facing a series of challenges from infected arrivals, expects to seat 30,000 tennis fans a day when it begins on Feb. 8.

Dr. Mackay, who has worked closely with Australian government officials, called it “the hammer and the dance.”

A beach in the last hour before a lockdown came into effect in Perth on Sunday.Credit…Richard Wainwright/EPA, via Shutterstock

“The lockdowns give everyone in contact tracing and public health a chance to catch their breath, to make sure they interview everyone, that no one forgets then remembers something — and that lets them really stop transmission,” he said.

Europe and the United States seem to prefer, in his words, “the half-baked lockdown.” He said that they put too much faith in the vaccines, failing to recognize that their impact on transmission would be glacial, not instant.

Much of Europe in particular points to fatigue, then failure. An analysis of 98 countries’ responses to the pandemic by the Lowy Institute, an Australian think tank, found that many European nations topped the Covid performance rankings a few months ago. Britain, France and a few others are now closer to the bottom, along with the United States.

“They didn’t go far enough,” said Hervé Lemahieu, a Lowy research fellow originally from Belgium who led the study with Alyssa Leng. “When they did make gains, they relaxed too soon.”

Police officers monitoring people to be tested at a clinic in Perth on Sunday.Credit…Richard Wainwright/EPA, via Shutterstock

As of Monday afternoon, no other infections had been found in Western Australia. Inside the shuttered area, residents quickly adapted. Masks purchased months ago were put to use. Workers in nursing homes called the families of every resident to go over protocols.

Allan Thompson, an investment banker in Perth, said he was one of many racing back to their houses on Sunday to do their part.