ADDIS ABABA, Ethiopia — For two decades, as foreign minister, Seyoum Mesfin was Ethiopia’s face to the world — a personable and soft-spoken diplomat who brokered peace in neighboring war-torn countries, delivered speeches at the United Nations and helped establish his country as a weighty African power.

That distinguished career came to an ignominious end last week when Ethiopian soldiers tracked down Mr. Seyoum, now labeled an enemy of the state, and killed him in a muddy and remote corner of the mountainous north of the country. The government said he died in a shootout, but Mr. Seyoum’s allies say he was executed.

Mr. Seyoum, 71, was the most prominent casualty yet of Prime Minister Abiy Ahmed’s 11-week-old war in Ethiopia’s northern Tigray region. The main target of Mr. Abiy’s military campaign is not a ragtag group of provincial rebels, but the politicians and generals of Tigray, who ruled Africa’s second-most populous country for much of the past three decades through their political party, the Tigray People’s Liberation Front, or T.P.L.F.

Now Ethiopia’s former rulers are on the run in their Tigray heartland, and on the defensive against the forces they once commanded. Since Jan. 7, Ethiopia’s military has killed or captured at least 47 people from a most-wanted list of 167 senior leaders of the T.P.L.F., including four of the party’s nine-member executive committee, according to Ethiopian state media reports.

When Mr. Abiy came to power in 2018, his government quickly unseated many of these T.P.L.F. leaders, who over 27 years had overseen impressive economic growth, but ruled Ethiopia with an iron fist. Several were charged with corruption and human rights abuses, and some of them fled or retreated to their home base in Tigray.

Mr. Abiy has portrayed his military campaign as a law-enforcement drive against Tigray’s fugitive politicians, who are backed by their own seasoned military force. The Tigrayan leaders went ahead with a regional election in September, in defiance of Mr. Abiy’s order to postpone the vote due to the Covid-19 pandemic. He said he launched his military operation on Nov. 4 in response to an attack on a federal military base in Tigray. 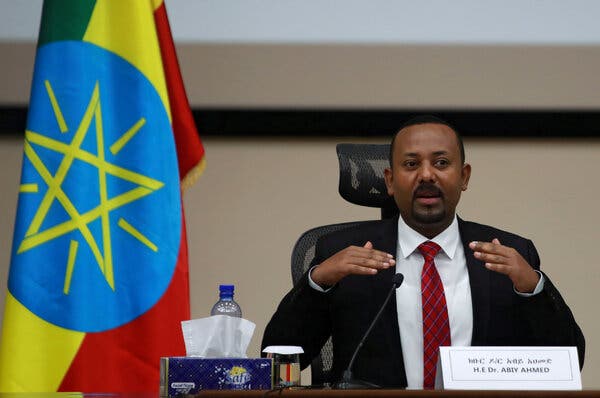 “The government is engaged in a stabilizing mission for a month now while it continues to bring to justice perpetrators,” Billene Seyoum, Mr. Abiy’s spokeswoman, said in a statement.

But the T.P.L.F. says that Mr. Abiy, who was awarded the Nobel Peace Prize in 2019 for resolving a long-running conflict with Eritrea, is revealing himself as yet another power-hungry autocrat. Thousands of people have died in the fighting, by most estimates, and the handful of aid workers who have been permitted to enter Tigray report human rights abuses, burned refugee camps, looted hospitals and a swelling humanitarian crisis that could lead to mass starvation.

Refugees in Tigray are “emaciated, begging for aid that is not available,” Filippo Grandi, the U.N. High Commissioner for Refugees, said in a statement last week.

Despite Mr. Abiy’s recent military successes, the swift and bloodless victory he once promised in Tigray remains far from his grasp. The T.P.L.F. has retreated to the mountains, alongside thousands of heavily armed fighters.

Fighting has raged across the region in recent weeks, according to U.N. security reports seen by The New York Times. Human rights groups have shared accounts of atrocities against civilians, including plunder, sexual violence and killings.

And as Mr. Abiy ramps up his assault on the T.P.L.F., brushing aside international pleas to start peace talks, experts warn that he risks boosting public support for the rebels inside Tigray, and plunging his country deeper into a protracted conflict with an enemy that is unlikely to give up easily.

The T.P.L.F. “is an organization in which the guerrilla ethos of not bowing to external pressure, even when cornered and pressured, is very much in its DNA,” said Rashid Abdi of Sahan, a Kenya-based conflict analysis group specializing in the Horn of Africa. “They have said they will die to the last person. People should not underestimate that.”

A parade marking the 45th anniversary of the establishment of the Tigray People’s Liberation Front, in Mekelle last year.Credit…Michael Tewelde/Agence France-Presse — Getty Images

Mr. Abiy’s forces — with the help of Eritrean troops — hold the regional capital, Mekelle, and much of northern and western Tigray. But sporadic fighting has continued in rural areas across Tigray, and on roads leading to Mekelle, according to Western diplomats and U.N. security assessments.

Although analysts initially estimated the T.P.L.F. had 250,000 men under arms, it quickly became clear that its force was much smaller. Government soldiers and allied ethnic militias surrounded the T.P.L.F.’s forces by sealing Ethiopia’s borders with Eritrea and Sudan, effectively severing the rebels’ supply lines.

And the T.P.L.F. received an unexpected blow when soldiers from Eritrea, Ethiopia’s former enemy, crossed into Tigray to fight alongside Mr. Abiy’s forces. In such conditions, experts say, it’s unclear how long the T.P.L.F. can hold out.

Still, the situation is fluid and unpredictable. Border clashes between Ethiopia and Sudan in recent weeks, over a patch of disputed farmland, could play to the advantage of the T.P.LF. if Sudan helps the rebels to resupply.

And the top military commanders of the T.P.L.F. remain at large. Two Western officials and one with the T.P.L.F., who were not authorized to speak publicly, identified Lt. Gen. Tsadkan Gebretensae, a former head of the Ethiopian military, as a senior rebel leader.

General Tsadkan led Ethiopia into combat against Eritrea during the two countries’ brutal border war between 1998 and 2000. In recent years, after retiring from the army, he ran a small brewery. Now 66, he is back in the fight with the newly formed Tigray Defense Forces, battling the Ethiopian army he once commanded.

One T.P.L.F. stronghold, the Western officials said, is in the Tembien mountains, a cluster of jagged hills and narrow winding roads in central Tigray — part of a highland massif often called the “rooftop of Africa.”

Kjetil Tronvoll, an expert on the T.P.L.F. at Bjorknes University College in Oslo, said the party’s leadership has likely dispersed in small groups, to spread the risk of capture.

It was in Tigray’s central hills near the Tekeze River that Mr. Abiy’s force scored a symbolic coup earlier this month, when they captured Sebhat Nega, an octogenarian founding member of the T.P.L.F.

Ethiopian federal troops crossed tributaries of the Tekeze and hiked up steep hillsides in search of Mr. Sebhat, according to accounts on Ethiopian state television and a former T.P.L.F. official who had been in touch with Mr. Sebhat. After scaling a precipitous slope with ropes, they discovered Mr. Sebhat in a cave with his wife and sister.

Footage broadcast on state media showed a disheveled, white-bearded man in a tracksuit, being led in handcuffs off a military transport plane at Addis Ababa International Airport. Ethiopian leaders were jubilant.

“It was difficult to believe a human could live in the mountain where we found him,” said Maj. Gen. Mesele Meseret, who led the operation.

The triumphal capture of Mr. Sebhat contrasted with the more muted announcement of Mr. Seyoum’s death, which was shrouded in recriminations and conflicting accounts.

The Ethiopian government said Mr. Seyoum, a T.P.L.F. leader, died during a gunfight between his bodyguards and government soldiers. But the T.P.L.F. insisted he had been summarily executed, pointing to a photo circulating online that showed Mr. Seyoum, his eyes closed, with blood streaming from a bullet-sized wound in his forehead.

“Seyoum deserved to end his days in comfortable retirement with all the respect due to a statesman and patriot,” said Alex de Waal, a Horn of Africa scholar at the Fletcher School of Law and Diplomacy at Tufts University, who knew Mr. Seyoum, and called for an international investigation into his death. “His killing should be a red line.”

But Mr. Abiy shows little sign of backing down. On Tuesday, Ethiopia’s election board formally barred the Tigrayan party from elections that Mr. Abiy has set for June 5. Some had hoped the elections might act as a spur to peace talks.

The government accuses Western media of falsely portraying Mr. Abiy as a warmonger. Critics say he is hewing to the traditions of a political culture that prizes dominance.

“Abiy is buying into an old, aggressive warrior tradition in which you vanquish your enemy,” said Mr. Abdi, the analyst. “In countries like Kenya, you weaken your enemy in order to negotiate with him later. In Ethiopia, you obliterate him.”