TOKYO — Japan’s biggest cities are under a state of emergency as coronavirus deaths rise, even while the country tries to convince the world it can safely hold the Summer Olympics. South Korea is prohibiting gatherings of five or more people to keep a recent surge in cases under control. Hong Kong imposed stringent lockdowns on some of its poorest neighborhoods to stop an uptick.

And yet none of these places have begun to carry out the only solution with any hope of putting the pandemic behind them: vaccinations.

While the United States and most nations in Europe as well as the Asian behemoths China and India have begun inoculating their populations, Japan, South Korea and Hong Kong have stood out by proceeding much more slowly.

Japan will not even begin to vaccinate medical workers — those at the front of the line — until the end of February. The same is true in South Korea, and those over 65 will not start receiving inoculations until May. Hong Kong, a semiautonomous territory of China, will begin vaccinating “high risk” groups in the middle of February.

To a certain extent, the three East Asian economic powerhouses have the luxury of time. Despite recent increases in infections, they have not experienced the kinds of outbreaks that have devastated the United States or Britain. The three governments say that they will approve vaccines after standard regulatory reviews and that they are laying the logistical groundwork for a smooth rollout.

“Japan, South Korea and Hong Kong are in the enviable position that their strong application of public health controls and preventions has allowed them to strongly control the disease burden,” said Dr. Krishna Udayakumar, director of the Duke Global Health Innovation Center. “So it’s not vaccination or nothing. The countries that are feeling a more urgent need to accelerate vaccinations are those that are suffering most.”

The delays, which come as more contagious and perhaps deadlier variants of the virus are emerging around the globe, could hamper these governments’ efforts to protect the public and restore normalcy for their weary populations.

But postponement also offers opportunities. The laggards can take the time to learn from the troubled rollouts in the United States and Europe, where supply problems, challenges with refrigeration and debates over who to inoculate first have dogged the vaccine campaigns. 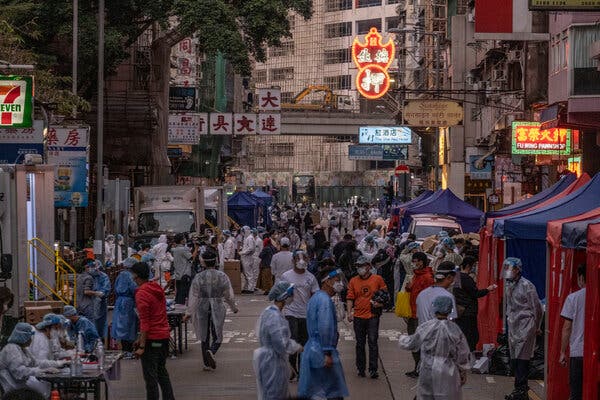 Government workers operating in Jordan, a working-class neighborhood in Hong Kong, on Saturday. The city has imposed lockdowns after an uptick in cases.Credit…Lam Yik Fei for The New York Times

By moving more deliberately, the East Asian governments may also be able to alleviate some concerns among the public about the remarkable speed with which the vaccines have been created. In Japan and South Korea, polls show that many people are reluctant to get vaccinated right away.

“The bottlenecks are really going to be on the demand side,” Dr. Udayakumar said. “Can we actually convince people to accept the vaccine and can we roll out implementation quickly enough to reach herd immunity through vaccinations?”

Supply, too, may restrain the speed of the rollout. While Hong Kong approved Pfizer’s vaccine in January, neither Japan nor South Korea has approved any yet. Both countries have contracts with multiple vaccine makers for enough doses to cover more than their entire populations. Manufacturers are scrambling to fill these orders and many others.

“If vaccines are secured, South Korea will proceed in vaccination quicker than any other countries in the world, and this is what South Korea is good at,” said Kim Woo-joo, an infectious disease specialist at Korea University. “The problem is that it is uncertain and not guaranteed that the vaccines will arrive at the right time.”

In theory, Japan has a more urgent deadline. The government is insisting that it will proceed with the Olympics despite intensifying questions about the feasibility of doing so. The Games, which were originally scheduled for 2020 in Tokyo but postponed to this summer, are scheduled to open on July 23.

In January, Thomas Bach, president of the International Olympic Committee, encouraged athletes, Olympic officials and others likely to travel to Tokyo for the Games “to get vaccinated in their home countries, in line with national immunization guidelines, before they go to Japan.”

But vaccination will not be required, officials have said. In comments about the Olympics before the Japanese Parliament in January, Prime Minister Yoshihide Suga said that “by taking proper measures against infection, we are preparing to hold a safe and secure tournament without having a vaccine as a prerequisite.”

That has spurred worries in Japan that large numbers of unvaccinated people could be arriving this summer. In turn, those traveling to Japan to compete might feel more confident if local residents have been vaccinated in large numbers.

Even as these pressures build, there have been signs that the government is lowering expectations for a speedy distribution schedule. This past week, Taro Kono, a cabinet minister appointed to manage coronavirus vaccinations, said that residents over 65 would not start getting jabs until at least April. Herd immunity would most likely not come until months after the Olympics.

Another major potential complication for the Japanese government is a public that has demonstrated among the highest levels of skepticism about vaccines in the world. Misinformation, fueled by the media, has thwarted earlier campaigns.

After the human papillomavirus vaccine to prevent cervical cancer was introduced in Japan in 2010, local media widely reported that some girls who had been inoculated were suffering from side effects that experts later found had no connection to the vaccine.

Yet memories of those media reports — however vague — still influence public opinion.

Kazuo Inoue, 68, a semiretired consultant in Tokyo, said his attitude was “wait and see.”

“Generally, any new vaccine or new medicines have side effects,” he said. “And we had several cases before. I forgot the name of the vaccine, but it was a vaccine for girls, for HPV, a new one and it had a lot of side effects for many people.”

Waiting in line for a coronavirus test in Seoul in December. Two-thirds of the public in South Korea say they want to “wait and see” before receiving a vaccine.Credit…Heo Ran/Reuters

Erika Yamao, 33, a hairstylist and mother of three young children in Tokyo, said she had been watching midday talk shows where celebrity hosts warned about possible side effects of the vaccines. She said she was disinclined to get a shot when it became available.

“I don’t know how much it can actually protect me,” Ms. Yamao said. “And there are a lot of risks associated with it.”

Government advisers say they will have to tread carefully with public health campaigns promoting the vaccines.

“I think that just asking people to get the vaccine will be a source of more backlash,” said Takashi Nakano, a professor at Kawasaki Medical School and a member of the health ministry’s advisory board on vaccines. “People may think, ‘Why is he suggesting I take the unsafe vaccine along with the government push?’”

In part to assuage domestic concerns, Pfizer, Moderna and AstraZeneca have been conducting small clinical trials in Japan in advance of obtaining regulatory approval for their vaccines. Japan has contracts with the three companies and recently announced plans to manufacture doses of the shot developed by AstraZeneca domestically.

The Olympic rings in Tokyo. The Japanese government is insisting that it will hold the Games, scheduled to open on July 23.Credit…Carl Court/Getty Images

Given the government push to host the Olympics, officials are particularly concerned about tethering an immunization campaign to the success of the Games.

“Vaccination and the Olympics should be separated,” Shunichi Shinkawa, an official in Japan’s Cabinet Secretariat Office for Novel Coronavirus Disease Control, said in an interview. “Vaccination is for the people and to protect human life in Japan.”

Even some athletes are wary. Mei Ichinose, a Paralympic swimmer who is competing for Japan and currently training near Brisbane in Australia, said she had been asked if she feared that the vaccine might affect her performance.

“Performance aside, I don’t know if I feel 100 percent safe to get it as just a human being,” she said. “Vaccines usually take a lot of time to be created,” she added. “But this time, the vaccines were made so quickly, so I worry about their safety.”

In other cases, decisions about whether to take the vaccine may just come down to whether it allows people to do something they really want.

Ms. Yamao, the Tokyo hairdresser, said she would be vaccinated if it meant she could visit her parents in Osaka.

“If I can’t ride the bullet train without the vaccine, then I would consider it,” she said. “It’s a last resort.”

Reporting was contributed by Youmi Kimfrom Seoul, South Korea, Tiffany May from Hong Kong and Makiko Inoue from Tokyo.