For decades, nitrous oxide has been widespread at raves and music festivals, used as a quick buzz. The drug doesn’t have the death toll of the opiate disaster or the widespread popularity of marijuana, but it’s widely sold — legally — all over the country, though its consumption outside medical facilities is illegal in many states.

But the inhalant’s use and misuse seems to be on the rise, fueled by the stress and isolation of the coronavirus pandemic. It’s also in the spotlight this week after the death of Tony Hsieh at 46, the former chief executive of the online shoe empire Zappos, in a house fire in November.

On Tuesday, a report from fire investigators, said that Mr. Hsieh may have been intoxicated when the fire started, noting that he was found in the presence of “several Whip-It brand nitrous oxide chargers” and a “whipping cream dispenser,” along with liquor bottles and marijuana paraphernalia.

In the tech business community, he was remembered as a brilliant business leader who also frequently misused drugs and alcohol. This was not a secret. According to Forbes, one of Mr. Hsieh’s friends, the singer Jewel, sent him a letter last year. “I need to tell you that I don’t think you are well and in your right mind,” she wrote. “I think you are taking too many drugs that cause you to disassociate.”

And while opiates and cannabis do get most of our attention in the drug world, nitrous oxide use is widespread. A British government report in December found that nitrous was second only to cannabis in use among those aged 16 to 24 in Britain. According to the 2019 Global Drug Survey, it is the 10th most popular drug in the world.

In 2018, The Journal of Neurology said nitrous “abuse is rapidly rising” in the United States. A 2020 study linked growth in nitrous use in the Netherlands to an “upsurge in young people presenting to the hospital with neurologic complaints.”

Now, the coronavirus pandemic may be driving its popularity. Dr. Michael McCormick, the medical director of the Healthcare Professionals Program at Caron, a prominent rehab facility, said he had seen an uptick in patients abusing nitrous over the past year.

It makes sense for the current moment. “Some of our patients that we’ve had, they use it to dissociate,” Dr. McCormick said. 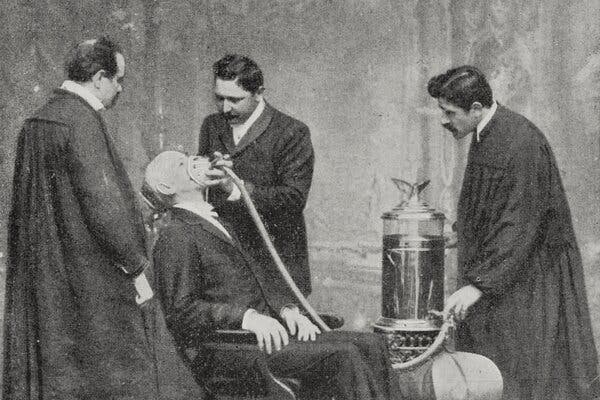 ‘It’s All Funny Until You Go to the Hospital’

Like cannabis, nitrous oxide is responsible for almost none of the overdose or misuse drug deaths each year, but its use can lead to death.

Opiates have been the leading menace in drug deaths for a while, resulting directly in about 48,000 overdose deaths in the United States in 2019 alone. In Britain, just 23 deaths between 2010 and 2016 were attributed to nitrous oxide. The danger of nitrous is more serious for medical workers, who face serious health hazards for overexposure in their workplaces.

Nitrous oxide was first synthesized by the English chemist Joseph Priestley in 1772, and in the late 18th century, it had a brief vogue as a recreational drug. (A group of scientists and artistic types, including the poet Samuel Coleridge, experimented with it at parties.) Its primary medical uses are in dentistry and in childbirth, but its recreational use came back into fashion centuries later; the Grateful Dead were fans, and it made appearances in 1970s Hollywood.

There are “stories of pool parties, people filling inflatables in the pool with nitrous oxide, so you could be just floating on it and huffing on it,” said Mike Jay, the author of “The Atmosphere of Heaven,” a book about theorigins of nitrous.

Decades later, a 2010 Village Voice article chronicled the Nitrous Mafia, a coalition of dealers who sold nitrous-filled balloons from gas tanks at raves and jam-band concerts, using violence to maintain their dominance. Concertgoers would consume so much nitrous they would pass out. (“I’ve watched so many young people crack their heads and faces open that I have personally stopped providing emergency first aid,” an emergency medical technician told The Village Voice.)

Stephen Gilchrist Glover, the former “Jackass” star known as Steve-O, encountered the drug in 1994, while following the Grateful Dead on tour. “It was called hippie crack,” he said. He liked it. Later, he became addicted, he said.

At times he would use hundreds of canisters per day, he said. “In my active nitrous addiction, I would make every effort to inhale only nitrous, like, to the exclusion of even air,” he said. “To lose consciousness wasn’t failure — that was the goal.”

This is not an uncommon sentiment. Some users put plastic bags over their heads while inhaling, a practice linked to multiple deaths. (The Wall Street Journal reported that Mr. Hsieh, for one, used nitrous to deprive himself of oxygen, in order to “figure out what his body could live without.”)

Clubgoers inhale nitrous oxide on the dance floor during the first annual Halloween party at Studio 54 in 1977.Credit…Allan Tannenbaum/Getty Images

Eventually Mr. Glover started experiencing psychosis. “I had tactile hallucinations, visual hallucinations, audio hallucinations” — some of them so strong that “it sounded exactly like I had an earpiece in my ear,” he said. He described voices compelling him to keep consuming the drug.

“I was being instructed to kill myself, and I considered that demon spirits,” he said. He recalled “writhing on the floor, pounding on the floor, trying to not breathe” in between hits of nitrous. “A lot of times I just failed, I’d end up breathing,” he said, and his demons would berate him.

In 2008, Mr. Glover’s addiction to drugs, including nitrous and cocaine, led his “Jackass” castmate Johnny Knoxville to stage an intervention.

He said the scariest part of his experience was the feeling of powerlessness he felt under the drug’s influence. “You are actively killing yourself and can’t stop,” he said.

Another person who struggled with nitrous oxide addiction, Emily, said her doctor told her that her incessant whippet use was the cause of a transient ischemic stroke. (The Times agreed to withhold Emily’s last name because she is applying to graduate school.) She first used nitrous as a drug 10 years ago when she was 16, she said, but it became a habit in April, soon after the pandemic started. In July, she said, she spent more than $5,000 on nitrous, and once used 700 canisters in a single day.

On Halloween, she was hours into a nitrous binge when she looked in the mirror and saw that her face appeared lopsided.

“I couldn’t talk. l was crawling around,” she said. “I was paralyzed.” Still, like Mr. Glover, she felt possessed by a “whippet demon” that was forcing her to keep loading and inhaling canisters.

Whippets, she said, are more dangerous than people realize. She’s seen “friends lose consciousness. You turn blue,” she said. “It’s a very morbid drug.” The diagnosis of her stroke terrified her enough to make her seek treatment, she said.

In 2015, Dr. Emory Brown, a professor of medical engineering at M.I.T. and an anesthesiologist at Massachusetts General Hospital, published a study that found that nitrous also drastically slowed down brain wave oscillations, potentially enough to have an impact on basic respiratory functions if used without proper medical supervision. In an interview, he described someone inhaling nitrous at home as “doing an uncontrolled anaesthetic experiment on themselves,” noting the dramatic effect it has on the brainstem.

“The first time I saw these oscillations, I said to my wife, ‘I understand now why people can die,’” he said.

Mr. Glover also said that nitrous is misunderstood by many as a lighthearted party drug. “‘Hippie crack’ is almost like a term of endearment,” he said, “which is ironic, because it’s such a dark, desperate thing.”

In part because the drug seems fun, nitrous-related content now flourishes on social media. A 22-year-old from Seattle (whom The Times agreed to grant anonymity because of his employment in the tech world) is among the most prominent posters in the TikTok nitrous scene, known as WhipTok; his account has millions of views.

“It’s definitely more, like, relevant now,” he said, noting the appearance of inhalants on the Instagram stories of musicians and people showing off their dispensers online.

He is aware of the drug’s dangers, even as a fan and a proponent. “This one girl duetted me, and was like, ‘Yeah, it’s all funny until you go to the hospital for having a seizure,’” he said.

Spent whippet canisters at a campsite at the Reading Festival in Britain in 2014.Credit…Yui Mok/PA Wire

Mr. Hsieh was a regular attendee of Burning Man, the Nevada festival popular in recent years among the tech elite. It is one of the most prominent events seeking to capture the hippie zeitgeist in recent decades, and nitrous is popular there.

Burning Man forums are full of tips for users, encouraging them to recycle their canisters and avoid throwing them into fires lest they explode. A nitrous oxide supply company called CreamRight even offers Burning Man discounts. In a 2017 essay about Silicon Valley culture published in N+1, the writer Anna Wiener describes a party that “feels like a normal event in the Burning Man off-season —  whippets, face paint, high-design vaporizers.”

Ishaan Chugh, 30, was introduced to nitrous oxide at a Silicon Valley party. The year was 2013, and the tech world get-togethers he attended often featured the substance. A friend first showed him how to do whippets using a whipping cream dispenser.

“It’s a quick high, 15 seconds, you get a buzz and you feel very lifted and positive,” said Mr. Chugh, who was trying to get a tech start-up going at the time. “Versus feeling miserable, which is what you feel when you run a company which is not doing too well.”

A casual whippets habit turned into three years of heavy use of a powerful anaesthetic.

Mr. Chugh thinks the tech world’s utopian ethos makes people susceptible to this drug because it seems to expand the mind. “Lots of Silicon Valley folks are very cerebral in nature,” he said. “Nitrous, in the early days, produces some kind of insight, or the illusion of insight into consciousness.”

Ultimately, though, it leads to delusional belief that the drug “is actually good for you, and that you found something wondrous that the rest of the world doesn’t know about.”

Only after losing his company — and damaging many relationships — did Mr. Chugh seek treatment. He moved back home with his parents in India. “A lot of things that I valued in life were all gone forever,” he said. “That’s when you will realize that no matter how alluring that thing may be, you just got sucked into something really monstrous.”