LONDON — Prime Minister Boris Johnson had been expected to trumpet a rare success in the campaign against the coronavirus on Friday: news that Britain had vaccinated 5.4 million people. By the end of the day, it was overtaken by a tentative finding that a new variant of the virus may be deadlier than the original.

That possibility, raised by preliminary studies relying on small numbers of deaths in hard-hit hospitals, remains far from conclusive. But the prospect that the fast-spreading new variant, already known to be more contagious, could also be more lethal compounded fears that even with the arrival of vaccines, the pandemic will remain a severe threat for some time.

Government scientists said the early evidence suggests that the new variant, first detected late last year in Britain, could raise the risk of death by some 30 percent. But even with such an increase, the great majority of cases are not fatal, and the government estimates included a broad range of possible effects.

“In addition to spreading more quickly,” Mr. Johnson said at a Downing Street news conference, “it also now appears that there is some evidence that the new variant — the variant that was first identified in London and the southeast — may be associated with a higher degree of mortality.”

The underlying evidence, outlined in a report published on Friday by a government scientific committee, was less emphatic than the prime minister, saying only that there was a “realistic possibility” that the new variant was deadlier and outlining a number of inescapable limitations in the data.

“I want to stress that there’s a lot of uncertainty around these numbers and we need more work to get a precise handle on it, but it obviously is a concern that this has an increase in mortality as well as an increase in transmissibility,” said the government’s chief scientific adviser, Sir Patrick Vallance.

For Mr. Johnson, who has struggled to find a silver lining in Britain’s response to the virus, it was not the first time that good news and bad went hand in hand. On Dec. 30, the government announced the authorization of a homegrown vaccine, developed by the University of Oxford and AstraZeneca, only to put much of the country into a stricter lockdown hours later because of a surge in infections.

Britain’s struggle with the pandemic has increasingly become a race between vaccinating the public and confronting mutations in the virus, like the new variant that now accounts for a significant percentage of new cases around the country. It is a pitched battle that scientists say evokes hope as well as anxiety. 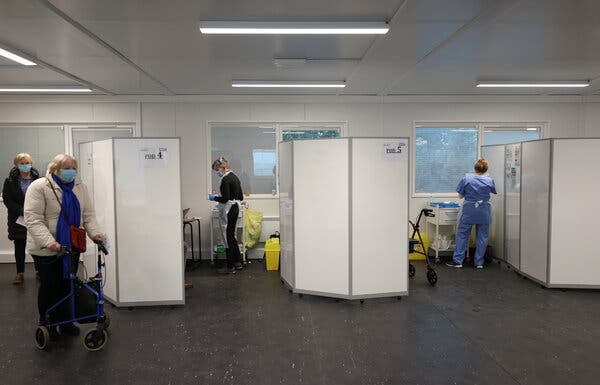 “2021 is going to be a cat-and-mouse game to see if we can vaccinate people quickly enough to stay ahead of the variants,” said Devi Sridhar, director of the global public health program at the University of Edinburgh.

Outside experts said that the early claims of higher mortality were far from resolved.

For one, the studies were based on a small subset — roughly 8 percent — of total deaths in Britain, raising the possibility that the results “may therefore not be representative of the total population,” the report said.

For another, less than 3 percent of known infections in Britain have been fatal, so the new variant’s effect on mortality would have been measured in relatively small numbers, making it harder to pinpoint with certainty.

Moreover, the signs of higher mortality rates were at odds with evidence suggesting that people with the new variant were no more likely to be hospitalized than those infected with better-established ones.

Beyond that, scientists said that any number of confounding factors — like hospitals being overrun or the variant potentially spreading more aggressively in settings like nursing homes — made it difficult to know for certain whether it was, in fact, any deadlier.

Ian Jones, a professor of virology at the University of Reading, noted that the report was “at pains to stress that the data is limited and the conclusions preliminary.” But, he added, “an increased case fatality rate is certainly possible with a virus that has upped its game in transmission.”

Britain’s struggle with the pandemic has increasingly become a race between vaccinating the public and confronting mutations in the virus.Credit…Stefan Rousseau/Press Association, via Associated Press

The scientific studies that the government relied on have not been published in full, and they described a broad range of possible effects of the new variant on mortality rates.

The report stressed that “the absolute risk of death per infection remains low.” And whatever the fatality rate, scientists said the best answer to the new variant had not changed: lockdowns, face coverings and vaccines.

Britain had injected more than 400,000 people in the previous 24 hours, keeping it on track to achieve Mr. Johnson’s goal of inoculating 15 million vulnerable people, almost a quarter of the population, by mid-February. On a per-capita basis, only Israel, the United Arab Emirates and Bahrain have done more. The United States and China have delivered more doses than Britain but to a smaller percentage of their populations.

Mr. Vallance said there was no evidence that the vaccines being deployed were not effective against the variant first identified in Britain. But he expressed less certainty about whether they offered similar protection against variants that originated in South Africa and Brazil.

The warnings about the variant captured the political crosswinds that Mr. Johnson has faced in responding to the pandemic. The rapid vaccine rollout will likely embolden members of his Conservative Party to renew their calls on him to begin easing the lockdown. But scientists warn that a full-scale easing of restrictions, even after widespread vaccinations, could ignite a fresh surge of infections.

The opposition Labour Party, meanwhile, criticized Mr. Johnson for springing yet another unwelcome surprise on the British public.

“This is deeply alarming news, not least because Boris Johnson assured the nation back in December there was no evidence the variant was more dangerous,” Jonathan Ashworth, the Labour Party’s shadow health secretary, said in statement.

Mr. Johnson presented the news as evidence of his commitment to present changing scientific evidence to the public. He also pleaded for people to stick to social distancing rules even as the vaccines promised a brighter future.

The warnings about the variant — first disclosed by a prominent epidemiologist, Neil Ferguson, in a statement on Friday to a well-connected television correspondent, Robert Peston — gave the prime minister grist for that cautionary message.

“We really can’t begin considering unlocking until we’re confident the vaccination program is working,” Mr. Johnson said. “We’ve got to get those rates of infection down.”