NEW DELHI — Indian and Chinese troops have clashed along their disputed Himalayan border, according to media and military reports on Monday, as Beijing quietly intensifies pressure against its southern neighbor with new incursions into territory claimed by both sides.

Details about the latest skirmish remain foggy, and Indian officials played down the events. Indian media outlets and independent military analysts said that the clash happened several days ago and that soldiers on both sides were wounded, although no fatalities were reported.

The Indian Army has said only that a “minor face-off” occurred last week in northern Sikkim, a mountainous Indian state bordering China.

The face-off was “resolved by local commanders as per established protocols,” an Indian Army statement read, without explaining how the face-off occurred or whether anyone was injured.

Chinese officials were even more tight-lipped. At a regularly scheduled news conference on Monday, Zhao Lijian, a spokesman for the Chinese Foreign Ministry, emphasized that the two sides were holding military talks. Hu Xijin, the editor of Global Times, a nationalist tabloid controlled by the Communist Party, called the reports “fake news” and said that small frictions occur often.

Though details were scant, reports of a clash show that tensions are still simmering between the two Asian giants, which fought a war in 1962 and have been eyeing each other warily across their unresolved frontier ever since. Tensions burst into the open in June, when troops from both countries engaged in a deadly brawl along the border of the Ladakh region in northern India.

No shots were fired in that battle, stemming from a tacit understanding that neither side along the tense Himalayan border should use firearms. Still, the deaths of more than 20 Indian soldiers and an unknown number of Chinese troops exposed the increasing aggressiveness of both countries, which are governed by nationalist leaders with little political incentive to back down. As many as 100,000 troops from the Indian and Chinese armies are now facing off across inhospitable mountain passes in subzero temperatures in the Ladakh region alone, military experts estimate.

Since the summer, both sides have tried to ease tensions. But in India, the government of Prime Minister Narendra Modi is contending with reports that China is far from done encroaching on disputed borderlands.

This month, NDTV, an Indian news channel, revealed that China had created a new village on territory that India claims in another mountainous border state, Arunachal Pradesh. Satellite imagery shows neat rows of dozens of new homes that have been built on what had been an empty hillside two years ago. 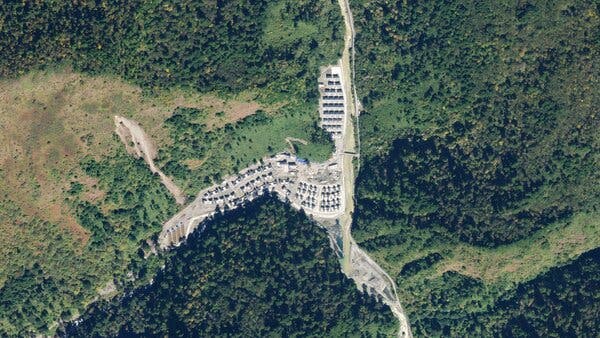 An Indian news outlet used satellite images taken in November to show a newly constructed Chinese village in an area claimed by both countries.Credit…Planet Labs, via Agence France-Presse — Getty Images

The NDTV report of new structures built in the harsh mountainous area is difficult to independently verify. Two Indian government officials in Arunachal said that the Chinese had recently built villages in disputed areas along the border in places that used to have just a few remote military posts.

“Where the army had been living, some civilians also started living there,” said D.J. Borah, a senior district official based in that area.

When asked about the new village, officials at the Indian Foreign Ministry referred back to a statement given to NDTV in which the ministry said that it was aware of the recent report and that “China has undertaken such infrastructure construction activity in the past several years.”

Leaders of India’s main opposition party have criticized Mr. Modi for staying silent on the matter. “China is expanding its occupation into Indian territory,” Rahul Gandhi, the leader of the party, Indian National Congress, said on Twitter.

Chinese officials, for their part, don’t deny that there are new villages in the area. But they say that area is in China.

“China’s normal construction on its own territory is entirely a matter of sovereignty,” Hua Chunying, a spokeswoman for the Chinese Foreign Minister, said this month.

Local leaders in Arunachal Pradesh interviewed by The New York Times said that the Chinese forces have been slowly but steadily cutting away small pieces of Indian territory, much like the strategy China has shown in the South China Sea and along its border with Bhutan. Military analysts call this salami slicing.

“Longju used to be our land,” said Chatung Mra, a bank manager, using the local name for the general area where the Chinese village now stands. “Our forefathers used to live there.”

The area in question is in the foothills of the Himalayas and more than 1,500 miles from New Delhi, the capital. Official Indian maps showed that the Longju area lies several miles inside India, said the local leaders who have visited near the disputed area. But China, they said, has effectively controlled it since 1959.

In recent years, they said, China has engaged in a flurry of construction projects along the border and rendered areas that used to be accessible to people on the Indian side now inaccessible.

The Chinese infrastructure campaign, the local leaders said, far outpaced what India has been doing and has been effective in absorbing disputed areas into China.

“Our place used to be up to five or six kilometers beyond Longju,” said Tungpo Mra, a leader of the Mra, a local ethnic group. “Now all that is in China’s control.”

Taro Bamina, the general secretary of an Arunachal youth group, was especially frustrated and helped organize a protest last week that included hundreds of demonstrators in Daporijo, an Arunachal market town.

“This is our motherland,” Mr. Bamina said. “We wanted to tell the government of India. ‘Why didn’t you take care of that?’’’

What local leaders are reporting in Arunachal is similar to what local leaders in Ladakh have reported more than 2,000 miles away. In the past few years, according to Ladakh leaders, China has stepped up construction projects along the frontier with India, which zigs and zags through high mountain passes and has never been marked. The result is that China can move troops — and civilians — to the borderlands much faster than India.

Chinese and Indian military commanders continue to hold talks along the disputed border in the Ladakh region. In the meantime, Ladakhi herders have complained that they have had to chase away Chinese vehicles that brazenly crossed into India.

Indian soldiers leaving a military transport plane at a base in the Ladakh region in September. Credit…Danish Siddiqui/Reuters

Sushant Singh, a senior fellow at the Center for Policy Research in New Delhi and an Indian Army veteran, said the latest clash in Sikkim, an area where India had expected to have a strategic advantage because it has more troops, suggested that tensions would rise as the ground thaws.

“If you see it in light of everything going on,” Mr. Singh said, “it means that, the coming summer, we are looking at a very tense situation.”