In late December, scientists in California began searching coronavirus samples for a fast-spreading new variant that had just been identified in Britain.

They found it, though in relatively few samples. But in the process, the scientists made another unwelcome discovery: California had produced a variant of its own.

That mutant, which belongs to a lineage known as CAL.20C, seemed to have popped up in July but lay low till November. Then it began to quickly spread.

CAL.20C accounted for more than half of the virus genome samples collected in Los Angeles laboratories on Jan. 13, according to a new study that has not yet been published.

“We had our own problem that didn’t cross over from Europe,” said Jasmine Plummer, a research scientist at Cedars-Sinai Medical Center in Los Angeles, who worked on the new study. “It really originated here, and it had the chance to start to emerge and surge over the holiday.”

There’s no evidence that CAL.20C is more lethal than other variants. And scientists have to conduct more research to determine whether CAL.20C is in fact more contagious than other forms of the virus.

But Eric Vail, the director of molecular pathology at Cedars-Sinai, said it was possible that CAL.20C is playing a large part in the surge of cases that has overwhelmed Southern California’s hospitals. “I’m decently confident that this is a more infectious strain of the virus,” Dr. Vail said.

Dr. Charles Chiu, a virologist at the University of California, San Francisco, said that across the state, he and his colleagues are finding the variant in roughly 20 percent to 30 percent of samples being sequenced. “It just popped up under our noses, and now it’s rising in multiple counties,” he said. “On the whole, it’s safe to say it’s going to spread outside of California.”

Researchers are also looking in other states for CAL.20C, Dr. Plummer said, and have so far found it in Arizona, Connecticut, Maryland, New Mexico, Nevada, New York, Texas, Utah, Washington and Wyoming, as well as the District of Columbia. It’s not clear yet how common it is outside of California.

Last week the Centers for Disease Control and Prevention put out a formal warning about the variant swamping Britain. Although that mutant, called B.1.1.7, is still relatively rare in the United States, accounting for less than one-half percent of infections, the agency said it could be responsible for the majority of the nation’s cases by March.

An agency spokesman said that the C.D.C. is working with California to learn more about the new variant. “Currently, it’s not known whether this variant is any different from other SARS-CoV-2 viruses, whether those differences may have contributed to its emergence, or whether this emergence was merely a random event,” he said.

“I’ll say this particular variant is one to watch,” said Kristian Andersen, a virologist at Scripps Research Institute who discovered one of the first samples of B.1.1.7 in the United States. But he cautioned that it’s still unclear whether CAL.C20 is getting more common because it has some biological advantage, or just by chance.

If both B.1.1.7 and CAL.C20 are both more contagious that other variants, it’s not clear how a competition between the two of them will sort out. “CAL.C20 has a big head start,” Dr. Vail said. “Even if B.1.1.7 is more infective overall, we may never see a big surge from it here in L.A.” 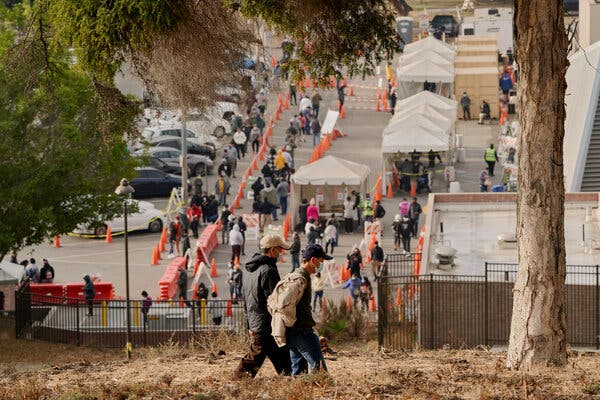 Ever since scientists first identified the new coronavirus a year ago in China, they’ve been tracking the emergence of new mutations, which arise at random and get passed down to new generations of viruses as they replicate in our bodies.

Many mutations are harmful to the virus and make it worse at replicating. Many others are neutral. But researchers have now discovered several that are worrisome because they seem to help the virus infect people more efficiently.

In the early months of the pandemic, a mutation arose in a lineage that then became dominant across much of the world. Known as D614G, the mutation is now believed to make the virus more easily transmitted from person to person, compared with variants without it.

In December, researchers in Britain found B.1.1.7, which is about 50 percent more transmissible than previous versions of the virus. The variant is a driving factor in the surge of cases and hospitalizations there now.

B.1.1.7 was in the United States in early November, according to a study posted online Tuesday by University of Arizona biologists Brendan Larsen and Michael Worobey. That would mean the variant had been circulating for two months before being detected.

In California, researchers looking for B.1.1.7 began noticing an unusual mutation in their samples. The mutation, called L452R, alters the shape of a protein, called spike, which decorates the surface of the coronavirus.

“We stumbled on this really unexpected finding and went with it from there,” Dr. Vail said.

The mutation has popped up in different viral lineages over the past year. Scientists have studied L452R because it might help coronaviruses stick to our cells and infect them.

In California, Dr. Vail, Dr. Plummer and their colleagues found that whenever they came across a variant with the L452 mutation, it also carried four other distinctive mutations. That combination, they said, indicated that they were dealing with a single lineage that had emerged at some point in California. The researchers named any virus carrying all five mutations CAL.C20.

The California Department of Health held a news conference Sunday night to announce that the L452 mutation was becoming more common in California. On Monday night, Cedars-Sinai issued a news release about its study, which will soon be posted on the preprint website MedRxiv.

The Cedars-Sinai team is part of a statewide network of researchers who have been tracking mutations in the coronavirus. They randomly selected nasal swabs from patients who tested positive for Covid-19, and then collected genetic material from the swabs.

The researchers pieced the fragments together to reconstruct the virus’s entire genome, and then looked for distinctive mutations. They then compared their own findings to other viral genomes sequenced across the state and country.

The researchers found the earliest sample of CAL.C20 in July in Los Angeles. They couldn’t find another sample until October. The variant became more common in November, reaching 36 percent of the samples from Cedars-Sinai in December and 50 percent last week.

An overflow tent hospital was set up behind the Union Rescue Mission shelter on Skid Row in Los Angeles.Credit…Alex Welsh for The New York Times

Outside scientists are concerned about the new findings, but say it’s still unclear whether the California variant’s mutations are giving it an edge — or whether it’s showing up so much just by chance.

There might be a bias in the samples that scientists are looking at, for example. It’s also possible that CAL.C20 happened to become more common thanks to some big super-spreader events.

“I think we need to be careful before concluding that any particular lineage is spreading due to a transmission advantage rather than because it happened to ride a wave caused by human behaviors,” said Dr. Worobey.

If it does turn out to be more contagious, Dr. Plummer said, then CAL.C20 may turn out to be partly responsible for the recent crippling surge of cases in Southern California’s hospitals.

As the total number of cases increased, Dr. Plummer and her colleague found, the percentage of CAL.C20 also went up. That would be consistent with the idea that this is a more contagious variant. “I mean, the numbers speak for themselves,” she said.

Dr. Chiu also noted that the variant was involved in a number of outbreaks where large numbers of people got infected. “There are worrisome signs that this variant may be highly transmissible,” he said.

Dr. Chiu and his colleagues are now growing the variant in cells to see how quickly they multiply compared with other variants. The researchers are also going to observe how well antibodies produced by vaccines work against CAL.C20.

Other scientists are also looking more closely at the rise in frequency of the variant in California. They’re searching for evidence that could determine whether biology or chance is to blame for its rise.

“That’s the work that needs to be done,” said Dr. Vail. “We just don’t have that information.”