KATHMANDU, Nepal — The pictures seemed to show them at the top of the world, the summit of Mount Everest, and tourism officials in Nepal presented the two climbers with coveted certificates stating they had reached the world’s highest peak.

But veteran mountaineers said they saw a lie in the photographic details: An oxygen mask with no tube connecting it to an oxygen tank, no reflections of snow or mountains in a man’s sunglasses and limp flags in a place known for lacerating winds. The pictures were faked, they said, and so was the climb.

Now, the authorities in Nepal are seeking to ban the two Indian mountaineers who submitted the photographs from climbing Mount Everest and other Nepalese peaks for 10 years, after a government investigation concluded that they had doctored the images showing they had made it to the summit when in fact they had not.

The climbers, Narender Singh Yadav and Seema Rani Goswami, claimed they had reached the top of the mountain in 2016, though at the time local Sherpas and others questioned that.

Still tourism officials in Nepal presented them with the Everest certificates after the two climbers submitted photographs the Nepalese government now says were faked.

Mr. Yadav and Ms. Goswami, who were not especially well known before this controversy, come from a northern Indian state, Haryana, that has rewarded successful climbers in the past.

“Their claims for Everest summit couldn’t be established,” said Pradip Kumar Koirala, a Nepalese tourism official, on Monday. Mr. Koirala, who led the investigation of the duo, which began in August, added, “We have recommended action against them.”

Mr. Yadav said in an interview that he has all the proof required to show he reached the top of the mountain. He has filed a police complaint against his guide in Nepal, who he said was misleading people by denying that he had scaled the peak. Ms. Goswami did not respond to questions posed by The New York Times.

Nepal, one of Asia’s poorest nations and the site of most Everest climbs, has been struggling to root out bogus summiteers. But, in the past few years, the numbers of people faking Everest claims has sharply increased, from a few a decade ago to dozens every year.

Investigations have been rare in Nepal, a country hungry for every climbing dollar it can get. It has issued more and more Everest permits in recent years, leading sometimes to climbers pushing and shoving each other and creating a dangerous human traffic jam on the roof of the world.

For climbing the world’s highest mountain, people in India are often given national awards. If they are already working for the government, they are sometimes given promotions and lifelong benefits. Expedition organizers say the flow of climbers from India has increased in recent years as the perks have became better known.

But it was the prospect of that kind of recognition that undid the claim of Mr. Yadav and Ms. Goswami.

In August, Mr. Yadav was selected as one of recipients of the prestigious Indian mountaineering award. But Indian mountaineers and Sherpas who said they had seen Mr. Yadav descending to Everest Base Camp without reaching the summit started posting comments online questioning the government’s intention.

The Indian government decided to withhold the award pending an investigation. India’s sports ministry, which confers the award, said it was looking into claims that Mr. Yadav had doctored photos and sought clarification form Nepalese tourism officials.

The Nepalese government was forced to open an investigation. Veteran climbers and many mountaineers questioned Mr. Yadav’s climbing credentials and challenged details in his pictures.

“I don’t know how he got certificate without any photos of the summit,” Mr. Phukon said. The company that organized the duo’s trip said it had “no role at all in morphing the photos.”

Nepal’s most severe penalty for fake claims is to ban climbers from all of the country’s mountains. It does not impose fines on them.

Such claims have become a recurring problem. In 2016, two Indian police officers, a husband and wife team, were fired from their jobs after an inquiry found they had faked their Everest climb. The Indian couple said they had achieved a lifelong goal of reaching the summit, but Nepalese authorities later said the climbers had doctored photographs that appeared to show a successful climb.

In 2019, the tourism ministry in Nepal removed at least five names from its list of Everest summiteers after questions were raised about their climbs. The investigation into those accusations is still underway. 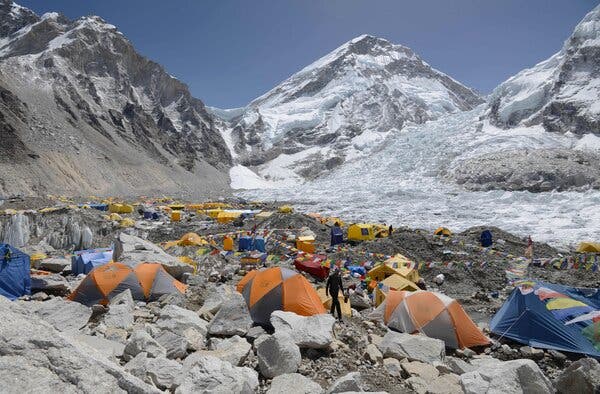 The Everest base camp in 2018.Credit…Prakash Mathema/Agence France-Presse, via Getty Images

Climbers in India welcomed Nepal’s steps against Mr. Yadav and Ms. Goswami. “This will discourage fakers,” said Satyarup Siddhanta, an Indian mountaineer. “If the Nepal government develops a web portal and posts all summit pictures that will help to detect fakers.”

Nepalese authorities said their investigation found that Mr. Yadav and Ms. Goswami had reached an elevation of more than 27,000 feet, about 2,000 feet short of the summit. That height is known as the “death zone,” where the air is so thin that even with bottled oxygen, the brain and body begin to fail.

Their guide warned them that their oxygen supply was depleted and that they were not physically fit enough to reach the summit, and they were rescued, the investigation found. Lakpa Sherpa, a rescuer who was part of the operation, said both Mr. Yadav and Ms. Goswami were running out of supplemental oxygen and their condition was worsening fast.