MOSCOW — Supporters of Aleksei A. Navalny say that momentum is on their side after a showdown with the Kremlin over the last three weeks — even after a court sentenced the Russian opposition leader to more than two years in prison.

But at the same time, opposition activists also know that their fight could take years and will require patience and persistence.

Mr. Navalny, who has long been the loudest critic of President Vladimir V. Putin, was ordered on Tuesday to serve two years and eight months in a penal colony for violating his parole in a 2014 case. In August, Western officials say, Russian agents tried to assassinate Mr. Navalny by poisoning him with the nerve agent Novichok.

After recovering in Germany, Mr. Navalny returned home and over the past few weeks inspired some of the biggest antigovernment protests of the Putin era. Mr. Navalny’s return despite the threat of imprisonment raised his profile nationwide, and his sentencing was a pivotal moment that looks likely to further rally opposition to the Russian leader.

The Navalny team’s strategy is to build its reach and visibility while chipping away at Mr. Putin’s legitimacy through corruption investigations and election campaigns against the Kremlin. His allies say they will also call for more street protests.

“Our strategy is to be the best-organized political force when things start to change,” Vladimir Ashurkov, one of Mr. Navalny’s top allies, said in a telephone interview from London. “We don’t know when that will happen.”

He said he had discussed plans with Mr. Navalny to call for sanctions against Russian officials, state media figures and business tycoons close to Mr. Putin — which Mr. Ashurkov did in a letter to President Biden last week.

“We have a plan for how we are going to organize our work and how we will constantly pressure the authorities for his release,” Mr. Ashurkov said of Mr. Navalny. 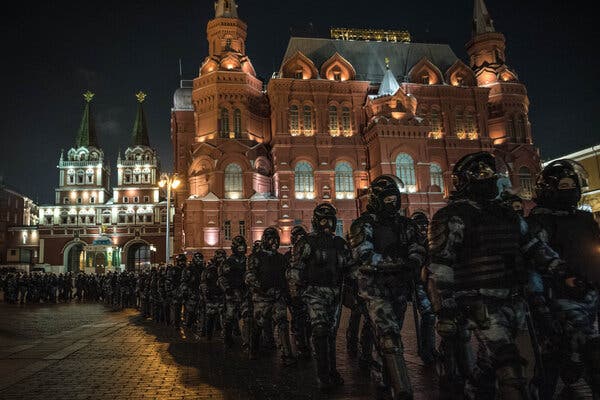 Hundreds of riot police officers descended on Moscow’s city center even before Mr. Navalny’s sentencing was announced.Credit…Sergey Ponomarev for The New York Times

Mr. Navalny has repeatedly embarrassed Mr. Putin and his allies with investigative reports about corruption that were viewed many millions of times on YouTube. The authorities previously tried to contain Mr. Navalny with jail terms of a few weeks to avoid turning him into a political martyr.

“We are entering a new period of instability and uncertainty,” Mr. Ashurkov said. “But no one knows how close we are to the period we are preparing for — when liberalization begins.”

On Wednesday, the streets of Moscow and St. Petersburg resounded with sirens, chants of protesters and screams. On social media and in independent news outlets, Russians voiced outrage over harrowing scenes of police violence overnight.

After the sentencing, police officers were filmed swinging batons at pro-Navalny protesters who had their hands up, clubbing a journalist twice on the head and dragging people out of passing cars.

The authorities have made more than 10,000 arrests in the past few weeks, according to OVD-Info, an activist group that tracks detentions at protests.

The harsh tactics against protesters by a large deployment of riot police officers, and the uncompromising stance of top Russian officials and the state media in depicting Mr. Navalny and his supporters as criminals, signaled that the Kremlin had shifted to a tougher line against domestic dissent.

But there was no sign that the Kremlin would change course.

“There must not be any unsanctioned protest activity,” Mr. Putin’s spokesman, Dmitri S. Peskov, told reporters on Wednesday. “Unsanctioned protests are cause for concern, confirming that the police are justified in their tough, legal actions.”

The authorities have made more than 10,000 arrest in the past few weeks, according to OVD-Info, a group that tracks detentions at protests. Credit…Sergey Ponomarev for The New York Times

Others in the movement acknowledged that there is a long struggle ahead.

Mr. Ashurkov, the top Navalny ally, said his team had long understood that Russia’s pro-democracy groups were too weak to force political change on their own timetable. But he said they were confident that change would come, with dissatisfaction building in the general public and among the elite.

The authorities have made it clear that they will respond with strength. At least 1,408 protesters were detained on Tuesday, including about 1,145 in Moscow, according to OVD-Info.

In what appeared to be a carefully choreographed operation, hundreds of riot police officers fanned out across Moscow’s posh city center even before Mr. Navalny’s sentencing was announced and the opposition leader’s team called for protests. The police prevented a large crowd from forming and trapped protesters in courtyards and alleyways before marching them into buses to take them away.

Tatiana Stanovaya, a nonresident scholar at the Carnegie Moscow Center, described in a commentary the crackdown as the mark of a new phase in the Kremlin’s treatment of the anti-Putin opposition.

In years past, the Kremlin’s goal was to delegitimize the opposition in the eyes of the public and keep it out of official politics. Now, she said, it is being criminalized and cast as a national security threat.

At the same time, Mr. Putin’s critics are for the first time uniting around a single figure — Mr. Navalny.

“A time of great confrontation has arrived,” Ms. Stanovaya wrote.