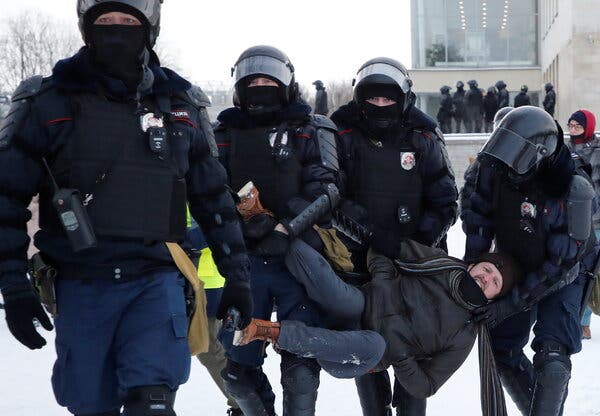 An arrest at a rally in St. Petersburg, Russia, on Sunday in support of the jailed opposition leader Aleksei A. Navalny. Protests across the country met with an overwhelming show of force from the police.Credit…Anton Vaganov/Reuters

Braving bitter cold and the threat of arrest, Russians rally in cities across the nation.

MOSCOW — Thousands of protesters across Russia took to the streets on Sunday for a second consecutive week to rally for the jailed opposition leader Aleksei A. Navalny, and they were met by one of the most imposing shows of police force seen in the country’s recent history.

In Moscow, the police ordered seven subway stations around the Kremlin to close on Sunday and said pedestrian access would be limited in the center of the city — an unheard-of move in recent years disrupting the core of a metropolis of 13 million people.

Police officers were asking cafe owners to turn off their Wi-Fi, the Interfax news agency reported, a sign that the government was preparing to limit mobile internet access later in the day.

As they did one week ago, the protests started in Russia’s Far East and swept across the vast nation of 11 time zones, with demonstrations scheduled for noon in cities and small towns alike.

Less than an hour before the protests in Moscow and St. Petersburg were scheduled to start, the protest organizers announced new starting points to try to avoid police cordons in those cities.

In the Siberian city of Novosibirsk, thousands of people packed the sidewalks of central streets. In the Pacific port city of Vladivostok, demonstrators were forced onto the ice of a frozen bay, with riot police officers in pursuit. And in Chelyabinsk in the Ural Mountains region, there was footage of riot police officers clubbing protesters with batons.

The defiant turnout in so many parts of the nation showed that the accumulated anger with President Vladimir V. Putin remains a potent force, even with Mr. Navalny and most of his main allies across the country now in jail.

Mr. Navalny, a 44-year-old anticorruption activist, fell into a coma after a poisoning in Siberia last summer, recovered in Germany, flew home to Moscow two weeks ago and was arrested at passport control.

At a court hearing on Tuesday, he could receive several years in prison over parole violations stemming from a 2014 embezzlement case that Europe’s top human rights court called politically motivated.

Mr. Navalny’s backers say only the pressure of street protests can force the Kremlin to release the opposition leader, along with the dozens of his associates and supporters across the country who are being threatened with prosecution. The Russian government has called the protests in his support illegal, threatening anyone who participates with jail time.

Police officers chase protesters across a frozen bay, one of many remarkable scenes.

A protester being arrested in Vladivostok on Sunday.Credit…Pavel Korolyov/Agence France-Presse — Getty Images

In the frozen port city of Vladivostok, a seven-day train ride from Moscow on the Sea of Japan, the police moved swiftly to try to block protesters from converging in the city center.

They erected barricades and closed underpasses. So the protesters took to the ice covering Amur Bay.

Clasping hands, they formed chains as they chanted “Putin is a thief!” and “Russia will be free!”

Their movements on the ice, captured on social media, looked almost like a dance.

Riot police officers, initially hesitant to follow on the frozen waters, decided to give chase. But it played out in seeming slow motion, with each side moving gingerly on the snow-covered expanse of ice under a gray late-afternoon sky.

It was just one of many remarkable scenes that played out on Sunday in eastern Russia, where large-scale protests are rare.

Although the crowd in Vladivostok was significantly smaller than one week ago, according to a local journalist, the police were taking no chances.

At least 96 people were detained, according to OVD-Info, an activist group that tracks arrests at protests.

“People were disappointed that there weren’t as many people and that there wasn’t as much activity as last Saturday,” the local journalist, Tatyana Menshikova, said by phone.

In the Siberian city of Irkutsk, where temperatures approached minus 20 Fahrenheit (minus 29 Celsius), the turnout was also significantly smaller than the thousands who protested last weekend — and the police presence even more imposing.

Aleksei Zhemchuzhnikov, a civic activist, said chains of riot police officers with full body armor and shields were deployed for the first time, cordoning off sections of the city center. Mobile internet access was cut off, he said.

“For Irkutsk, this was a first,” Mr. Zhemchuzhnikov said of the police response. “They were scared.”

An overwhelming show of force ahead of planned demonstrations.

The police blocked streets in St. Petersburg on Sunday before the protest there was scheduled to start.Credit…Anatoly Maltsev/EPA, via Shutterstock

Even before Russians gathered for a second week of protests, the Kremlin made it clear that any demonstrations would be met with an even greater show of force.

The huge scale of the nationwide operation of recent weeks to defuse the anger that Mr. Navalny sparked has revealed the anxiety in the Kremlin.

Images and video footage from across the country showed lines of hundreds of riot police officers deployed to prevent Mr. Navalny’s supporters from being able to gather in one place. In the Siberian city of Krasnoyarsk, the authorities dumped snow onto two central squares to make them impassable for pedestrians.

At the protests last weekend, which took place in more than 100 cities, some 4,000 people were arrested, according to an activist group. Many were later released, but some received jail terms for violating public-gathering laws and others have been threatened with criminal prosecution for alleged violence.

When the police came to detain Anastasia Vasilyeva, a physician who leads a pro-Navalny group called the Alliance of Doctors, she used the piano as her method of defiance.

Some of Mr. Navalny’s close allies have also been detained in recent days, including his brother, Oleg Navalny, and Maria Alyokhina, of the punk band Pussy Riot. They were both placed under house arrest.

Navalny’s return to Russia and the subsequent protests have transformed the political landscape.

For years, the Kremlin tried to ignore the opposition leader Aleksei A. Navalny, right down to avoiding the very mention of his name.

But since the first wave of protests last week, Russian officials have drastically reversed course.

President Vladimir V. Putin’s spokesman appeared on a prime-time show on state television and denied Mr. Navalny’s assertion that Mr. Putin had a secret palace on the Black Sea. On another marquee program, the host devoted 40 minutes to Mr. Navalny, who was described as engaging in “political pedophilia.” The evening newscast showed tweets by Western officials in support of Mr. Navalny as proof that he was working against Russian interests.

And on Saturday, Russia’s state television channels aired an interview with a billionaire friend of Mr. Putin, Arkady Rotenberg, in which the business magnate claimed that the “palace” actually belongs to him.

“We want to build an apartment hotel there,” Mr. Rotenberg said.

The tightly scripted, all-hands attack on Mr. Navalny underlined how the opposition leader’s dramatic return to Russia on Jan. 17 and his arrest have changed the landscape of Russian politics.

Mr. Putin remains in firm control of the levers of power. But Russians unhappy with their president — long a weak, diverse and atomized group — suddenly have a clear leader around whom to rally, and the government appears unsure about how to fight back.