MOSCOW — The Russian opposition leader Aleksei A. Navalny faced a court hearing on Monday at a police station near the airport where he was arrested the previous evening, an extraordinary move by the Russian authorities.

Mr. Navalny’s lawyer was notified Monday afternoon that his client would, within minutes, receive a court hearing to consider whether he would remain in jail. According to a letter posted online by the lawyer, Vadim Kobzev, the hearing would take place not in a courtroom but at the police station in Khimki, the city outside Moscow where Mr. Navalny was being held.

Russia’s judicial system is not independent, but it usually aims to preserve the veneer of procedural impartiality in cases against opposition figures. On Monday, however, the authorities seemed to be doing all they could to keep Mr. Navalny’s supporters off balance by processing his case at breakneck speed.

Photographs posted by Mr. Kobzev showed a makeshift courtroom at the police station, with a simple table and a microphone set up in front of a bulletin board. A video posted to Mr. Navalny’s Telegram account showed a judge in a black robe sitting in front of the bulletin board. Mr. Navalny said he had been led into the room a minute earlier from his jail cell.

“What is happening here is impossible,” Mr. Navalny said in the video. “This is the highest degree of lawlessness — I can’t call it anything else.”

Mr. Navalny had spent the night at the police station — near Sheremetyevo Airport, Moscow’s main international hub, where Mr. Navalny was detained at passport control Sunday evening — without being given access to his lawyer. Mr. Kobzev was not allowed into the police station until Monday morning.

“It seems that the grandpa in the bunker is so afraid of everything that they demonstratively ripped apart the code of criminal procedure and threw it in the trash,” Mr. Navalny said, using one of his epithets for President Vladimir V. Putin.

Most journalists gathered outside the police station were not being let in, but at least three pro-Kremlin news outlets were allowed to enter through a back door.

“I demand that this procedure by as open as possible so that all media outlets have the possibility to observe the incredible absurdity of what is happening here,” Mr. Navalny told the judge, according to another video posted by his spokeswoman.

Mr. Navalny was detained minutes after he arrived in Russia for the first time since August, when he was airlifted to Berlin in a coma after a near-deadly nerve agent attack. Russia’s prison service said he had violated the terms of a six-year-old suspended sentence while he was recuperating in Germany.

“What an enormous embarrassment for the whole judicial system,” Ivan Zhdanov, the director of Mr. Navalny’s Anti-Corruption Foundation, posted on Twitter. “This is simply something incredible.”

Germany and the European Union on Monday joined the international chorus calling for Mr. Navalny’s release. But Sergei V. Lavrov, the Russian foreign minister, insisted that the Kremlin had no intention of changing course under pressure.

“Of course we need to think about our image, but we are not a lady coming out to a ball,” Mr. Lavrov said in his annual news conference, responding to a question about what Mr. Navalny’s detention meant for Russia on the international stage. “The Navalny case has taken on a foreign policy significance that is artificial and, I would say, totally unjustified.”

But the move to detain Mr. Navalny was seen around the world and by many Russians as a flagrant attempt by Mr. Putin to suppress the popular discontent bubbling up in the country.

“The Russian authorities must immediately release him and ensure his safety,” Ursula von der Leyen, the president of the European Commission, the European Union’s executive branch, said in a statement. “Detention of political opponents is against Russia’s international commitments.”

Germany’s foreign minister, Heiko Maas, said in a Twitter post that Mr. Navalny’s detention was “totally incomprehensible” and called on Russia to respect the rule of law. In the United States, both the outgoing and incoming administrations called for Mr. Navalny’s release, with Secretary of State Mike Pompeo writing that “confident political leaders do not fear competing voices.”

Mr. Lavrov, however, said that Western officials simply saw the case as a welcome distraction from their own problems.

“We are seeing how they’ve grabbed onto yesterday’s news about Navalny’s return to Russia — one can really feel how happily they’re commenting on it,” Mr. Lavrov said. “They are happy because it lets Western politicians think that they can thus distract attention from the global crisis in which the liberal model of development has ended up.” 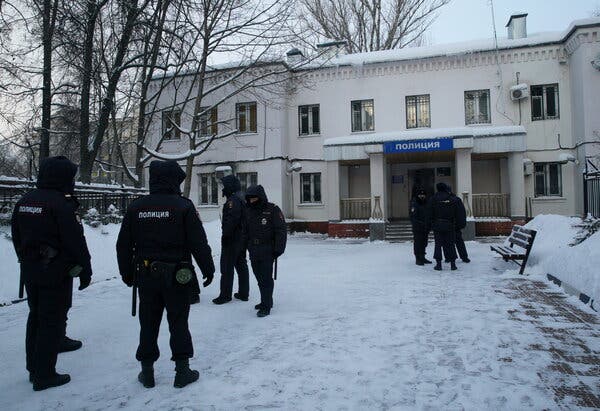 The police station in Khimki, where Mr. Navalny was being held on Monday.Credit…Tatyana Makeyeva/Reuters