The military of Myanmar overthrew the country’s fragile democratic government in a coup d’état on Monday, arresting civilian leaders, shutting off the internet, and cutting off flights.

The coup returns the country to full military rule after a short experiment in quasi-democracy that began in 2011, when the military, which had been in power since 1962, implemented parliamentary elections and other reforms. 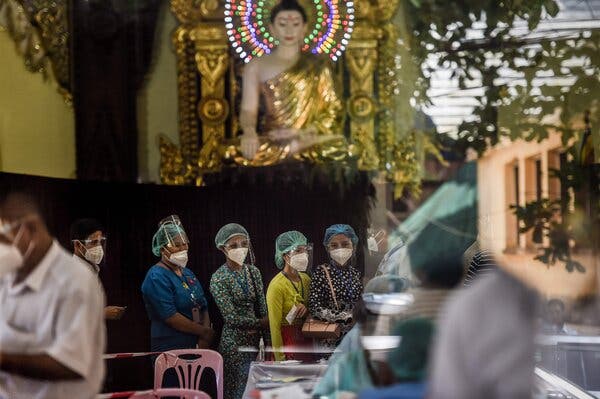 People wearing face shields, face masks and rubber gloves to prevent the spread of the coronavirus, waited to vote during the November elections at a polling station in Yangon.Credit…Ye Aung Thu/Agence France-Presse — Getty Images

What led to the military coup in Myanmar?

Parliament was scheduled this week to hold its first session since the country’s Nov. 8 elections, in which the National League for Democracy, the country’s leading civilian party, won 83 percent of the body’s available seats.

The military refused to accept the results of the vote, which was widely seen as a referendum on the popularity of Daw Aung San Suu Kyi. Ms. Aung San Suu Kyi, the head of the N.L.D., has been the country’s de facto civilian leader since taking office in 2015.

The new Parliament was expected to endorse the election results and approve the next government.

The possibility of the coup emerged in recent days. The military, which had tried in the country’s Supreme Court to argue that the election results were fraudulent, threatened to “take action” and surrounded the houses of Parliament with soldiers.

How was the coup carried out?

The military on Monday detained the leaders of the governing N.L.D. party and Myanmar’s civilian leadership, including Ms. Aung San Suu Kyi and President U Win Myint, along with cabinet ministers, the chief ministers of several regions, opposition politicians, writers and activists.

The coup was effectively announced on the military-owned Myawaddy TV station, when a news presenter cited the 2008 constitution, which allows the military to declare a national emergency. The state of emergency, he said, would remain in place for one year.

The military quickly seized control of the country’s infrastructure, suspending most television broadcasts and canceling all domestic and international flights, according to reports.

Telephone and internet access was suspended in some major cities. The stock market and commercial banks were closed, and long lines were seen outside A.T.M.s in some cities. In Yangon, the country’s largest city and former capital, residents ran to markets to stock up on food and other supplies.

Supporters of the National League for Democracy party held portraits of Ms. Aung San Suu Kyi as they celebrated in front of the party’s headquarters in Yangon in November.Credit…Sai Aung Main/Agence France-Presse — Getty Images

Who is Aung San Suu Kyi?

Her ascension to leadership was seen as a critical moment in the transition of Myanmar, formerly known as Burma, to democracy from military dictatorship. Ms. Aung San Suu Kyi, the daughter of the country’s independence hero Gen. Aung San, spent more than 15 years under house arrest.

Her time in detention made her an international icon and she was awarded the Nobel Peace Prize in 1991.

Since her release, her reputation has been tarnished by her cooperation with the military and her vociferous defense of the country’s deadly campaign against the Rohingya, an Muslim ethnic minority. In 2019, she represented the country at a trial in the International Court of Justice, at which she defended Myanmar against accusations of ethnic cleansing.

Many believed Ms. Aung San Suu Kyi’s cooperation with the military was a pragmatic move that would hasten the country’s evolution to full democracy, but her detention on Monday appeared to prove the lie in the military’s commitment to democracy.