As Myanmar presented a facade of democracy to the world, the generals who had ruled the country for nearly half a century still dominated the economy and the halls of power. They even got away with what international prosecutors say was genocide in their murderous offensives against Rohingya Muslims.

With its pre-dawn coup on Monday — unseating an elected government and putting its leader, Daw Aung San Suu Kyi, back under house arrest — the military, led by Senior Gen. Min Aung Hlaing, was once again flaunting its ultimate authority.

By Monday evening, with most of the country’s civilian leaders detained, the army, known as the Tatmadaw, had unveiled a new cabinet for Myanmar. Every minister was either a former general or a current one.

Yet in the process of reasserting their command, the generals have ripped apart a prized project: a carefully constructed political system decades in the making that allowed them to camouflage their fists behind a veneer of democracy.

The Tatmadaw called it “discipline-flourishing democracy,” an oxymoron baked into its very name. Though they allowed elections, army officers also reserved a quarter of the Parliament’s seats and crucial cabinet positions for themselves.

Veering from that political strategy could be disastrous for Myanmar’s economy, which was already battered by the coronavirus pandemic. The public, which felt like it could express its political aspirations by delivering landslide victories to Ms. Aung San Suu Kyi’s National League for Democracy, is furious. And the international community, which chose to focus more on the civilian part of the country’s civilian-military system, is now aware that one side of the scale clearly outweighs the other. 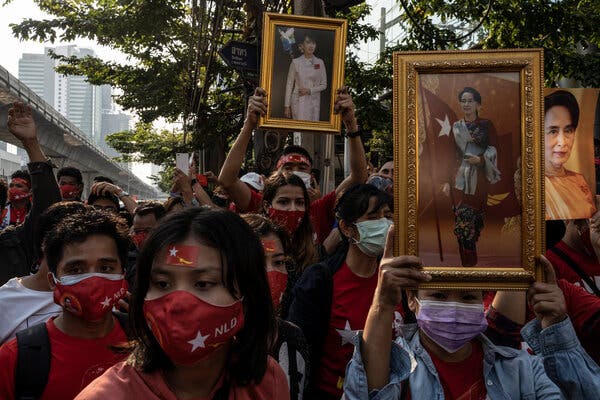 A demonstration outside Myanmar’s embassy in Bangkok on Monday against the detention of Daw Aung San Suu Kyi.Credit…Adam Dean for The New York Times

“With this coup, the military’s entire vision of a hybrid civilian-military democracy, the entire structure, could evaporate, sending the country decades back,” said Gerard McCarthy, a postdoctoral fellow at National University of Singapore’s Asia Research Institute. “And we may have found ourselves in this totally absurd situation because one man, Min Aung Hlaing, felt disrespected by Aung San Suu Kyi and could not put country above ambition.”

Politics in Myanmar are never bound by simple logic. Though the top brass had worked for years to design a system for their enduring benefit, they had also invested just one man — General Min Aung Hlaing — with the power to tear it down.

Myanmar’s modern history is filled with generals who have single-handedly redefined the country’s circumstances. One previous army chief was a megalomaniac whose obsession with numerology crashed the nation’s currency when he decided to denominate it by nine. Another was a slaughterer of student protesters and believed he was the reincarnation of an ancient king.

General Min Aung Hlaing, 64, rose unobtrusively — and largely unremarked — through the army’s ranks, according to some who know him. Early in his career, some of his peers said they stuck him with a nickname that referred to cat feces — something deposited quietly but leaving a powerful stink.

After his rise to senior ranks, and more public stature, he courted the Buddhist laity in Myanmar by financing what will be the largest marble Buddha statue in the country. But the display of piety has done little to mask that the army chief has much to atone for.

Rohingya Muslims had faced decades of persecution under Tatmadaw rule, but it was General Min Aung Hlaing who masterminded a campaign of terror that forced more than three-quarters of a million Rohingya to flee the country. As Rohingya villages burned, nationalists rejoiced at the expulsion of Muslims, who were considered foreign interlopers. The army chief’s popularity soared.

Soon, General Min Aung Hlaing was coveting the position of president, which he hoped to fill after retiring from the army this summer, military insiders said. But since 2015, when Myanmar’s first civilian government was voted in, the presidency has gone to loyal lieutenants to Ms. Aung San Suu Kyi, who is constitutionally barred from the post.

Ms. Aung San Suu Kyi declined to meet the army chief to discuss his political aspirations, her advisers said, a snub that wounded his pride. But if Ms. Aung San Suu Kyi, the daughter of the country’s assassinated independence hero, saw herself as the rightful ruler of Myanmar, so did General Min Aung Hlaing.

For the generals themselves, most of all General Min Aung Hlaing, center, the coup may help them protect the patronage networks they have spent years constructing.Credit…Lynn Bo Bo/EPA, via Shutterstock

Both are products of a country where the Tatmadaw continues to permeate every facet of life, even if its soldiers were rarely in evidence during the coup on Monday.

“The military is woven into the human fabric of Myanmar society,” said Richard Horsey, a political analyst in Yangon, the largest city in Myanmar. “Not only does it have its own schools, hospitals and food production system, its elite are intermarried with business families and N.L.D. families, creating an integrated fabric that’s almost impossible to undo.”

The military’s dominance extends beyond the firepower of its half a million soldiers, whose assaults on ethnic minorities have intensified during General Min Aung Hlaing’s tenure. The country’s two most powerful conglomerates are under army command, controlling a vast fortune that includes jade, timber, ports and dams. The Tatmadaw dabbles in banking, insurance, hospitals, gyms and the media. It is the largest landowner in the country.

It’s no coincidence that the Mytel mobile network was the first to spring back to life on Monday after telecommunications were disrupted nationwide by the coup. Mytel is partly owned by the military.

But the army’s seizure of power is likely to undercut Myanmar’s economic expansion, which bloomed after the generals began loosening their grip on the country. And it will almost certainly lead to renewed economic and personal sanctions from abroad.

The State Department said on Tuesday that it has determined that the military’s actions constituted a coup d’état. That assessment will automatically cut off some U.S. foreign aid to the country, and trigger a review of all aid programs, said State Department officials speaking on background. But the effect of that action will be limited: The United States sends little aid to Myanmar’s government and none directly to its military. American humanitarian and pro-democracy programs will not be affected, the officials said.

Fewer foreign investors will want to risk putting their money in a country where a putsch imperils contracts inked with the civilian authority. The daughter of one prominent tycoon went on social media on Monday, flashing the hashtag #savemyanmar.

The fallout of the coup could further damage an economy already ravaged by the coronavirus pandemic. One survey said that as many as eight in 10 people in Myanmar were already limiting their food intake, as the coronavirus has wiped out key sectors like tourism and garment manufacturing.

For the generals, most of all General Min Aung Hlaing, the coup may help protect the patronage networks they have spent years constructing. The commander in chief’s stalled communications with Daw Aung San Suu Kyi didn’t just foil his political hopes, they also may have put the wealth of his family and partners at risk.

Some powerful generals had retired, only to lose their wealth and status in political purges. General Min Aung Hlaing was determined to shield himself from a similar fate by guaranteeing from Ms. Aung San Suu Kyi a safe exit, military insiders said.

But the leader of the National League for Democracy did not survive 15 years of house arrest by bowing to anyone. And Ms. Aung San Suu Kyi’s character is also steeled by military resolve: Her father founded the country’s modern army, and even though he was assassinated when she was 2 years old, she has called him her political role model. The National League for Democracy was co-founded by another former army chief, and the party places one woman as its undisputed commander.

By Tuesday, Ms. Aung San Suu Kyi was again confined to her villa by the generals. National League for Democracy lawmakers were temporarily sequestered in their living quarters in Naypyidaw, the country’s capital that was built by military fiat early this century.

“We are all still waiting for Daw Aung San Suu Kyi’s command,” said Daw Win Mya Mya, one of the lawmakers. “We will all follow her.”

Flags of the National League for Democracy party in Yangon on Monday.Credit…The New York Times