The Reuters news agency quoted Myo Nyunt, the spokesman for the governing National League for Democracy, as confirming the detentions on Monday. The internet appeared to be down in two major cities in Myanmar.

Myanmar had been celebrated as a rare case in which generals willingly handed over some power to civilians, honoring election results in 2015 that ushered into office the National League for Democracy, whose stalwarts had spent years in jail for their political opposition to the military.

But the army, led by Senior Gen. Min Aung Hlaing, has maintained important levers of power in the country, and the detention of top government leaders appeared to prove the lie in its commitment to democracy.

The turmoil now was ostensibly provoked by concerns about fraud in the November elections that delivered an even bigger landslide to the National League for Democracy than it enjoyed five years earlier. The governing party secured 396 out of 476 seats in Parliament, while the military’s proxy party, the Union Solidarity and Development Party, managed just 33.

The Union Solidarity and Development Party cried foul, as did political parties representing hundreds of thousands of ethnic minorities who had been disenfranchised shortly before the vote because the areas where they lived were supposedly too gripped by strife for elections to take place. Members of the country’s Rohingya Muslim minority, who have been victims of what international prosecutors call a genocidal campaign by the military, were also unable to cast their ballots. 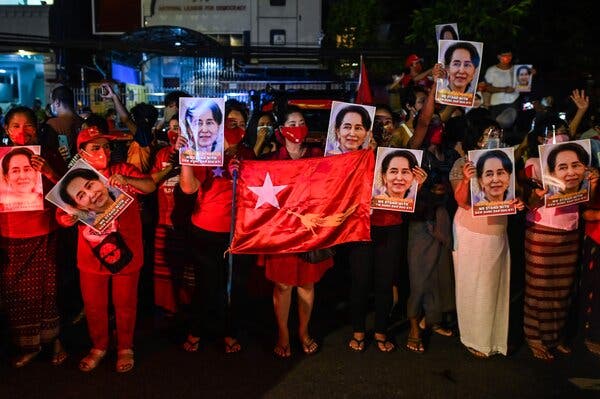 “They should have resolved it from the beginning,” said U Sai Nyunt Lwin, the vice president of the Shan Nationalities League for Democracy, which represents the Shan ethnic group, referring to the bickering between Ms. Aung San Suu Kyi’s forces and the military, which grew after the November election. “But it did not succeed with negotiations, and it reached the stage of a coup.”

In recent years, Ms. Aung San Suu Kyi, once celebrated as an international champion of human rights for her campaign of conscience against the junta while under 15 years of house arrest, emerged as one of the military’s biggest public defenders. Despite a mountain of evidence against the military, she has publicly rejected accusations that the security forces waged a genocidal campaign against the Rohingya.

But with her national popularity enduring, and her party receiving another electoral mandate, the generals began visibly losing patience with the facade of civilian rule that they had designed.

The detention of senior civilian leaders of the government in a pre-dawn raid occurred just hours before Parliament was supposed to begin its opening session after the November election.

The country had buzzed with coup rumors for days, prompting a number of diplomatic missions, including that of the United States, on Friday, to “urge the military and all other parties in the country to adhere to democratic norms.”

“We oppose any attempt to alter the outcome of the elections or impede Myanmar’s democratic transition,” the diplomatic statement said.