The Australia Letter is a weekly newsletter from our Australia bureau. Sign up to get it by email.

It’s the first port of call for any random question that pops into our heads. The repository of basically all knowledge on the internet. The search engine so ubiquitous it’s a verb.

And last week, Australians were forced to consider a future without it, after Google threatened to take its search engine offline if it can’t settle a bitter dispute with the Australian government over the country’s new media code.

I’ve had a bit more time to think about it than most. For the past two weeks, I’ve been among a small number of Australians affected by Google’s new “experiment” where it hides or pushes down links to some local commercial media outlets. The move, ostensibly to “measure the impacts of news businesses and Google Search on each other,” has been interpreted by some local outlets as a chilling demonstration of its power.

In my search results now (Google says the experiment will end in early February), I don’t see any results from media outlets apart from the government-funded ABC and SBS.

I have to admit that for the first couple hours after the change kicked in, I just assumed that media outlets hadn’t published articles on certain topics. It probably says something about market dominance that even as an internet-savvy 20-something, my first thought wasn’t “something’s up with the algorithm” but instead just “it must not exist.”

The experience prompted me to field-test some alternatives: the self-proclaimed “anti-Google” DuckDuckGo and the butt of all search engine jokes, Bing.

The first thing to note is that their search result numbers obviously don’t match up to Google’s. A search for “Scott Morrison” returned over 100 million results from Google, while Bing had just 4 million. DuckDuckGo doesn’t show how many search results it has found, but since most people don’t look beyond the first few pages of search results, that doesn’t make a big practical difference.

Google was also faster at indexing breaking news. On Wednesday morning following an announcement about changes to coronavirus restrictions, Google was the only search engine that pulled up articles from three media outlets written within the last hour; the other two search engines only got one. But searching for news about a government announcement that had been made about six hours earlier returned similar results from all three.

Bing has a similar feature to Google where sometimes (usually if you phrase your search as a question) the first result will be a preview box containing an image and a couple of lines from an article answering your question. This is missing from DuckDuckGo, making it slightly less convenient to use when I wanted quick answers. These previews are part of the current debate over Australia’s media code, with critics arguing that they lessen the likelihood of people clicking into the actual articles, thus hurting media companies while helping Google make more ad money.

It’s also the peripheral features of Google search that make it so useful. When I was searching for coronavirus news, it displayed Twitter accounts of verified government authorities. It has better filtering options — it’s the only one I used that lets you filter news results by any time period you want rather than just “past 7 days” or “past 30 days.” And it’s the only one that lets you enter the name of a shop or restaurant and instantly see its address, opening hours and how busy it’s likely to be at that moment.

Beyond these inconveniences, Bing was a decent search engine. I’ve now been using it as my main search engine for nearly a week and haven’t had any problems doing background research, confirming some statistics or tracking down a government media adviser’s phone number (DuckDuckGo had some problems with the latter).

There’s also a strong argument to be made that other search engines have little incentive to improve while Google maintains such a stronghold, and would step up their game if it pulled out of the market.

But part of the issue for me is also that, despite all evidence to the contrary, I trust Google in a way that I don’t with other search engines. When using something else, I’d find myself wondering: “What if I’m missing something? What if I’m not seeing something I need?” A friend described it as a Coke vs Pepsi situation — a level of loyalty disproportionate to the differences in the product, and maybe a level of loyalty that’s not totally healthy.

What I’ve taken away from the past few weeks is that a Google-less future is possible. It may not be a gut-wrenching shift, and it could lead eventually to more innovation and improvements in how the internet (and journalism) work. But that doesn’t mean any of it will be easy or welcomed.

What do you think of Australia’s efforts to rein in the big American tech companies? How would you react if Google said it was going to stop operating its search engine in your area?

Tell us at [email protected]

And now for this week’s stories: 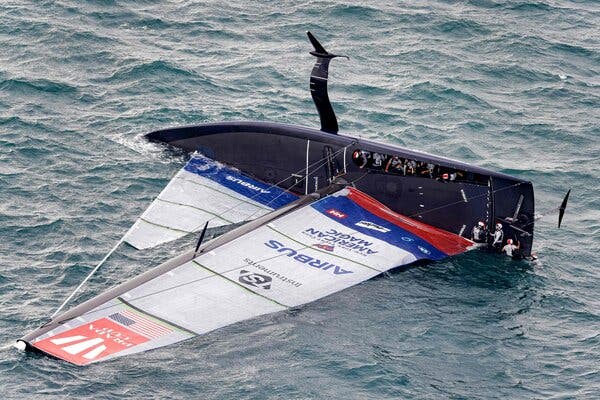 American Magic’s hopes nearly sank with the boat itself after a crash left a hole in its hull.Credit…Studio Borlenghi/Agence France-Presse — Getty Images

A Covid-19 patient at Sharp Grossmont Hospital in La Mesa, Calif., this month. Some patients produce antibodies similar to those produced in more familiar diseases, like lupus. Credit…Etienne Laurent/EPA, via Shutterstock

Enjoying the Australia Letter? Sign up here or forward to a friend.

For more Australia coverage and discussion, start your day with your local Morning Briefing and join us in our Facebook group.