SHANGHAI — As most nations around the world struggle with new lockdowns and layoffs in the face of the surging pandemic, just one major economy has bounced back after bringing the coronavirus mostly under control: China.

The Chinese economy rose 2.3 percent last year, the country’s National Bureau of Statistics announced on Monday in Beijing. By contrast, the United States, Japan and many nations in Europe are expected to have suffered steep falls in economic output.

China’s strength seemed improbable a year ago, when the virus emerged in the central Chinese city of Wuhan. As travel and business ground to nearly a halt, the economy shrank 6.8 percent in the January-March period compared with 2019, the first contraction in half a century.

Since then, the economy has improved steadily, finishing the year with growth of 6.5 percent in the last three months compared to the same period in 2019. While the recovery remains uneven, factories across China are running in overdrive to fill overseas orders and cranes are constantly busy at construction sites — a boom in exports and infrastructure that is expected to drive the economy in the coming year.

At stalls in the Wuhan Taiyuan Textile Market in Hubei Province, garment factory managers have been ordering large swatches of cloth to fill domestic and international apparel orders. At Xuzhou Construction Machinery Group in Jiangsu Province, the plants have been running day and night to keep up with demand for new earthmovers and pile drivers. And at Huahong Holding Group, a large exporter in Zhejiang Province of framed prints and oil paintings, profits have doubled.

“This is the only major economy that quickly recovered from the pandemic and could run business normally,” said Zhou Linlin, a Shanghai financier on Huahong’s board. “So all these orders from everywhere are coming to China.” 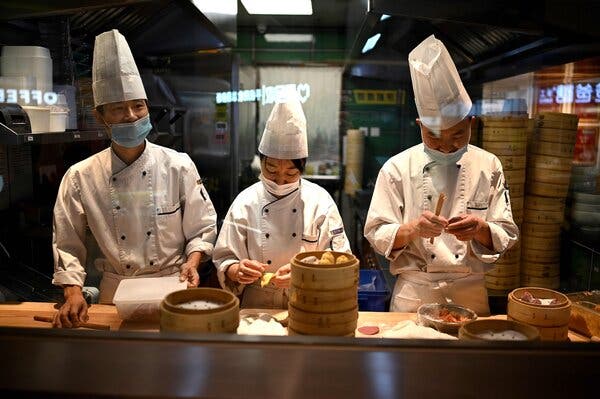 The overall resilience of China’s economy, though, masks pockets of weakness.

Jobs abound for blue-collar workers, but have been scarce for recent college graduates with little experience. Service businesses like hotels and restaurants did well late last year in big coastal cities like Beijing and Shanghai, but never fully recovered in inland provinces. Makers of consumer electronics or personal protective equipment have benefited from the pandemic, but exporters to poor countries devastated by disease have not.

Zhang Shaobo, the owner of a Halloween mask factory in Yiwu, received word last March that one of his most consistent export customers in India was sick with the coronavirus. By May, the man was dead. New customers from Mr. Zhang’s main markets in India and South America also stopped coming to China to look at his latest products.

He laid off all but four of his 20 factory workers, and began making preparations to close his shop at Yiwu’s wholesale market. With business so weak, he said, “I am not going to keep renting it.”

“There are profound adjustments underway to the international economy, technology, culture, security and politics, and the world has entered a period of turbulent change,” Mr. Xi said in the speech, which was delivered in August. “In the coming period, we face an external environment of increased headwinds and counter-currents, and we must prepare to respond to a series of new risks and challenges.”

Those challenges could worsen in the weeks ahead. After considerable success in taming the coronavirus, China has suffered a series of small outbreaks of late. The government has mobilized swiftly, by building hospitals, imposing mass testing and putting at least 28 million people under lockdown.

The authorities are starting to reimpose a wide variety of health checks that are discouraging consumers from spending money. Even before the recent outbreaks, not everyone was prospering. Consumer confidence never fully recovered last year. Chinese families have proved particularly wary of big-ticket expenditures, like home remodeling projects or new furniture.

Lin Jinting, a manual laborer in Wuhan, can usually earn nearly $100 a day carrying heavy loads home for shoppers. Now, many are deferring major purchases, and work is scarce.

“I came here at 8 o’clock this morning and I haven’t had any orders today,” he said on a recent afternoon.

Keeping the virus at bay has been critical to China’s economic success over the past year. While the pandemic ravages other nations, Beijing’s aggressive top-down approach kept the virus from spreading rapidly across the country.

Mary Wu, a 26-year-old saleswoman in Jiande in southeastern China, was only allowed to leave her apartment once every three days during a lockdown last spring. Local schools closed for her children, aged 4 and 9. But life quickly returned to normal, schools reopened and Ms. Wu and her family began eating out again.

Ms. Wu even sent her elder child to extra classes to make sure that he caught up on any ground he lost. She no longer worries much about the virus.

“We all wear masks,” she said.

Yiwu in China is known among international traders as the global epicenter of festive decorations.Credit…Alex Plavevski/EPA, via Shutterstock

With the virus largely under control, Beijing has relied on its old playbook to rev up the economy.

When Wuhan was still under lockdown, the authorities moved to get manufacturing up and running again in other areas. They provided long-haul buses to get workers back from their home villages to factories after Chinese New Year. State-owned banks extended special loans to factories, while many government agencies gave partial refunds of business taxes that had been paid before the pandemic.

Already the world’s largest manufacturer, China widened its lead this year. Despite the trade war and tariffs, American and European companies turned to China parts and goods, when factories elsewhere struggled to meet demand. Factories within China turned to nearby suppliers to replace imports as transoceanic supply lines became less dependable.

The “Made in China” label has been especially popular as people stuck in their homes have redecorated and renovated. At the Xingxing Refrigeration factory in Taizhou, managers can’t hire workers fast enough to keep up with strong demand for freezer chests for people who want to store more food during pandemic lockdowns.

Shoppers outside an Apple store in Shanghai. Consumer spending has mostly rebounded from the pandemic, but has not surged ahead as strongly as industrial production.Credit…Keith Bradsher/The New York Times

The consumer electronics sector in China is especially strong right now, for white-collar and blue-collar workers alike. When American managers were no longer able to travel to China last spring to oversee tech projects, demand surged for electronics project managers who were already in China.

“Companies were scooping up anyone they could find,” said Anna-Katrina Shedletsky, the chief executive of Instrumental, a remote quality monitoring system used by global brands to track and manage electronics manufacturing.

Beijing also ramped up its infrastructure spending. Every major city in China was already connected with high-speed rail lines, enough to span the continental United States seven times, but new lines were rapidly added last year to smaller cities. New expressways crisscrossed remote western provinces. Construction companies turned on floodlights at many sites so that work could continue around the clock.

Exports and infrastructure fueled much of the growth over the past year. China’s exports grew 18.1 percent in December compared with the same month a year earlier, and were up 21.1 percent in November. Fixed-asset investment in everything from high-speed rail lines to new apartment buildings climbed 2.9 percent last year.

Both are expected to power the economy in 2021.

The Chinese Academy of Social Sciences predicted last week that the country’s economy would expand 7.8 percent this year. If it does, it would be China’s strongest performance in nine years.