It all started with a single sentence in a blog post about Iceland: “A farmer is looking for support at a weather station and sheep farm.”

It was 2012, and, after studying photography in the industrial German city of Dortmund, I was ready for a change. I’d long planned on visiting Iceland, and when I read about the secluded farm, everything came together. I replied to the post, landed the job, sold most of my things and booked my flight. 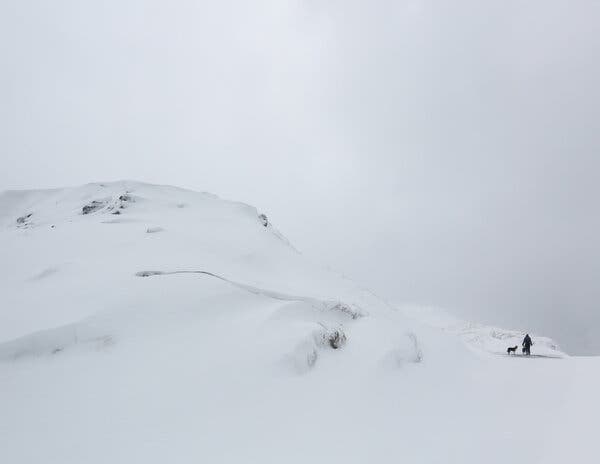 Marsibil Erlendsdottir runs a farm and a weather station in eastern Iceland. She walks her border collies three times a day for at least one hour, regardless of the weather.

Various equipment, including a horse harness and a pair of snow shoes, hang near the entrance of the house.

Marsibil Erlendsdottir, the farmer and weather station attendant, picked me up at the small airport in Egilsstadir, near Iceland’s easternmost edge.

The drive to the weather station took nearly two hours — through snow-covered mountain passes, alongside waterfalls, past reindeer and empty summer houses. As we neared our destination, the road grew narrow and rough. Finally, we arrived at the end of an isolated fjord, where a small yellow lighthouse appeared in the distance.

“Welcome to the end of the world,” Ms. Erlendsdottir said, laughing.

Horses in front of one of the farm’s two barns.

The Icelandic Meteorological Office runs 71 manned weather stations around the country, 57 of which report the precipitation, snow depth and ground cover once per day. Ms. Erlendsdottir, who goes by Billa, oversees one of the 14 stations that also report on cloud cover, weather conditions and other meteorological phenomena.

Every three hours, day and night, no matter the weather, Billa checks the readings on the weather instruments at her station and relays them — temperatures, air pressure, wind conditions, and others — to the office in Reykjavik.

Her reports, along with those from the rest of the country, are published online and broadcast over the radio. For farmers who rely on the forecasts, the information Billa provides can help dictate their daily work. For fishermen on the high seas, the information can be the difference between life and death.

Storms often bury everything under a layer of snow — even the windows and doors.
In winter, most of the day is spent inside.

There has been a weather station in this area since 1938, and it has always been operated by real people. (Given the region’s harsh conditions, automation wouldn’t be possible, Billa says.)

The region is incredibly remote. In the coldest months of the year, the farm is only accessible by boat and, when storms hit, can be cut off from the outside world for days on end.

The aurora borealis over a path that leads past the second stable — and, eventually, to the nearest small town.

Billa grew up at the weather station with her brother and five sisters. She married one of the local fishermen and had a family of her own, raising two children — one of whom, her son, was born on a boat on the way to the hospital.

Billa’s husband died in recent years, leaving her to run the weather station and the farm on her own. Billa could easily have left the place, but she decided to stay.

“It never gets boring here,” she said.

Rams on the farm.

I initially worked with Billa for 10 months. Having grown up on a farm in Poland, I found much of the work familiar: caring for the sheep, helping to train the Border collies, repairing fences, gathering hay.

Ewes inside the barn.
When tanning sheepskin, the hide is stretched in wooden frames. Holes are made in the skin every two inches at a finger-width distance from the outer edge. The skin is then stretched with a sturdy cord by pulling on its opposite edges — first up, then down, then left, then right, and so on.

Billa doesn’t enjoy the spotlight. It took more than a year before she was comfortable enough for me to take her portrait.

In the meantime, I began documenting her life and work, following the rhythm of her days — and of the weather reports.

Billa with one of her sheepdogs. She usually keeps around 10 Border collies on the farm.
She uses an all-terrain vehicle to transport heavy items from one barn to another, and to check on her land.
Billa heads outside at night to complete a weather report.

Like Billa, I enjoy spending time off the grid, and so I kept returning to the farm, where there is no cellphone reception. In total I’ve spent around two and a half years there.

Lambs in the spring.

The area becomes especially inaccessible in the winter months, when the daylight lasts for only a few hours and the lighthouse’s constantly spinning beam cuts through the darkness.

For months on end, the farm is blanketed by snow, and sounds are muted — except the sound of the surrounding sea. In winter, the crushing waves become progressively wilder, the wind ever stronger, the weather conditions less predictable.

But even in the harshest snowstorm, Billa leaves her house to care for the animals and check the instrument shelter.

Snow-covered hay bales sit in front of one of the barns.

Every season brings its own tasks. In spring, when the sheep give birth, the animals need to be monitored 24 hours a day. In summer, the hay for the winter months has to be collected. And during the autumn, the sheep are carried down from the mountains.

In addition to all the farm work, Billa also maintains the lighthouse, which was built in 1908. Her store cupboard must always be well stocked, given that the nearest supermarket is 50 miles away.

Billa returns to her house after feeding the rams. Whenever she’s outside, she takes at least one dog with her.

In the winter, it takes an hour by boat to get to the nearest shops. A mail boat comes once every two weeks, but only when the weather conditions allow it.

The circumstances here are immensely demanding, but living in harmony with nature provides Billa with a sense of inner peace. She can’t sit still and spends as much time as possible outside.

A few years ago, Billa’s daughter, Adalheidur, who goes by Heida, finished her studies in Reykjavik and moved back to the farm to accompany and help her mother.

“If I ever moved away, my mother would definitely stay here on her own,” Heida said.

A clothesline near the house.