NAIROBI, Kenya — Militants with the extremist group al-Shabab stormed a major hotel in the Somali capital Mogadishu on Sunday evening, the authorities said, raising fears of growing violence in the Horn of Africa nation as it faces a bitterly contested election season and the withdrawal of American troops.

The attack, which began at around 5 p.m. local time, took place at the Afrik Hotel, which is on the road to the city’s major international airport and a popular meeting place for politicians, lawmakers and members of the security services.

Images and video shared on social media showed smoke billowing into the blue skies. Heavy gunfire and blasts were heard in the hotel’s vicinity, according to Ismael Mukhtar Omar, the spokesman of Somalia’s ministry of information.

Authorities said that the Shabab militant group, which is Al Qaeda’s most powerful ally in Africa and has wreaked havoc across East Africa, carried out the attack. Security forces were continuing to engage them inside the hotel Sunday night. A Somali police spokesman, Sadiq Adan Ali, said in a statement that most of the people who were at the hotel had been evacuated.

Abdulkadir Adan, the founder of Aamin Ambulance, Mogadishu’s only free ambulance service, said in a text message that his team had removed the bodies of two people killed in the attack, and had taken another 11 who were injured from the site of the violence. 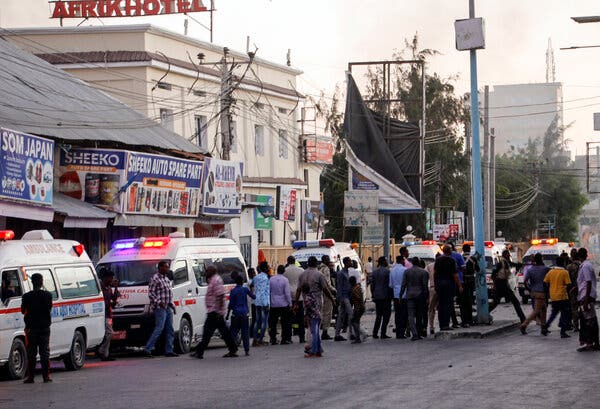 The attack came just weeks before a crucial parliamentary and presidential election that has been plagued by disputes over how to properly conduct the voting, creating an impasse that risks delaying the vote and pushing the government past its constitutional term limit.

The disagreements, embroiling the federal and regional governments and opposition parties, have alarmed the United Nations, the United States, the European Union and African states, which have called on the various parties “to resolve the remaining electoral implementation issues in order for credible and inclusive elections to proceed.”

The elections were scheduled for Feb. 8, but that timeline looks unattainable now. President Mohamed Abdullahi Mohamed has called on regional leaders to meet starting Monday to deal with the electoral crisis.

The tensions over the elections came to the fore last week after heavy infighting broke out between Somali forces and those from the southern region of Jubaland. Somali officials blamed the violence on groups backed by neighboring Kenya, allegations that officials in Nairobi denied. Somalia has severed diplomatic relations with Kenya after accusing it of meddling in its internal affairs.

Somalia is facing a host of other crises, including the coronavirus pandemic, swarms of desert locusts that are destroying crops, and the displacement of tens of thousands of people by seasonal floods late last year.

The Shabab militant group also continues to remain a threat, targeting civilians, government officials and peacekeeping forces besides carrying out attacks on restaurants, hotels and other establishments.

The Qaeda-linked group has financial muscle, too, as is collects millions of dollars in tariffs and payoffs to finances its operations, according to a United Nations Security Council report from last year. The group has been moving this money through Somalia’s banking system and is investing in local businesses and real estate.

Former President Trump, in the waning days of his term, announced an abrupt withdrawal of the 700 American troops from the country, leading observers to worry the pullout would embolden the Shabab and push them to carry out more attacks against the weak but internationally-backed government.