MEXICO CITY — Authorities in Mexico have arrested a dozen police officers for the massacre of 19 people, including several migrants, an incident which the country’s interior minister said Wednesday was part of a larger pattern of migrant abuse at the hands of government agents.

The 12 officers, part of the police force of Tamaulipas, a state along the United States-Mexico border, were arrested on Tuesday and charged with homicide, abuse of authority and providing false information, authorities said.

The killings last month in Tamaulipas were “completely unacceptable,” the interior minister, Olga Sánchez Cordero, said at a morning news conference on Wednesday, adding that any complaints of abuse by Mexican police should be fully investigated. Migrants “are being harassed” she added, and “many women have been abused and raped.”

Mexico has suffered record levels of violence in recent years, with more than 30,000 people killed last year alone. President Andrés Manuel López Obrador campaigned on a promise of stanching the bloodshed with “hugs not bullets” but has thus far been unable to make a meaningful dent in the carnage.

Extrajudicial killings, torture and abuse by the police are hardly uncommon: In 2014, a group of 43 students disappeared from the town of Iguala in Guerrero state, with both police and military implicated in the still-unsolved crime.

Migrants are regularly caught up in the bloodshed when traversing the country, facing abuse from both criminal gangs and from corrupt officials who often work in tandem with the gangs, but who are almost never held accountable.

The arrest of government agents for this latest massacre has sent shock waves through the country as one of the first times local police have been charged with such a horrific crime.

“There has always been suspicion and statements from migrants of the abuses committed by some law enforcement officers, but never has the evidence been so strong,” said José Carmona Flores, a former government official and president of the National Council of Lawmaker and Migrant Leaders, a local advocacy group. 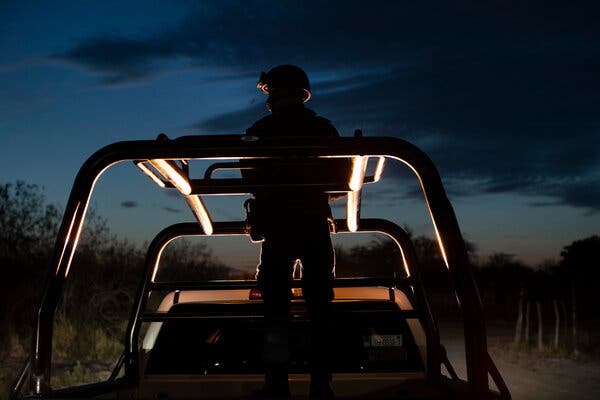 The arrests come after the charred remains of 19 people were discovered by authorities last month inside a burned pickup truck some 40 miles south of the United States border. The vehicle was riddled with bullet holes, but authorities grew suspicious when nearly no spent casings were found, suggesting that whoever had committed the killings had collected and removed the shells in order not to leave evidence behind.

State authorities also indicated that there were discrepancies between what police had stated in their report regarding the incident and what was revealed in interviews with suspects, as well as in evidence from surveillance footage and geolocation data.

“All these elements shaped the probability that at least 12 state police officers participated in this situation, in these events,” said Luís Alberto Rodríguez Juárez, a spokesman for the Tamaulipas state government.

Mexico’s northern states, where cartels operate with impunity, have become particularly deadly in recent years for migrants, mostly from Central America, who are trying to reach the United States.

In 2010, 72 migrants were massacred in Tamaulipas, at the time one of the deadliest events involving migrants in recent memory. The following year, almost 200 bodies were found dumped in mass graves near the town of San Fernando.

Migrants are sometimes kidnapped by violent criminal groups and forced to work for the cartels. In other cases, they pay exorbitant fees to have gang members help them cross into the United States. Criminal groups also fight fiercely over territory and smuggling routes, with vulnerable migrants sometimes caught in the crossfire.

Law enforcement officers, often on cartel payrolls, have been known to participate in or cover up crimes.

All too often, the mixing of masses desperate migrants, organized crime and corrupt police ends the same way: Northern Mexico is littered with the bodies of people who never made it to the United States.

It is not yet clear whether that will include reversing the Trump administration’s “remain in Mexico” policy, which required migrants seeking asylum in the United States to stay south of the border while awaiting the outcomes of their cases. The policy has resulted in tens of thousands of migrants living in squalid conditions along the border, often leaving them prey to violence and extortion by drug trafficking gangs.

Relatives of the Guatemalan migrant Rivaldo Danilo, who is believed to be among the 19 people killed in Mexico, in Tuilelen village, Guatemala last month.Credit…Johan Ordonez/Agence France-Presse — Getty Images

The United States has spent millions of dollars training Mexican security forces and cooperating with them across their long shared border to stem migration flows. But experts say that without thorough reform of Mexico’s security forces to break their ties to organized crime, migrants will continue to be easy prey for extortion.

Mexican officials said that so far, only four of the charred bodies had been identified: two Mexicans with a history of people smuggling, and two migrants from Guatemala. Authorities also said the burned-out truck may have been part of a convoy of vehicles carrying migrants from Guatemala and El Salvador. The whereabouts of the rest of the human cargo is still unknown.

A second charred truck also discovered at the scene belonged to one of the dead smugglers, according to authorities. The Tamaulipas attorney general, Irving Barrios Mojica, said the same vehicle had been at the scene of an incident in December, when police in neighboring Nuevo León state detained 66 migrants.

The truck was taken into custody by the National Migration Institute, but returned to its owner just days later, authorities said, raising suspicions that federal authorities may also have been involved, Ms. Sánchez said at a new conference on Monday.

The mass killing has caused a stir in Guatemala, with the country’s foreign ministry on Tuesday calling on Mexican officials to solve the case and condemning the “atrocities committed in the Tamaulipas massacre.”

Villagers in the southern municipality of San Marcos have said they believed their relatives were among the victims of the attack. Some told local media they received a phone call on Saturday, Jan. 23 from a people smuggler saying that all the migrants were dead.

According to President Alejandro Giammattei of Guatemala, his government has received 32 DNA samples from people who fear their relatives are among the dead. Two of the Guatemalans killed may have been people smugglers, according to Mr. Giammattei.

“The way the bodies are, it is impossible to recognize them, they are totally charred,” he said.