MEXICO CITY — A day after the news that Mexico’s president had contracted Covid-19, frustration rippled through the line of Mexicans anxiously waiting Monday to refill tanks of oxygen for relatives who were suffering from the same illness and gasping for air at home.

For nearly a year, Mr. López Obrador had minimized the pandemic, claiming that religious amulets protected him, refusing to wear masks and even drinking from the same clay pot as supporters. It was only a matter of time until he got sick himself, some Mexicans said.

With the president now infected, what most aggrieved many Mexicans was not only that he had flouted basic safety precautions, but that he also may go back to playing down the threat that the surging pandemic poses after his own illness.

They noted that with top-notch medical care delivered at his living quarters, the president may well recover. But their loved ones, on the other hand, will struggle to get the most basic care, whether a bed at an overflowing hospital or just the supplies like oxygen that might help them survive at home.

“My dad believed him — he believed him that nothing would happen by not wearing a mask,” said Lilia Ramírez Díaz, who was making the second trip of the day to refill an oxygen tank for her diabetic father, battling Covid-19 at home.

“They both got sick,” she said, but the president “doesn’t have to go around looking and begging for an oxygen tank.”

A devastated Mexico is struggling to rein in the pandemic. Three days before the president disclosed his own infection on Sunday, the authorities announced more than 1,800 coronavirus deaths, breaking the record of single-day deaths set just days earlier. 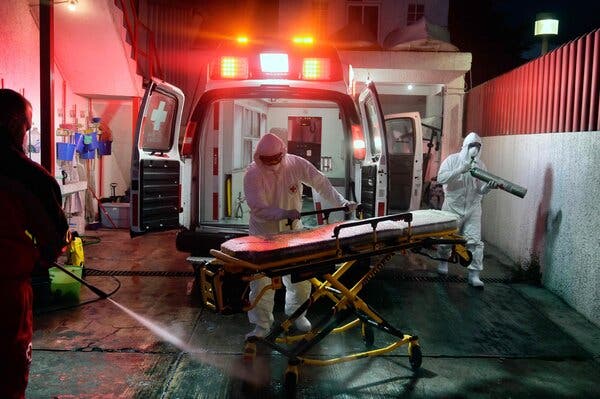 Paramedics in Toluca, Mexico, sanitizing an ambulance after transferring a patient infected with the coronavirus.Credit…Alfredo Estrella/Agence France-Presse — Getty Images

In Mexico City, hospitals are at 89 percent capacity. according to the most recent health ministry figures, while nationwide, the figure is 60 percent. Across the country, more than half of all hospitals beds with ventilators are full.

So far, more than 1.7 million people have contracted the virus in Mexico and more than 150,000 people have died. That is the fourth-highest death toll in the world. And some experts believe the real toll may be far higher.

Amid widespread mistrust of hospitals, many infected people choose to stay home — and often die there. The cause of death may not be listed as Covid-19. That, combined with the country’s low levels of testing, means the pandemic’s true toll is most likely far worse than the official one.

While Mr. López Obrador said Sunday that his symptoms were mild and that he “remained positive,” doctors warned that the 67-year-old heart attack survivor was in a high risk category.

And it remains to be seen if his own bout with the virus will change the Mexican leader’s attitude toward it.

Mr. López Obrador is not the first world leader to fall ill with coronavirus.

Early last year, Prime Minister Boris Johnson of Britain famously persisted in shaking hands with Covid-19 patients only to be admitted to a hospital himself after contracting the disease.

Mr. Johnson emerged from his health emergency experience sounding chastened, and with a new, intimate awareness of the virus’s danger. He went on to embrace mask wearing and lockdowns and other measures designed to help stem transmission.

But in Mexico, some public health experts fear their leader will go more the way of former President Donald J. Trump, who beat the virus last year and then continued to play down the pandemic and undermine health officials’ recommendations.

Waiting to refill oxygen tanks in Guadalajara.Credit…Francisco Guasco/EPA, via Shutterstock

And if Mr. López Obrador recovers and then points to his own experience to dismiss the danger, it may help worsen Mexico’s surge in cases, warned Laurie Ann Ximénez-Fyvie, the head of the molecular genetics laboratory at the National Autonomous University of Mexico.

“If López Obrador comes out of this saying: ‘See? I’m an old person with high blood pressure, and see how well I did? Let’s get back to business as usual,’ then that could really push us over the edge,” Dr. Ximénez-Fyvie said. “People could drop their guard even further, be more reckless.

“And the president has already done everything possible to make people drop their guard as it is.”

With a fragmented and weak opposition, there is little robust resistance to Mr. López Obrador’s policy prescriptions. The ruling party, the National Regeneration Movement, was founded by Mr. López Obrador and he holds great sway over its officials, who are said to take off their masks when they’re around the president to avoid upsetting him.

Even if Mr. López Obrador changes his message and urges citizens to take precautions, it may not work.

“In Mexico it is very hard to impose closures now, because a lot of the economy is not formal,” said Dr. Alejandro Macias, an infectious-disease expert. “The government may regulate the formal economy, but that ends up increasing demand for the non-regulated, informal economy.”

The government had hoped to secure enough vaccine doses to roll out an ambitious program to vaccinate most frontline health care workers by the end of February. But that program came to a standstill last week after Pfizer said it could no longer meet its promise to distribute 1.5 million doses to Mexico. By Monday night, slightly more than 640,000 doses had been administered across the country.

On Monday, Mexican officials spoke with their Russian counterparts to secure 24 million doses of the Sputnik V vaccine, but health experts caution that the Russian vaccine’s efficacy and safety cannot be guaranteed.

“Mexico has been flying blind throughout this pandemic,” said Dr. Ximénez-Fyvie. “And now we are flying blind with the vaccine.”