Anybody in recovery could tell you that, for dealing with negative emotions, food or alcohol or drug addiction, there is a familiar and handy acronym known as HALT. The letters stand for a cluster of triggering feelings manageable if you can just tick through and address an inventory of basic human needs.

One year into the pandemic, the whole strung-out world could probably use some form of H.A.L.T., not least designers charged with producing a vision of a future whose shape is impossible to discern. Thus, it was fascinating to learn from a variety of them how they’d coped with the long months of isolation — of being, in one form or another, Hungry, Angry, Lonely or Tired.

Rick Owens spent what he called this “very, very dark” time at home in Paris contemplating masculine aggression, principally his own. Paul Smith passed 18 weeks alone in a souvenir-cluttered office at his London headquarters, where normally scores of people are employed, musing on the mods, the rockers, the hippies, the shifting fads and tumultuous events he has witnessed through five decades in fashion. Véronique Nichanian, the designer of Hermès men’s wear, found herself using the therapeutic powers of color to steady her through the jagged rhythms of serial lockdowns.

Effectively grounded after years of ceaseless global travel, Virgil Abloh, the Louis Vuitton men’s wear designer, turned his consciousness inward to compose a kind of anchoring autobiographical mixtape spliced together from the varied pieces of a multi-hyphenated identity. 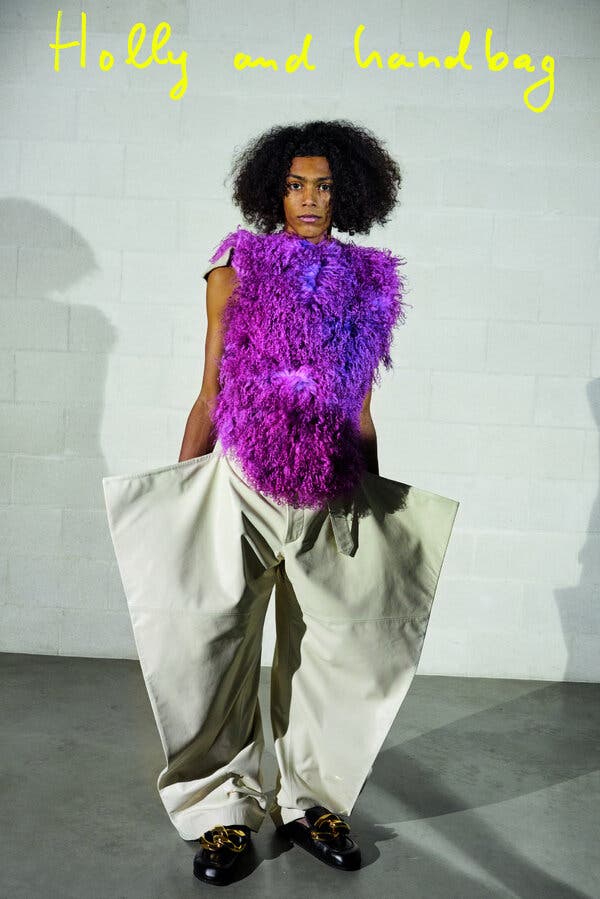 Jonathan Anderson, shuttling on the Eurostar between London and Paris to produce two separate collections — one for his own label, JW Anderson, and another for Loewe — managed the stress of constant Covid-19 testing and risky travel by musing on root vegetables, handicrafts and George Ohr, the visionary American ceramist known as the “Mad Potter of Biloxi.”

And they all cranked. What emerged from a week of collections experienced largely through video (although, as he did last season, Mr. Anderson trumped all things digital by producing fantastically conceptualized analog books) was a powerful sense of hive mind, of creative people as unalike as can be imagined unified by a belief in the power of making.

Sure, there were the usual narrative conceits, the designer references and citations that can often seem plucked from some cultural go-bag (most absurdly, perhaps, at Louis Vuitton, where the theme of Mr. Abloh’s sixth collection was “Tourist vs. Purist” and the title of the show was “Ebonics’’). What stood out, though, was not the predictable mood-board cockamamie but emblematic images.

At Mr. Abloh’s Vuitton show, for instance, there was the indelible vision of a model kitted out like some intergalactic cowpoke in a brightly patterned and quilted skirt suit adorned with a large cloth rose. On his head was a 10-gallon hat so wide brimmed it would make the average Stetson look like a beanie. Feet shod in embroidered steel-toed boots, he had beside him a quilted silver logo suitcase that made you want immediately to book a ticket to anywhere just for the thrill of wheeling it through an airport.

At the JW Anderson collection, delivered as a series of posters photographed by Juergen Teller, Mr. Anderson’s continuing explorations of shape, proportion, texture and the crafts coalesced in the image of a pale starveling dressed in trousers whose widely flanged legs lent him a resemblance to a Watteau jester as reimagined by Braque.

Covering the model’s top half was a shaggy vest of brightly dyed shearling; encasing his feet was a pair of blunt-toed loafers adorned with the Brobdingnagian buckles Mr. Anderson refers to as shoe jewelry.

“I like the idea of humor in clothing,” Mr. Anderson said on a Zoom call, referring to the halved peaches he had printed on T-shirts and the bulbous cloth radishes he appended to sweaters and hoodies. Of the crocheted vegetables deployed throughout the collection, he said: “I spent a lot of the last year thinking about people making and doing.”

Though the intense, almost meditative repose that arises out of the repetition of familiar gestures is not lost on those who have knitted or sewed or baked their way through the pandemic, it is not something one automatically associates with a designer as ostensibly hard-edge as Rick Owens.

Yet, at various points during Mr. Owens’s show — filmed outside a Fascist-era war memorial on the Lido near Venice, where he spends his summers — the masked designer can be seen arranging and rearranging the models’ clothes before they exit with an intensity of focus that draws the eye away from everything else going on. There is not much about the designer’s gestures to suggest anything resembling masculine aggression. If anything, they seem maternal.

In all likelihood it is the softness beneath the kinky, zippered bodysuits of leather; the quilted and hooded cashmere carapaces; the slashed overcoats and cow-skin platform boots made with the hairy side facing out that gives Mr. Owens’s ideas their tensile strength.

He may create clothes capable of spooking you with their Sweeney Todd aura or look of flensed anatomies. But there is usually just enough revealed flesh to remind you of how nature goofed when evolving the human body as soft and furless and more vulnerable than we like to believe.

Indomitable sunniness serves as a form of armor for Véronique Nichanian and Paul Smith, two designers seasoned by years of survival in a business that makes short work of anyone lacking a tough hide. Optimism is what each designer spoke about over the phone before their collections were shown last week, utilized as a strategy.

“I wanted to look past the moment” and to anticipate the spirit of what comes next, Ms. Nichanian of Hermès said, invoking such a time with bright colors that to her symbolize hope.

Reunited for a second time with the theater director Cyril Teste, Ms. Nichanian staged a version of a live show in some antechambers and around an interior staircase at the Mobilier National, a storehouse of state-owned furniture on the outskirts of Paris.

Though a sectioned split-screen format provided multiple angles from which to view the clothes, it was hardly necessary. It is always clear in advance that whatever Ms. Nichanian produces will have a restraint it takes an assured hand to deliver and that, even when the stuff is as staid or workmanlike as the saddle-stitched parkas, piped blousons and elevated work wear she showed this time around, that is probably not a bad thing at a house where the watchword is continuity, not experimentation.

Paul Smith, too, fell back on experiences accumulated over a half-century in the business to deliver a collection that shrewdly amalgamated elements from his own back pages, including suits that might have been designed for the Kray twins, mohair knits, high-waist mod trousers, plaid chore coats and dusterswell adapted for the post-office world. He explained his process with a common-sensical perspective that echoed the wisdom of H.A.L.T.

“I was here in my office alone,” the designer said by telephone from London. “And I thought, ‘Well, I’m not going to museums or traveling, but I do have all these things around me in this room full of bicycles and books and stuff I’ve accumulated over the years.’” Sooner or later we will be released again into the wider world, he concluded.

After doing an emotional check-in, he decided there were worse ways to cope than by rummaging around in memory’s familiar landscapes until then.