Conor McGregor first met Dustin Poirier in the Ultimate Fighting Championship octagon in 2014. Like so many other McGregor opponents, Poirier, then considered the superior fighter, was vanquished quickly, with a left hook to the head and a series of punches on the ground that prompted the referee to stop the fight in less than two minutes.

They will meet again in Abu Dhabi, United Arab Emirates, early Sunday at U.F.C. 257, with Poirier once again ahead in the official rankings though a clear underdog among oddsmakers. But while Poirier’s career has slowly ground forward over the past six-plus years, McGregor came to own the sport and its huge audience. He achieved superstardom, won multiple U.F.C. championships and fought Floyd Mayweather in one of the most lucrative boxing matches ever.

But the last few years of McGregor’s life have been dominated by legal troubles, in both Europe and the United States. He pleaded guilty to assault for punching a man at a bar in Ireland, his home country, while promoting his new brand of whiskey. He was put on probation in New York for hurling a dolly at a bus the week of a bout, breaking a window and injuring a fighter. He was investigated by law enforcement in a number of other accusations of violent behavior.

One case, which did not result in charges after the police in Ireland investigated for more than a year, will inevitably loom over McGregor, 32, and the U.F.C. in Abu Dhabi, and elsewhere in the future.

In early January 2019, a woman in Dublin, Ireland, told the police she had been raped by McGregor a month before. A statement of claim in a lawsuit the woman filed against McGregor this week described her perspective of the encounter in graphic detail. An examination at a hospital shortly after the encounter, the statement said, found bruising over her entire body.

U.F.C. officials have declined to comment about the case. In a news conference on Thursday, McGregor called the lawsuit filed on Monday “old news.”

“It was investigated thoroughly over the course of two long years, and I was cleared of any wrongdoing, and that’s it,” McGregor said. “There’s so much positivity in my life, I have a great challenge ahead of me Saturday night.”

Though prosecutors declined to bring criminal charges, they did not clear him of wrongdoing and the lawsuit will be heard by a jury if it goes to trial.

With McGregor in legal limbo, the U.F.C. will also be in a holding pattern — hopeful but uncertain about whether it can count on regular performances from the biggest star in its history.

As the case was investigated by the police in 2019 and 2020, McGregor largely disappeared from the public eye, at least by the standards of how voluminously he previously grabbed the spotlight. He announced a retirement from fighting in March 2019, only to quickly change his mind and book a fight against Donald Cerrone, who is nicknamed Cowboy, one year ago.

The run-up to that bout was the first time McGregor addressed the case, which the police were still investigating.

When he was asked about it at a pre-fight news conference, hundreds of fans in attendance booed, and the U.F.C. closed ranks around its star. Cerrone, his opponent, interrupted to say that only questions about the fight were allowed, and the U.F.C.’s president, Dana White, said McGregor had already answered the question in an interview with ESPN, the U.F.C.’s corporate media partner.

McGregor beat Cerrone decisively, then did not fight again in 2020, as the U.F.C.’s lightweight division mostly moved on without him. The power-punching Justin Gaethje emerged as a challenger, only to lose decisively to the reigning champion, Khabib Nurmagomedov, who promptly retired. Poirier, who had lost to Nurmagomedov in 2019, defeated Dan Hooker in June to catapult himself back up the lightweight rankings. Charles Oliveira put together a winning streak to become a contender.

The U.F.C. suddenly lacked a clear hierarchy in a marquee weight class, 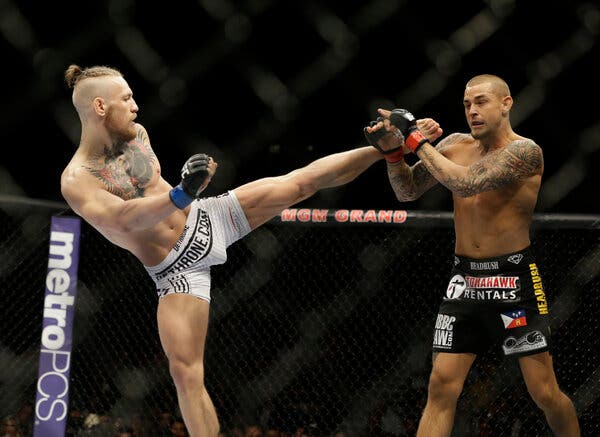 McGregor’s 2018 fight against Nurmagomedov was perhaps the biggest bout in U.F.C. history, built up by antics that veered far outside the scope of competition.

Trash talk from McGregor ahead of the fight escalated in unusually personal ways — he used a racist slur in a tweet while talking about Nurmagomedov’s wife. Nurmagomedov responded later — by jumping out of the cage after his victory and attacking McGregor’s training partner.

White and McGregor, of course, wanted a rematch, and U.F.C. helped chart a path for McGregor to fight three times in 2020 as a buildup. But McGregor fought just once, in part because of the coronavirus pandemic, and other fighters seemingly surpassed him in skill.

When Nurmagomedov retired in October, after his father’s death following complications from Covid-19, matchmaking discussions throughout the sport had to be reframed.

Last weekend, before the U.F.C.’s first-ever card televised on ABC, White said he had spoken to Nurmagomedov and “had a feeling” that if either McGregor or Poirier — or the fighters in the other lightweight bout on Saturday’s card, Dan Hooker and the U.F.C. newcomer Michael Chandler — displayed superior skill, Nurmagomedov would end his retirement to fight them.

But this week, Nurmagomedov said he didn’t have plans to fight in the future. And so the U.F.C.’s hopes — for Saturday’s card, for future pay-per-view fights, for the lightweight division — rest more heavily upon McGregor.

If Poirier wins, he will be in line for a shot at a title fight, and McGregor would sink farther down the lightweight division’s rankings, with two losses in just three U.F.C. appearances in the past four years.

But if McGregor wins, he will probably get that title shot, and the U.F.C. will get another lucrative pay-per-view match — regardless of where questions about McGregor’s personal conduct stand.